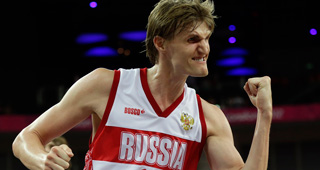 After spending the 11-12 lockout shortened NBA season in Russia with CSKA Moscow, Andrei Kirilenko was all smiles as walked through the Barclays Center and sat in front of his locker.

Kirilenko discussed his return to the NBA from Russia and what the future holds for basketball in his country.

“When I signed with the Russian team, it was a lockout season and I thought it was a great chance for me to play in Russia in front of Russian fans and my family and friends since I’m still the right age,” said Kirilenko. “I had the chance and I used it.”

Being close to his family was enticing for Kirilenko, but he also remained overseas to represent his country in the best physical condition on the grandest stage of all.

“They (NBA) played like 66 games in a season in a short period of time and the Olympics was coming,” said Kirilenko. “I kind of decided I’m going to finish the season in Moscow and then I’m going to move back to the NBA.”

The move paid dividends for Kirilenko and his country.

Kirilenko won his second EuroBasket medal, a bronze, in 2011, and helped CSKA finish as the Euroleague runner-up. Kirilenko then led Russia to it’s first medal, a bronze, since 1988 (as Soviet Union) in the London 2012 Summer Olympic Games.

According to Kirilenko, winning the bronze medal in London and having Mikhail Prokhorov as a Russian owner in a large market (Brooklyn, New York) has brightened the future of basketball in Russia.

Kirilenko spoke highly of Prokhorov’s impact and how he will draw more positive attention to Russia’s basketball future.

“I think it’s a huge impact because for the scouts and the NBA right now, it’s a little different approach for the Russian players,” said Kirilenko. “I think it’s a great platform for the Russian young talent to get to the NBA because of (Prokhorov) and because the perception is a little bit different right now. The scouts probably look a little bit closer because they want to bring the Russian talent to make him play for (Prokhorov).”

Kirilenko confirmed that he spoke with Prokhorov briefly before the game, but in a casual manner.

“He asked, like, how is everything,” said Kirilenko. “I said everything is great obviously. I just said it’s a great arena because when we get to the arena it looks very flashy.”

The Barclays Center was nearly a new home for Kirilenko who was courted by Brooklyn Nets' management heavily before failing to come to terms on a deal.

Kirilenko stressed that he has moved on and is solely focused on his current team.

“I’m not talking about that (Nets negotiations), said Kirilenko with a smile. “I’m a Minnesota Timberwolf.”

After talks broke down with Brooklyn, Kirilenko received a two-year, $20 million offer from the Minnesota Timberwolves to return to the NBA.

Kirilenko discussed the difficulty of getting acclimated to the NBA game after spending a year overseas.

“The only adjustment probably is the schedule because in Russia we only play twice a week,” said Kirilenko. “Here you’re playing four, sometimes five times a week. It’s just the quantity of the games, but other than that it’s just less practices. In Europe and Moscow you have more practices and the schedule is a little different.”

Despite the scheduling adjustment and return to an 82-game NBA schedule, Kirilenko has enjoyed his time with Minnesota.

“I like everything,” said Kirilenko. “All the details are definitely how I expected and I’m really enjoying playing with coach Rick (Adelman). I think he’s a very good coach so far.”

With franchise centerpiece Kevin Love expected out of the lineup until the middle of November, or the start of December, Kirilenko is expected to see increased minutes at power forward.

At 6-foot-9 and 235 pounds, Kirilenko has enough bulk to fight for rebounds and the leaping ability to jump over opponents around the paint. Kirilenko is also an excellent help and on-the-ball defender known for blocking shots (2.03 per game career average).

For the Minnesota to remain competitive until Love returns, and without the services of human highlight reel Ricky Rubio, Kirilenko must carry the Timberwolves as he did with his Russian bronze medal teams.