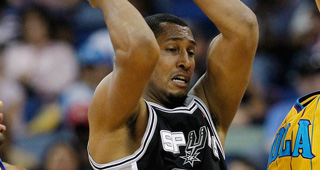 Once last season’s NBA Finals ended, Boris Diaw spent reasonable time deciding on the player option on his contract with the San Antonio Spurs. For Diaw, the choice had been made simple far beyond the amount of money on the deal.

With the Spurs, Diaw has close friends and France teammates Tony Parker and Nando de Colo, Gregg Popovich, a stable organization and, most importantly, another opportunity to make a championship run. The seven-game Finals defeat to the Miami Heat disappointed Diaw into the EuroBasket tournament – leading to the conclusion that exercising the option was a no-brainer.

“It was an easy decision coming back,” Diaw told RealGM. “In the Finals, we were so close. I wanted to go again and come back with this team. It’s been a great season this year, and we play a good style of basketball and we’ll get another shot together.”

Popovich watched Diaw, Parker and de Colo closely as the French national team won the gold medal in the summer, noticing an aggressive Diaw who searched out his own offense. Diaw put up 10.4 points a game in 10 tournament games, and he’s taken his assertiveness into this season averaging nearly 10 points.

After averaging just four points in the playoffs last season, Diaw believes that he’ll need to prove himself as a reliable offensive option – both by scoring and playmaking, two facets Diaw has exquisitely blended into his repertoire over 11 NBA seasons.

“Some games I need aggressiveness, and I have to be ready when the playoffs get here, to be able to be aggressive,” Diaw said. “My shots are game by game, trying to help and contribute.”

Given their conversations, Diaw anticipated exactly what Nash plans to do: Maintain rehabilitating from nerve irritation in hopes of continuing his career.

“Health will always be up and down, but Steve takes so much care of his body,” Diaw said. “He has a great work ethic. He’s always able to come back and perform.”