Why I Love The Nike Hoop Summit 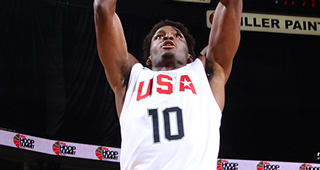 After seeing the confetti rain down on UConn on Monday, I wasn’t quite tired of that championship spirit.

On Friday, I watched a few minutes of the NCAA Men’s Team Gymnastic Final on the Big Ten Network. Michigan Senior Sam Mikulak, who you may remember from the 2012 London Olympics, had the title clinching floor routine for the Wolverines. And then his teammates tackled each other in jubilation.

Then on Saturday night, I snuck up to Philadelphia and saw the Frozen Four title game in person. Union College plastered Minnesota with 20 shots and four goals in the first period en route to a 7-4 Victory. And as I watched the post-game from the upper deck, I saw the contrast in emotion. One of the Gopher players knelt down with his elbow on his knee, knowing that his dream had come up just short. Meanwhile on the other end of the ice, the Union College players had thrown their gloves and sticks aside and had formed a huge dogpile. Whether you follow these teams from the opening practice, or only start watching in March and April, the scene when a team wins a championship never gets old.

And the spirit of competition never gets old. This is why the Nike Hoop Summit is the best of the high school All-Star games. OK, so it isn’t quite like seeing two teams battle for a national title. But something happens when those players put on the Team USA uniform. This isn’t just an all-star dunk contest. You get to see a little bit more of the player’s character. For example:

-In the 2011 Nike Hoop Summit, Anthony Davis and Michael Kidd-Gilchrist were star scorers, but we also learned that they had defensive intensity. Twelve months later Davis and MKG were national champions.

-In the 2012 Nike Hoop Summit, a very young Andrew Wiggins (playing for the World Team) loved the 24 second shot clock and dominated an up-and-down game. We learned that Wiggins was willing to take over when his team needed his scoring. At Kansas, Wiggins had his best games when Kansas was playing full-court basketball. And while Wiggins liked to defer to his teammates, when the Jayhawks were struggling, he tended to take over and have his best games.

- In the 2013 Nike Hoop Summit, the US gave up an embarrassing number of points in a blowout loss. We learned that as good as Jabari Parker and Julius Randle might be, last year’s freshmen class was not filled with elite defensive players. Perhaps not surprisingly, Duke was a bad defensive team all year, and Kentucky narrowly made the national title game, despite a string of poor defensive games leading up to it.

So what did the 2014 Nike Hoop Summit offer up as lessons?

Of course there are lots of small observations whenever you watch an all-star game.

- Seeing North Carolina recruit Theo Pinson attack in transition, and draw a foul, you couldn’t help but wonder whether Roy Williams is assembling the perfect group of players to take advantage of college basketball’s tighter whistles. I still wonder whether the Tar Heels have enough outside shooting, but with three true point guards on the perimeter, and a player like Pinson that can get to the rim, teams are going to find that if they have a slow-footed guard on the floor, they have nowhere to hide him against the Tar Heels.

But I thought there were three real lessons in the game:

1)     Duke might have a championship caliber defense next season.

Duke has so many elite offensive players, they shouldn’t have a problem scoring next year. The big question for is whether the freshmen can elevate the defense to a national championship level. Saturday wasn’t necessarily Jahlil Okafor’s best game, but his defense still stuck out. He had an early block on Kentucky recruit Karl Towns. Then later in the quarter, he switched on a screen, and was able to move his feet, and force SMU recruit Emmanuel Mudiay to commit a turnover.

Meanwhile, Paul Biancardi was raving about Justice Winslow. He not only said Winslow was the best defensive player in the country, but he pointed out multiple times when Winslow’s quick hands caused the key tip that led to a Team USA steal. And the beneficiary was usually fellow Duke recruit Tyus Jones. Jones somehow got his hands on five steals in the game.

Emmanuel Mudiay might be one of the most intriguing players in college basketball next year given his next-level size, and overall athleticism. Scouts are going to be picking his game apart to see whether he can truly become an NBA PG.

On one possession in the second half, Fran Fraschilla also perfectly called Mudiay out for ruining a 2-on-1 fastbreak. Instead of spacing the floor and making the pass, Mudiay drove into his teammate, ruined the spacing, and was lucky to get fouled.

But most importantly, and I don’t want to lose this given the introduction I wrote at the start, the US Olympic pipeline remains strong. This was a real game with real strategy. Canada thought the US didn’t have enough shooters, and played zone from the opening minute. 10 years ago, the US international pipeline might not have been ready for that. Saturday, the US counter-attacked by using full court pressure for long-periods of game time. Basketball 101 says that if you don’t have the shooters to attack a zone in the halfcourt, attack before the zone it gets set, and the US was prepared to do just that.

But this is also about Team USA valuing the diverse skill set. LeBron James has been the perfect face of USA Basketball. He was willing to play center in the Olympics, showing that he would do anything to help his team win. And that continues to rub off at all levels.

Stanley Johnson, an Arizona recruit, played some PG by necessity in high school, but he told Paul Biancardi and Fran Fraschilla that this was not his preference. But when the full-court pressure didn’t work in the first half, I thought Johnson’s ability to attack the zone by driving from the wing was absolutely crippling to the World Team’s defense.

Overall, by valuing versatile players, and building a strategy that takes advantage of the US athleticism, the US developmental system is in great shape. And while there weren’t any gold medals on the line, for the young men putting on a Team USA uniform, winning this game meant something.