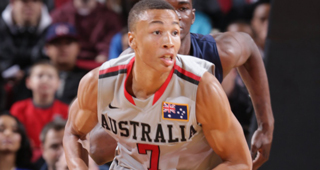 From an NBA draft perspective, the Nike Hoop Summit, which pits the best under-19 international players against the best US high school players, is the most intriguing of the high-school all-star games. It’s one of the only times the best teenagers from overseas play in North America before the draft - Tony Parker, Dirk Nowitzki and Enes Kanter were all “discovered” at the game. Every year, there’s at least 1-2 future lottery picks on the international squad.

Given the one-and-done rule, though, much of the intrigue comes a year in advance - the standout players at the 2014 Hoop Summit won’t be drafted until 2015. If you want to talk about the 2014 draft, you have to look at 2013 Hoop Summit. The film from last year’s game gives us a few clues about what should be one of the biggest storylines in this year’s draft - Andrew Wiggins and Dante Exum, the two World Team guards expected to go in the Top 5.

Neither fits the stereotype of the unathletic international player. Like Tony Parker, Wiggins and Exum are sons of Americans who played in the NBA before finishing their careers overseas. Mitchell Wiggins wound up in Canada and his son played high school ball in the US. Cecil Exum played in Australia and his son spent most of his teenage years at the Australian Institute of Sport, the academy that produced Andrew Bogut and Matthew Dellavedova.

Exum was not in a situation in Australia where he could get much publicity in NBA circles. Coming into the Hoop Summit, he was more of an unknown commodity than Wiggins, who was being hyped as the best prospect since LeBron. Exum was expected to play college basketball and not declare for the draft until 2015. That began to change after a strong performance in Portland, where he was every bit as good as his more celebrated teammate.

The game itself, a 112-98 victory for the World Team, wasn’t all that competitive. They got out to a big early lead by playing zone, which forced Team USA to beat them with a half-court offense instead of going 1-on-1. The Americans were able to get back in the game by speeding up the tempo with a full-court trap, but the international players eventually figured out the press, pulling away in the fourth quarter with a string of open dunks in transition.

As the NBA teams that drafted Saer Sene and Bismack Biyombo in the lottery found out, there’s only so much you can take away from an exhibition game between two groups of teenagers who practiced together for less than a week. Team USA, which had more slashers than shooters, didn’t have enough time to prepare for the zone and neither team was all that smooth in the half-court. The internationals had 24 assists on 19 turnovers; the Americans had 15 on 14.

Nevertheless, just from that game, you could see why people are so excited about the two guards. Wiggins (6’8 200 with a 7’0 wingspan) and Exum (6’6 190 with a 6’9 wingspan) both have an elite combination of size, speed and length. Exum may not be quite as explosive in the air, but he’s every bit as quick laterally. His first step is absurd - the American guards couldn’t stay in front of him. The difference in quickness between Exum and the Harrison Twins was glaring.

When you look at his production in the game, what jumps out is how efficient he was. Exum needed only eight shots to get 16 points. He didn’t get the ball that often, but when he did, he knew what to do with it. When the Americans eventually began playing off him, he knocked down the open jumper. He could take whatever the defense gave him without having to force the action. The best players can beat a defense in multiple ways - they make the game look easy.

Wiggins got 17 points at the Hoop Summit, but he needed 16 shots to do it. That was the big difference between the two - Exum played under more control and had a lot of finesse in his game. For the most part, Wiggins was putting his head down, running at the rim and throwing up shots. He was mostly scoring off being longer and more athletic than the guys he was facing - in the NBA, he will be playing guys who are just as long and just as athletic as he is.

Aggressiveness was one of the knocks on Wiggins in college, but that was more about his role in the offense than his mentality. Kansas runs a lot offense through the post - Wiggins didn’t get to play in transition nearly as much as he did in AAU ball. He’s an inconsistent shooter without great ball-handling ability, so it was hard for him to be as “aggressive” without open lanes to the rim. He got most of his points in the Hoop Summit in transition and the offensive glass.

A perimeter player with that skill-set is valuable, but they have a hard time making their teammates better. That’s where Exum has an edge on Wiggins - he’s a much better passer. A few months after the Hoop Summit, he carried a relatively untalented Australian team to the semis of the U19 world championships. Exum averaged four assists per game in Prague while Wiggins had only 1.5 a game at Kansas. That’s a big deal when evaluating wing players.

While Exum isn’t quite as long and athletic, he’s far more skilled. He’s an elite athlete in his own right and he plays with more poise than Wiggins, despite being six months younger. You have to play Trading Places with these guys - what would have happened if Exum was on the AAU circuit every summer and Wiggins was in the AIS? Forget which one has the better highlight tape and who is getting more publicity - passing up Exum to take Wiggins could be a mistake.