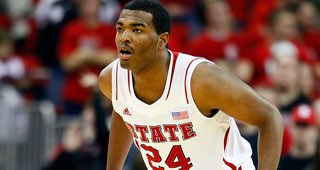 History was made on Thursday night when the Phoenix Suns selected T.J. Warren with the 14th overall pick. Warren, a 6-foot-8 forward out of N.C. State, is the first player drafted that worked directly with David West through his AAU Garner Road Basketball Club program.

Warren, who was invited by the NBA to sit in the green room, had the support of his mentor on the special night. West lends a hand, and ear, to players in the family program during the season while his older brother, Dwayne, runs the AAU club.

During the summer, West instills strong values -- in basketball and life -- in the youngsters enrolled in the program. If you go to the Garner Road website, the first thing you are greeted by is the motto: “No Books, No Ball.”

Warren declared for the draft after a sophomore season in which he was named the ACC Player of the Year and a Second Team Associated Press All-American. He has been lauded as having one of the most polished offensive games in a very deep draft class.

The Suns were one of the teams that worked Warren out and he felt as though he performed well in front of the team’s decision-makers. He couldn’t be sure where he’d go, but Phoenix was a logical landing spot.

“I felt like I had strong workouts. The Phoenix Suns were one of my best workouts,” Warren said after being drafted. “I did a lot of great things there, and it showed today. I’m very fortunate to be in this position.”

Warren has West to thank for helping him realize his dream. West has been a part of Warren’s life for nearly half of it.

“David has been a mentor to me since a very young age,” the 20-year-old said. “Since I was 10 years old, just learning from him, from his game. It means a lot to me.”

The importance of the moment wasn’t lost on West, who was drafted 18th overall by the New Orleans Hornets in 2003. Warren spent several summers away from his family and in the care of West’s as he worked towards his basketball goals.

“It’s a pretty special moment. We’ve had T.J. since he was 11, his parents trusted us with him,” West told RealGM on Thursday night. “They trusted us during the summer to stay on him. They gave us a lot of leeway with him in terms of pushing him. This is something he’s talked about since he was a little kid. Something he’s worked his butt off for; it’s great that it happen for him.”

Not only has Warren achieved his goal, but Phoenix’s system also suits his game extremely well. The Suns like to score and Warren can do that in bunches.

“Perfect,” he said of the match. “They’re an open, run-and-gun system. Very good offensively, one of the highest scoring teams in the league. He’s the best scorer in this draft, so he’s going to fit in perfectly with what they do.”

Warren was one of the first players West was able to take under his wing early on. The two have maintained a close relationship as Warren has grown up and West has moved through what is now an 11-year professional career.

“Everyday I’m there for him, even now,” West said. “I stay in his ear everyday, keeping his mind in the right direction in terms of making sure he remains focused. Early on with him, I was with the Hornets and we weren’t making the playoffs so I was with him from April all the way through to the end of September. We had three or four years like that and they paid off for him.

“Just his hard work, him being a basketball guy. He’s a basketball junkie. He doesn’t have a whole lot of things going on outside. He’s got his family, a very small circle. He’s going to make the transition well. This is something we’ve been talking about since he was a young, young kid.”

The Suns drafted Warren in large part because of his work on the court, but West believes that success will come at the next level because of how strong he is mentally. It’s not surprising given the tenacity the mentor as brought to floor since he was Warren’s age.

“He has it up here,” West said, pointing to his head. “He’s constantly grinding, pushing himself. He pushed himself all the way to this level.”

In many ways, Thursday night could be a stepping-stone for the AAU Garner Road Basketball Club, but the program’s guiding influence insists that he won’t use Warren as a promotional tool. Still, guiding a player from his pre-pubescent years through to high school, college and ultimately the NBA is bound to get the attention of young players and those around them.

“We don’t really look at it like that. We are basically looking at it as just the beginning. We are invested in terms of these young people,” West vowed. “That’s my passion. That’s just what we do, my brother, we ultimately want to guide these kids and give them whatever we can in terms of what we’ve learned. Basketball is just a tool; it’s just a vehicle to reach these young people. T.J. is one of those guys that bought in right away; he’s a listener. Once he gets comfortable and opens up, anything that I would tell him when he was younger he took it to heart because I was where he eventually wanted to be.”

Are there more T.J. Warrens in the Garner Road pipeline?