The Storylines Of The Basketball World Cup 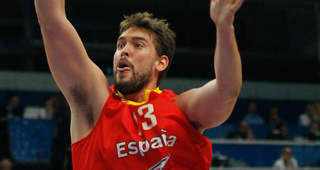 If you have been looking for a basketball fix in the dog days of summer, wait no longer. The FIBA World Championships are finally here. Even though this is ‘Murica, this tournament allows hoop heads to take note of the global influence of the game because, as it turns out other countries play and love the sport as much as we do. When they’re not playing soccer, of course.

Every national program involved enters this tournament with the goal of trying to make their country proud. For some countries, that means toppling the mighty U.S.A. For others, it’s one last shot at glory. And a few programs lurking in the shadows are hoping to use this platform to announce themselves as the world’s newest global power. So before this whirlwind event kicks into gear, let’s take a look at the most pressing storylines.

First and foremost, can anyone push the US to the brink before the Semifinals?

Short answer, no. If you’re a fan of blowouts, then Team USA’s draw in the bottom half of the bracket are going to make all your dreams come true. Their opponents in Group C should offer very little resistance. Finland has a few fringe NBA talents in current Cavalier, Erik Murphy and former second round pick Petteri Koponen (currently plying his trade in Russia), but their extremely slim chances of testing the U.S. went to none the minute NBA vet Drew Gooden couldn’t get dual citizenship. The Dominican Republic, New Zealand and Ukraine all lack to pose a serious threat to Team USA, even on an off night.

That leaves just Turkey. NBA defensive stalwart, Omir Asik, who will be joined in the frontcourt by talented European-based bigs, Ogus Savas (a beast on the glass) and Emir Preldzic provide the Turkish team with a capable front line. Up front, Turkey should be able to compete with the US despite not having NBA veterans Ersan Ilyasova and Enes Kanter. But the fact that Turkish League veteran Sinan Gular is their only capable ballhandler (for this level), makes it extremely unlikely this game comes down to the wire.

In the first two knockout rounds, Team USA is likely to draw (at worst) Mexico, Slovenia and Lithuania. As we saw in their exhibition opener, Phoenix’s Goran Dragic (and his brother, Zoran!) will have trouble making it a game, as we saw in the most recent exhibition matchup. Lithuania has an NBA frontline of Toronto’s Jonas Valanciunas and Houston’s Donatas Motiejunas and a strong record in international play. But team captain and starting point guard Mantas Kalnietes dislocated his collarbone and will miss the tournament. Losing such an integral player likely means it will be another lopsided affair for Team USA should the two sides meet. On the bright side, lots of Anthony Davis lobs should be fun for the whole family.

An ugly send off to a Golden Generation?

On the opposite side of the bracket, it seems like it will be a long, painful farewell to one of the most incredible basketball generations we’ve ever seen. Argentina has become a staple of international basketball over the past dozen years but their run of relevance may soon come to a disappointing end. Three members of the old guard, Manu Ginobili, Fabricio Oberto and Carlos Delfino are either retired (Oberto) or out injured. The team’s bell cow in recent years, Luis Scola, is 34. Savvy veteran point guard Pablo Prigioni is 37. Rugged forward Andres Nocioni will turn 35 this fall and is playing out his career in Spain. It’s truly the last gasp for a country that has beaten the US twice and medaled in multiple international tournaments, including taking home the gold in the 2004 Olympics, during an amazing decade plus.

With the only young talent on the roster being 23-year-old point guard Facundo Campazzo, it’s very possible that this squad could barely end up qualifying in a group containing three quality opponents in Greece, Croatia and Puerto Rico. Getting anywhere in the knockout rounds with Brazil and Spain lurking makes it likely that Argentina’s tournament run ends early. But given the competitive spirit that has embodied this program since the burst onto the international scene, they may will their way to one last inspiring run.

Does France pose a real threat without Tony Parker and Nando De Colo?

With Parker in the fold, France would have been one of the favorites in the tournament and presented Team USA with a real challenge in a possible final. Unfortunately for France, Parker is out and so is his understudy, Nando de Colo, due to a broken hand. Left in their stead are virtual unknowns Thomas Heurtel (playing for a mid-tier Spanish team) and Antoine Diot (plying his trade in France’s domestic league). Those two have reportedly looked shaky in exhibitions (though France did smack Australia 73-50 in their last warm up game) and it’s likely that France will be forced to rely on NBA veterans Nicolas Batum, Evan Fournier and Boris Diaw to handle the ball and create in the half court. As we saw in the NBA Finals, Diaw can do things with the ball in his hands most 6’9” people can’t and Batum is equally as capable. Yet asking one (or all) of those three to shoulder the burden of running an offense for multiple games in the tournament seems like a recipe for failure. France will still be a tough out, but the injuries to de Colo and Parker have likely ended any hope of a gold medal.

Which country is primed to take the next step?

Australia suffered a major blow when Spurs scoring machine Patty Mills suffered a serious shoulder injury. Without Mills, it seemed like the Boomers were destined to just another respectable, yet uninspiring finish. But in the absence of Mills, sharp-shooting Ryan Broekhoff has emerged to shoulder some of the burden.

If Broekhoff’s name caused you to mutter “who?”, don’t feel bad. Only the dedicated hoops junkies may remember when his solid career at Valparaiso University had him (briefly) on the radar as a potential second round draft pick last summer. Broekhoff’s solid play in warm-up games has cemented a spot in the starting lineup next to precocious pick-and-roll maestro Matthew Dellavedova (Cavaliers), small forward Joe Ingles (a member of Euroleague champion, Maccabi Tel Aviv), former NBA journeyman David Anderson and Spurs big man Aron Baynes. That group will be supported by a bench of guards Chris Goulding (scoring machine in the Australian league), Brad Newley (veteran of both the Australian and high-level European leagues), Dante Exum (Utah Jazz lottery pick), along with big men Cameron Bairstow (Bulls second round pick) and Brock Motum (recently signed by the Jazz). Not a single member of this team is a big time talent (yet, in Exum’s case), but it’s a tough, productive group that should be the favorite to win Group D. Doing so would all but guarantee a potential match up with Team USA in the semi-finals. If Australia pushes the U.S. to the limit in that game it will officially announce their presence as a force to be reckoned with in international basketball.

Can Spain win it all?

For the most part, the prevailing wisdom seems to be that this tournament is destined for a redux of the 2012 Olympics. Only a major upset should stop Team USA from reaching the final, but the Spanish squad will have their work cut out for them. Despite being the hosts, Spain will have to navigate a group containing France and a very tough Brazil team featuring the likes of Nene (Wizards), Anderson Varejao (Cavs), Tiago Splitter (Spurs), Leandro Barbosa (Warriors) and the Steve Nash of Europe, Marcelinho Huertas. In the knockout stages, Argentina, Greece and Croatia (a country that, like Australia, could make a name for itself in this tournament) all have varying chances of scoring an upset. The road to even meet the U.S. in the Finals is going to be a challenging one at the very least.

Should Spain make it through safely, it should set up an epic rematch of the gold medal game two years ago. With Serge Ibaka, Marc and Pau Gasol all participating in the tournament, the U.S. has been (rightfully) concerned with matching Span’s size. But it’s really the guard play that will ultimately decide this potential matchup. Because of Team USA’s aggressive style of defense, the playmaking and shooting of NBA veterans Jose Calderon and Ricky Rubio along with former NBA players Juan Carlos Navarro and Rudy Fernandez will be vital (keep an eye on Spanish pro Sergio Llull too). If those four players can avoid turnovers and knock down open shots -- along with steady support from their more heralded big men -- a win against of the U.S. is a real possibility.

But no matter how it ends, Spain’s journey will likely be the most exciting subplot of the entire tournament.