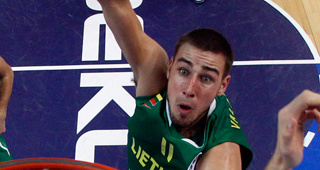 Through the first six games of the World Cup, no player has been more valuable to his team than Jonas Valanciunas, Lithuania’s 22-year old center. After riding the bench in the 2012 Olympics and serving as a role player at Eurobasket last summer, Valanciunas has moved into a featured role in this year’s tournament. He is the backbone of Lithuania’s game-plan on both sides of the ball, averaging 13 points, 8 rebounds and 1 block a game on 77% (!) shooting.

Despite losing star PG Mantas Kalnietis to a collarbone injury before the start of the World Cup, Lithuania has played extremely well in Spain. They went 4-1 in group play, knocking off Slovenia and losing to Australia, and beat New Zealand 76-71 in the round of 16. If they can get past Turkey on Tuesday, they would face the US in the semifinals and they appear to be the only team on that side of the bracket with a chance to give the Americans a game.

That’s almost entirely due to the presence of Valanciunas, one of only two NBA players, along with Donatas Motiejunas of the Houston Rockets, on their team. He almost single-handedly carried them to victory over New Zealand - not only could the Tall Blacks not match up with him in the post, they could barely even box him out. Valanciunas towered over their undermanned frontline, finishing the game with 22 points and 13 rebounds on 8-11 shooting.

At 7’0 245 with a 7’4 wingspan, Valanciunas is one of the biggest players in the NBA and he appears to have gotten even bigger in the offseason. Like many big men in their early 20’s, he is still filling out his frame and growing into his body. While he’s not an elite athlete, Valanciunas moves well for a player his size, which allows him to be an effective player on both ends of the floor. He is the rare center who can impact the game on offense and defense.

The offensive side of the ball is where Valanciunas has shown the most improvement at the World Cup, where he is getting the chance to be a featured player. Instead of using him primarily in the pick-and-roll game, Lithuania is making a concerted effort to pound the ball into him in the post. He has the size and strength to establish deep post position, the length to score over the top of defenders and the touch to get the ball softly on the rim.

Valanciunas is still far from a finished product with his back to the basket, but he is steadily improving that aspect of his game, to the point where opposing teams almost have to double him. The result is that he opens up the floor for the rest of Lithuania’s players, almost all of whom can knock down the three-point shot. With Motiejunas spreading the floor from the power forward position, they are a tough match-up for just about any team in the tournament.

Even the Americans, who gave up 25 points and 8 rebounds to Mexico’s Gustavo Ayon in the round of 16, will have their hands full with Valanciunas. That is why Lithuania’s quarterfinal game with Turkey will be so intriguing, as they have one of the only big men in the World Cup (Omer Asik) with the size to bang with Valanciunas in the paint. Asik, one of the best post defenders in the NBA, will be a good test to see how far his individual offense has come.

What makes Valanciunas so interesting, though, is that he provides value on defense as well. Most guys with his ability to score in the paint can’t match his ability to protect the rim or vice versa. Asik is the perfect example - for as good as he is on defense, he’s a non-entity on offense. Valanciunas, on the other hand, can give the Lithuania 20+ points while also serving as the backbone of their defense. He makes everyone better on both sides of the ball.

Lithuania doesn’t have a ton of athleticism on the perimeter, but their guards can extend out on defense and jump passing lanes because they know have a mobile Goliath behind them. Valanciunas doesn’t have monstrous block numbers, but he doesn’t need too to have an impact on the game. Just by moving his feet, waving his arms and standing at the front of the rim, he makes life much harder for any offensive player who gets into the lane.

In essence, having Valanciunas on your team means you have will a good defense and a good offense, which automatically makes you a dangerous team, at any level of basketball. Few players can have a bigger impact on a game than a two-way center, which is why they have always been one of the most coveted players in the sport. Without Kalnietis, Lithuania doesn’t have much perimeter talent, but Valanciunas’ presence means they can punch above their weight.

You can count the number of centers in the NBA with more two-way ability than Valanciunas on one hand - Dwight Howard, Marc Gasol, Joakim Noah, Tim Duncan. The scary part is that he’s only scratched the surface of his potential. He’s still only 22 years old - he should be a senior in college. Not only does he still have room to improve as a post scorer and an interior defender, he’s shown flashes of a perimeter jumper and a passing game in Spain.

He hasn’t gotten much press because he’s been confined to a smaller role with the Toronto Raptors, with usage ratings of 16.9 and 18.5 in his first two seasons in the NBA. They won’t turn their offense over to him overnight like Lithuania has done, but you can expect that they will continue to gradually expand his role over the next few years. The Raptors will be counting on internal improvement and featuring Valanciunas is one easy way to do that.

The reason that big men tend to develop slower than guards is that they are pressed into service at a much earlier age. A perimeter player as raw as Valanciunas would not have broken into the NBA as a starter at the age of 20. However, because there are so few human beings in the world with his combination of size, skill and athleticism, he was forced to learn on the job. He didn’t go to high school or play AAU basketball - he was a pro at the age of 15.

Valanciunas won’t reach his ceiling as a player until 2020, when he is in his late 20’s. Until then, he should steadily improve every season on both sides of the ball, much as he has done over the last three years, since he made his debut on the international stage. He is a franchise player in every sense of the word, both for his NBA and national team. As long as they have Valanciunas, both Lithuania and the Toronto Raptors will be teams to reckon with.