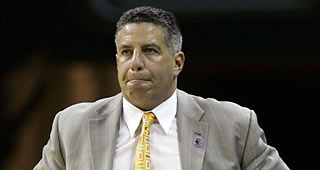 Oregon St. is among the biggest surprises in college basketball so far. The Beavers are 5-2 in the Pac-12 and 14-5 overall. In the preseason, the Beavers appeared to have a hideously under-manned squad. And the truth is, this still is an under-manned squad. Offensively, the team ranks just 177th in the nation. Other than Gary Payton Jr., Oregon St.’s players haven’t really developed into efficient stars. The entire reason that Oregon St. is winning is that Wayne Tinkle has convinced his team that in order to win, they have to play elite defense. And the turnaround has been amazing. Oregon St.’s defense has jumped from 215th to 15th in the nation.

And that refrain is common for new head coaches. They can’t necessarily overhaul the whole roster in year one, but they can at least get their players to compete on the defensive end. Auburn is another great example. Bruce Pearl did his best to find the best available JUCOs and immediately eligible transfers, but unfortunately many of them have not panned out offensively. But even if Pearl can’t will his players to make open shots, he can at least get them to work hard at getting stops. And Auburn has made progress defensively this year. That’s what good coaches do.

Often times we say it is too early to judge coaches in year one, and perhaps in the case of a team like Marquette, which has just one player over 6’7” on the roster, that’s fair. But for most first year coaches, judging the defense is at least somewhat fair game. Ernie Kent was fired at Oregon, in no small part because he was such a terrible defensive coach. And the time away from the game hasn’t really improved his approach. Washington St.’s defense has fallen to 283rd in the nation.

Kelvin Sampson also deserves a little scrutiny at this point. Yes, Houston lost its best two players to transfer this offseason. So we can excuse the team’s drop-off on offense to some degree. But the reason James Dickey was asked to leave was because Dickey’s teams could never stop anyone. Under Dickey, Houston never ranked better than 233rd nationally in defense. Sampson was a good defensive coach at Oklahoma and Indiana, and he was hired because he had the pedigree to change the defensive culture at Houston. And despite the roster turnover, the team still hasn’t bought in.

Houston sits at 0-8 in conference games in large part because they have the worst 2 PT FG% defense and worst defensive rebounding in American conference games. You can’t even argue that Houston is without talent. They have a handful of Top 100 players, particularly in the post, where Danrad Knowles and Devonta Pollard were once highly ranked recruits. There is no reason the current roster shouldn’t be a little more competitive occasionally.

UCLA’s Tony Parker didn’t make the trip to Oregon this weekend, leaving the Bruins with just 7 players. Right now UCLA simply has no alternatives when their players aren’t performing. Isaac Hamilton has gone 2-for-24 in his last three games, and Steve Alford can’t afford to put him on the bench.

Syracuse has a few more players available, but Jim Boeheim doesn’t have the confidence to play them. In Saturday’s loss to Miami, Syracuse played only six players, and four of those players played 40 minutes. Only freshman PG Kaleb Joseph was subbed out for Ron Patterson.

Minnesota’s Andre Hollins shot 20% in his first five Big Ten games, but has followed that up by scoring 31, 21, and 28 points.

It has been clear all year that Florida’s Kasey Hill has no confidence in his jump shot. So of course he got the ball, down 1 point at Ole Miss with 3.5 seconds left. Hill dribbled down the court, and kept dribbling until time expired, instead of taking a jump shot for the game-winner.

Speaking of Ole Miss, guard Snoop White continues to be a huge surprise to me this year.  His career ORtg’s were 90, 95, and 95. And when the team added a bunch of transfers this off-season, I thought his playing time would decrease. But White has raised his ORtg to 105 this season. And he had his most efficient game of the season on Saturday with 13 points on 5 shots. His three point shooting is much improved this year (as we saw in the Kentucky game), and the senior has finally figured out how to be an effective player in his last season in the SEC.

Every weekend tends to feature a window of close games that all come down to the wire one after another. On Saturday it happened in the 2pm window. First you had the main event slugfest between Kansas and Texas. Kansas’ Brannen Greene hit a huge three late in sealing the victory. I’m amazed how little playing time Greene has received. He’s a Top 40 recruit, he isn’t a reluctant shooter (18.5% of the shots when on the floor), and he’s been super-efficient making 48% of his threes this year. If outside shooting has been Kansas’ Achilles heel in the past, with Frank Mason and Greene on the floor, that isn’t the case this year.

With Kansas putting that game away, it only made sense to flip to the Arkansas at Missouri game. Missouri’s Wes Clark went to the line with his team down just one point and barely any time on the clock. It was basketball drama at its best. If Clark made both free throws, Missouri would pull the upset. If he made one of two, the game would head to OT. If he missed both, his team would lose. Clark missed both.

Then it was off to West Virginia, where TCU was looking for the team’s first road win against a ranked team since the 1990’s. This game is still available on WatchESPN, and if you haven’t seen the end of regulation and overtime, you might be better off avoiding my recap and just watching the action. The ending was off the charts.

First, TCU’s Trey Ziegler hit a ridiculous spinning jumper in the lane to give TCU a late lead. Then WVU’s Daxter Miles answered with a jumper to tie the game. Then TCU had only 1 second left, but tried to run a baseball pass along the sideline. The TCU player was seemingly checked out of bounds going for the ball, but there was no whistle. So West Virginia got to inbound under their own basket with 1 second left and a chance for the win. Again, there seemed to be a bit of a mugging, but no foul, and the game went to OT.

Then in OT West Virginia was down two when WVU’s Daxter Miles made a three to give his team the one point lead. TCU pushed the ball down the court and Ziegler again had the answer to give TCU the lead back with just 3 seconds left. But WVU didn’t hang their heads. Instead, Jevon Carter snuck behind the defense, caught a home run pass, and was fouled as time seemingly expired. Replays confirmed he was hacked on the arm with time on the clock, which left us with the same situation as the Missouri game. This time Carter made both free throws, and the home team won.

Meanwhile, the game was winding down in Milwaukee, as Georgetown led Marquette by two. Matt Carlino who had started the game with four threes and who had absolutely been on fire all day, had the ball and appeared to nail a three with 1 second left. Carlino seemingly gave Marquette the dramatic last second win. But the ref said Carlino’s foot was on the line, the shot was a two, and replay could not overturn the conclusion. The game went into OT where the Hoyas finally pulled away. Only with college basketball’s plethora of games do you so often get back-to-back-to-back dramatic endings in a row.

-Angel Delgado is putting up stellar numbers when you consider his dominance on the glass. Seton Hall is in a bit of a slump, losing 3 in a row, but don’t blame Delgado for the team’s struggles.

-Florida’s Chris Chiozza is disturbingly passive offensively, for an elite recruit, but he does have 30 steals.

A lot of these players are frankly going to be considered disappointing, but a lot of this comes down to playing time. Arizona’s Parker Jackson-Cartwright just doesn’t need to play a lot with TJ McConnell playing so well. Miami’s Ja’Quan Newton is one of those players who I certainly thought might earn playing time, but he hasn’t. Behind two star transfers, behind Manu Lecomte who emerged early in the season and Davon Reed who returned earlier than expected from an off-season injury, Newton has been forced to compete with fellow freshmen James Palmer and Deandre Burnett for playing time. And more often than not, he’s been losing.

But the interesting thing to me is that even if the numbers don’t jump off the page for some of these players, many of them have had a dominant game recently. You hope with a freshman at this level, that they at least give you a sign that they might be able to dominate in future years. For Miami’s Ja’Quan Newton, the great game was just over a week ago, when he had 16 points and 5 assists against Notre Dame. For NC State’s Abdul Abu-Malik, the 19 point, 5 rebound effort at Miami this week was very impressive. For Illinois’ Leron Black, the 15 point, 13 rebound effort against Purdue was reason to be excited. And San Diego St.’s Malik Pope had 22 points, including a 4 of 4 line from three point range in San Diego St.’s weekend loss to Colorado St.

#55 BYU’s TJ Haws is on a Mormon mission. #60 Gonzaga’s Josh Perkins has missed most of the season after breaking his jaw.

This list is mostly players in the 2014 RSCI Top 100, but I included two players who were ranked in the 41-60 range in the 2013 RSCI Top 100, but who had to redshirt last year, Xavier Rathan-Mayes and Duane Wilson. Both redshirt freshmen had huge weekends. Rathan-Mayes almost single-handedly willed Florida St. to a win at North Carolina, scoring 35 points on 26 shots. Meanwhile Marquette’s Duane Wilson had 26 points, and made 6 of 8 threes in Marquette’s OT loss. Sitting out a year might not have been these players first choice, but both have debuted with more polish than they might have a year ago.

Elbert Robinson and Michael Humphrey really haven’t shown much, and that is a little disturbing. With Reid Travis out, Humphrey hasn’t been able to earn significant playing time. And LSU is not a deep team, so Robinson’s lack of minutes reflects the fact that he isn’t ready for the college game.