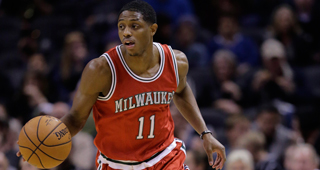 In the most surprising deal completed before Thursday afternoon’s trade deadline, the Milwaukee Bucks, Phoenix Suns and Philadelphia 76ers agreed to swap five players and a first round draft pick.

The Bucks will receive Michael Carter-Williams, Tyler Ennis and Miles Plumlee, the Suns get Brandon Knight and Kendall Marshall and the 76ers add a first round pick from Phoenix (via the Los Angeles Lakers).

The draft pick is top-five protected in 2015 -- the Lakers enter the second half of the season with the best chance at landing the fourth overall pick -- but only top-three protected in 2016 and 2017, and unprotected entirely in 2018.

Carter-Williams, 23, was the 11th overall pick in 2013 and is the NBA’s reigning Rookie of the Year (in a questionable draft class). For most teams, he'd have figured to be a significant part of the future, but Sam Hinkie seemed prepared to deal him dating back to last year's draft.

If nothing else, the 76ers are consistent. It’s now clear that Hinkie is even more patient than we imagined. If the window to begin winning games was next season, you can now push that back to 2016-17.

Perhaps Philadelphia didn’t like what they saw in Carter-Williams, but the fear has to be that he develops into the type of point guard they eventually need around Joel Embiid and Nerlens Noel -- assuming both are still on the roster when they finish constructing Hinkie’s vision.

The trade makes perfect sense if the 76ers are confident in their ability to scout and evaluate draft talent. The pick they receive in this deal should be higher than the selection that was used to draft Carter-Williams.

Knight, who was enjoying a career-best season with Milwaukee, will be a restricted free agent this coming summer. I wrote just a few weeks ago that Knight deserved All-Star consideration and his numbers suggest that while he didn’t make the Eastern squad, he’s going to get paid very well in free agency.

The trio of Eric Bledsoe, Dragic and Thomas didn’t work out, but the deals they swung will allow them to test out a Bledsoe-Knight combination and decide if they want to make that a long-term backcourt.

Knight, who is shooting 40.9% from three, should fit nicely in Phoenix as the off-guard. Jeff Hornacek will have the option of using Bledsoe and Knight interchangeably. Not anointing an unquestioned point guard may seem like a mistake in the wake of the disaster that was the Point Guardians of the Galaxy era, but the ball is much easier to share between two players than three.

It’s difficult to grade the Suns simply on this deal. While it was technically a separate one from the Thomas trade with the Celtics, it’s unlikely they make one deal without the other.

Adding Knight also gives the Suns a better defensive option in the backcourt than either Dragic or Thomas, who is always at a height disadvantage. Phoenix ranks 19th in defensive efficiency (107 points per 100 possessions).

The Suns will waive Marshall, who was injured in Milwaukee’s game against the New York Knicks in London last month.

Milwaukee is the only one of these three clubs firmly in the playoff picture and while they will undergo a period of adjustment, they can make this move with an eye on the long-term and maintain the same level of play they established through the first 50-plus games of the season.

Carter-Williams is long and athletic, fitting in perfectly with the type of team John Hammond and David Morway have put together. He’s also more of a pass-first point guard than Knight, a combo guard more than anything else.

Knight was a border-line All-Star and very important to Milwaukee’s turnaround, but his on/off numbers this season weren’t favorable. His net rating per 100 possessions with the Bucks was a startling -8.7 in nearly 1,700 minutes.

Carter-Williams isn’t nowhere near the shooter Knigh tis, but he operates the pick-and-roll much better and his all-around passing skills will be welcomed by his teammates. The Bucks have a defensive identity, but will move the basketball under Jason Kidd, who is a perfect mentor for MCW.

Kidd was a passing point guard with a suspect shot when he came into the league, but was able to develop a jumper as his career progressed. I’m not saying Kidd is a shooting savant, but if anyone can mold Carter-Williams into an All-Star-caliber point guard it’s him.

A new point guard isn’t all the Bucks received -- multiple teams coveted Ennis at the deadline and Plumlee can help protect the rim in the absence of Larry Sanders.

Whether or not the Bucks were looking to move Knight, you can imagine adding three recent first-round picks is something most teams would find advantageous. Knight was beloved within the organization, but with his uncertain future and the type of contracts they acquired the Bucks are in better position to put special something together over an extended period of time.

The core of Giannis Antetokounmpo (20), Khris Middleton (23), Jabari Parker (19) and John Henson (24) is extremely young and they feel rookies Damien Inglis (19) and Johnny O’Bryant (21) could become rotation players as well.

The Bucks were likely going to be the underdog in a first-round series with Knight, so it makes sense to swap him out for a point guard with perhaps a high ceiling and longer contract.

Grade for Bucks: A

Milwaukee has $15 million in cap space this summer and will have a roster comprised solely on rookies or expiring contracts with which to play. That is a tremendous amount of flexibility for team that is already winning.