Most Improved Euroleague Players For 14-15 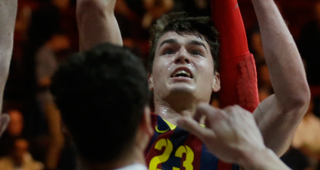 While Euroleague is on a short break as its teams are fighting for the national cups, we present our Top 10 Euroleague's Most Improved Players Ranking. With the season halfway over, RealGM ranked players who have taken the next step in their Euroleague careers and contribute more in 2014-15 season than they have been in recent years.

Arturas Milaknis, who was a sub of Vytenis Lipkevicius last season, now leads in Europe in total three-point shots made with 115. Milaknis is one of the biggest threats from beyond the arc this season as he made at least one three-pointer in every one of his last ten Euroleague games and ranks third in three-point makes in Top 16. The 28-year-old might get invited to the Lithuanian national team training camp, but his lack of versatility will likely stop him from making the final roster, as head coach Jonas Kazlauskas prefers players with a wider skill set.

Panathinaikos' new head coach Dusko Ivanovic turned Vlantimir Giankovits from 12th man into a starting five player. In a short period of time Giankovits' minutes increased from four per game in 2013-14 to 27 this season, which is just a little bit less than Panathinaikos symbol’s, Dimitris Diamantidis’ playing time. Three-point shooting has been a real issue for Giankovits in the regular season, where he made only 19 percent of the shots from beyond the arc. However, that has been significantly improved in the second stage as he makes 43 percent of his three-point attempts in the Top 16.

First of all, Andrey Vorontsevich had a statistically similar season before when he averaged 10.5 points and 4.3 rebounds and had an important role under coach Dusko Vujosevic in 2010-11. The difference is that four years ago CSKA won only three games in the regular season and did not make out of the group, while now Vorontsevich was a starting power forward role for a main championship contender. After averaging 4.6 points last season, Vorontsevich started in all of 17 games this year and scored in double digits in 11 of them.

With their two most important backcourt players gone (Tyrese Rice and Ricky Hickman), Devin Smith successfully stepped up and turned himself into a star player in his fourth season with Maccabi Tel Aviv. Smith is currently one of three players in the league on both the top ten scorers and rebounders lists. The 31-year-old forward was also unstoppable in the Israel Cup final game last weekend, where he scored 27 points, grabbed seven boards and helped Maccabi Tel Aviv win its sixth straight cup.

Since winning the Euroleague MVP award in 2009-10 and moving to CSKA a year later, it took three years of waiting until Teodosic began meeting expectations. In his first three seasons in Moscow combined, Teodosic never averaged more than 12.7 points, 5.0 assists and 2.8 rebounds per game. However, this year, after a successful performance in the 2014 FIBA World Cup, Teodosic surpassed his averages in previous three seasons with CSKA by demonstrating MVP worthy leadership and consistency. Teodosic scored no fewer than 11 points and dished out at least four assists in each of his 12 Euroleague games played this season.

7-foot-5 center Boban Marjanovic makes Euroleague’s most improved players ranking for the second consecutive year as the big man transformed himself from an unskilled and uncoordinated center to an MVP candidate. So far Marjanovic has also been the most dominant player inside the paint as he successfully uses his size and leads the league in rebounds (9.9). The leader of Crvena Zvezda, who had three double-doubles last season, already has ten (!) double-doubles under his belt this year in 17 games played.

21-year-old Luka Mitrovic, who is projected as a late second-round pick in 2015 NBA Draft, has been much more successful using his versatility this year, which led to becoming an important part of a Euroleague Top 16 team. Mitrovic’s average of shots taken per game rose from 3.1 in 2013-14 to 8.3 this year and his scoring average almost tripled. The Serbian forward, who has not scored more than eight points in a single game last year, made his name known in the Euroleague in regular season’s week 6. Mitrovic was scoring inside the paint, making four out of eight three pointers, perfect from the free throw line (8/8) and finished the game against Galatasaray Istanbul with career-high 30 points in 33 minutes of play.

After two successful professional debut seasons with Maccabi Haifa, former Virginia star Sylven Landesberg needed sometime to adjust to Maccabi Tel Aviv, the top level of European basketball and also gain trust from the coaching staff. The 24-year-old guard averaged only eight minutes per game last season and former Maccabi head coach David Blatt did not give any playing time to Landesberg in the Euroleague Final Four. This year it is a different story as Landesberg is one of the best sixth men in the league, providing 9.4 points and 2.8 rebounds per game off the bench.

It seems that so far Mario Hezonja’s career is stably going up. FC Barcelona let Hezona taste Euroleague basketball last season by occasionally giving him a few minutes of playing time and now helped him take the next step in his career by providing a more important role. Hezonja, who just turned 20, scored in double figures in seven games this season already, including a 22-point performance and five three-pointers against FC Barcelona's biggest rival Real Madrid. Until now, Hezonja has been successfully raising his draft stock - most NBA scouts see him as a Top 6 pick in the upcoming 2015 NBA Draft.

Taylor Rochestie has become a true Euroleague star whose performance this season might make it into the Euroleague history books. Comparing his last season with Montepaschi Siena, Rochestie more than tripled his scoring and assists averages, while his team has been one of the biggest surprises in 2014-15 season. Moreover, Rochestie could be called a Euroleague version of Kyle Korver as he might become a first player in Euroleague history to finish the season with 50-50-90 shooting percentages. Rochestie currently makes 52 percent of his shots from close distance (2PT), 51 from beyond the arc and 93 from the free throw line.