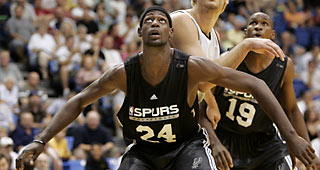 Panathinaikos Athens underwent many changes last offseason, which included adding seven new players and hiring two-time Euroleague champion coach Dusko Ivanovic. Former Maryland star James Gist, who was one of very few players that stayed in Athens for the third consecutive season, believes that Panathinaikos, with the given circumstances, has done a good job - the Greens rank four in group E and is on the way to qualify for the playoffs.

Panathinaikos has won five out ten games in the Top 16 and with four matches left to play, is one win ahead of ALBA Berlin and Zalgiris Kaunas. Gist and his teammates will face Real Madrid and ALBA at home, while Panathinaikos will also have to travel to Turkey and Serbia to play against Galatasaray Istanbul and Crvena Zvezda Belgrade.

RealGM sat down with 28-year-old Gist to talk about the current season, Ivanovic, Dimitris Diamantidis, what it was like to get traded to Athens and more.

RealGM: How would you evaluate the season so far?

RealGM: What is it like to play under one of the most famous European coaches Dusko Ivanovic?

Gist: It is tough, he demands a lot and he expects a lot from his players. But at the same time, playing for a coach that wants his players to fight, play with energy, that is kind of my style. I think me and him, we have kind of same mentality, him from the coaching standpoint and me from a player’s standpoint. To bring that energy, to fight, to come out there. And even if you do not have a good game, just being able to play and give 100 percent on the court. When you walk off the court, you should feel like you gave everything. Like you have nothing left to give. That is one thing I respect about him.

RealGM: It seemed that when playing against elite Euroleague teams, Panathinaikos was usually one step short from beating them. In your opinion, what is this team missing to get to the next level?

Gist: It's details. In games like that, it’s details. You are not going to win by 30 points every game. This is Euroleague and especially as the year goes on, the games get tougher. You have to be able to make the right plays at the right time. That comes with experience, we have a lot of young guys on our team this year. At the same time, it’s details because in games like that one or two possessions make the difference. We lost to Maccabi by three, FC Barcelona by four and these were detailed games and detailed losses. Those are things that you get better as the year goes on but there is not that much time left to say ‘the year is going on’. It has to be now; it has to be the next couple of weeks. And it has to happen.

RealGM: Talking about other Euroleague teams, who has made the biggest impression?

Gist: ALBA Berlin. I would say ALBA Berlin because they have been a surprise in year’s Euroleague. But at the same time they play with a lot of passion, power and energy. Even though their talent level is not as high as Real Madrid’s, FC Barcelona’s or CSKA’s, they compete at every game they play. That is one big thing that I like in Berlin.

RealGM: You are also playing alongside Euroleague star Dimitris Diamantidis. Is he still a dominant vocal leader on a team and what is like to be his teammate?

Gist: He is definitely a vocal leader. He is a legend and you do not get many chances to play with or be on a court with his caliber players. He is somebody that makes the game a lot easier. He finds teammates; he is a threat on the court. He is very unselfish and it is very difficult to find that caliber player with this unselfish mentality.

RealGM: You have also been a part of a very rare case in European basketball, being traded for another player, Andy Panko back in 2012.

Gist: I think that was the first trade in Europe and I was not ready, I did not expect anything like that. For me, it was difficult because my season in Malaga, I was seen as a player who could have helped the team to win. I never been a part of anything like that and I was always a player who helps team win. To bounce back from that and come to a club like Panathinaikos to try to make a career here, it has been amazing.

RealGM: You have witnessed and took part in likely two biggest rivalry games in European basketball, your former team Partizan Belgrade against Crvena Zvezda and now your current club Panathinaikos versus Olympiakos Piraeus. Could you compare them?

Gist: I have never seen anything like Panathinaikos-Olympiakos rivalry. When it comes to basketball, the Greek rivalry beats the Serbian one. In soccer, maybe not, but in basketball - for sure.