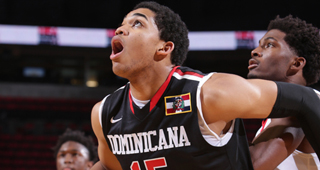 When it came to size and speed, Notre Dame didn’t have much of a chance of matching up with Kentucky in their Elite Eight game on Saturday. John Calipari’s team played two 7’0 for almost the entire game and didn’t start anyone under 6’6. Mike Brey’s team had only one guy above 6’7 in their rotation and their best shot-blocker and rebounder was a 6’5 wing whom they played at PF. If they let Kentucky dictate the terms of the game, they would have been run out of the gym. Instead, they executed Brey’s Giant Killer game-plan almost perfectly, narrowly losing a 68-66 thriller that came down to the final seconds.

Kentucky is an NBA team upfront with three starters - Karl Towns (7’0 250), Willie-Cauley Stein (7’0 240) and Trey Lyles (6’10 235) - projected to go in the lottery and two reserves - Dakari Johnson (7’0 255) and Marcus Lee (6’9 225) - who could end up going in the first round. It’s almost impossible to score 1-on-1 against the Wildcats, as their historic defense has propelled them to a 38-0 record and a chance at immortality. With Cauley-Stein on the perimeter and Towns on the block, they have an elite 7’0 defender at both layers of the defense. They make each other better - Towns' ability to protect the rim gives Cauley-Stein the freedom to roam so far from the basket while Cauley-Stein’s suffocating brand of perimeter D makes it easier for Towns to clean up any penetration that gets through.

They have so much size, length and athleticism that you cannot score on them with the inefficient offenses that most NCAA teams run. The only way to score on an NBA team is to run NBA offense, which is precisely what Notre Dame did on Saturday. They spread the floor, they ran multiple pick-and-rolls, they moved the ball and they knocked down open 3’s. Notre Dame vs. Kentucky was a 2015 version of Tim Duncan’s Spurs vs. the Seven Seconds or Less Suns.

Notre Dame plays archetypal 4-out basketball under Brey, with two guards who can shoot 3’s and alternate as primary ball-handlers (Jerian Grant and Demetrius Jackson), a stretch 4 who can shoot and put the ball on the floor (Pat Connaughton) and a 5 who can set screens and roll to the rim (Zach Auguste). Kentucky was able to corral them when they played isolation basketball, but when they were running pick-and-rolls and moving the ball, they were getting open shots on almost every possession. Even when they weren’t scoring, the Notre Dame guards were forcing the Kentucky big men to rotate over, leaving Auguste wide open under the basket for putbacks.

The game was a textbook example of what a spread offense can do to even the best defenses. At the same time, it also showed the underlying weakness of most spread teams - the big men who can spread the floor on offense with their three-point shooting ability usually don’t have the size to hold up on the other end of the floor. That was certainly the case on Saturday, as Notre Dame had no answer inside for Towns, who scored 25 points on 10-13 shooting and scored almost every time he touched the ball in the second half.

The wrinkle that Brey added to the game was an absolute refusal to double the block, daring the Kentucky big men to beat 1-on-1 defense. What he didn’t want to happen was for Towns to get the Wildcats' shooters into the game. He was going to make the Kentucky big men earn their baskets rather than bail them out by giving them an easy pass to someone spotting up on the three-point line. In essence, Brey was running the numbers, gambling that over the course of the game the expected PPP of Notre Dame screen/rolls would be higher than the PPP of Kentucky post ups.

Brett Koromenos outlined the reasons for why coaches shouldn’t be so quick to double the post in a recent series of articles on RealGM. The basic idea is that it is hard to score in the post against a determined defender who is dug in on the block, regardless of the disparity in size. The reason post play is effective is not because scoring with your back to the basket is the most efficient way to run offense but because all those interior baskets force the defense to collapse, which opens up wide open 3’s.

The logic for staying at home on shooters is sound, but it’s hard to maintain your nerve as a coach when you are watching a guy like Towns dominate so easily around the basket. By the middle of the 2nd half, Towns had measured up Auguste and realized he could score over the top of him almost anytime he wanted. Kentucky abandoned almost all pretense of a half-court offense in order to throw the ball into him in the block. However, while Towns was an offensive machine on one end, Notre Dame was able to match him basket for basket on the other. Auguste finished the game with numbers almost identical to Towns - 20 points and 9 rebounds on 10-13 shooting.

Notre Dame came up short but they put together a pretty convincing case for why an underdog would want to play 4-out basketball against a bigger team. The Irish will have one guy drafted in the first round - Grant - and two more who have a shot to make the league down the road - Jackson and Auguste. If they had pulled off the upset, it would have been one of the biggest in the history of the NCAA Tournament. It would be hard to fault Calipari for job he has done this season, but if the ball bounces the other way a few times on Saturday, plenty of questions would have been coming his way.

The most obvious question is whether a post-up offense would have been the best way to maximize the talents of everyone on the Kentucky roster. For as great as Towns is on the block, he’s even better on the move, where he can maximize his quickness and ball-handling ability. If you let him play in as much space as Auguste has as a small-ball 5, there’s no telling how many points he could have scored on the undersized Notre Dame front-line. Spread the floor with multiple shooters, have Towns diving to the basket and let him pick apart the opposing defense.

Going forward, the biggest question NBA teams will have with Towns is whether to utilize him in post-ups or pick-and-rolls. What makes him such a great prospect is it can work either way. He has the perimeter game to play as a PF with a more traditional C, which would give him a huge edge in size against the vast majority of players he would face at the next level. He can also function as a small-ball C, where he would have a dramatic edge in speed and athleticism against his opponents. Towns is the best of both worlds for a spread coach - the skill to spread the floor on the offense and the size and speed to protect the rim on defense.

A lot will be determined by the composition of the roster of the team that drafts him. If he ends up playing with Joel Embiid in Philly or DeMarcus Cousins in Sacramento, he will be the PF part of a Twin Towers configuration. If he winds up playing with Julius Randle in Los Angeles, he will be a small-ball C for a team that should want to spread the floor and push the pace as much as possible.

Over the course of his career, it will ultimately come down to the philosophical bent of his coach and front office. Do they want to control tempo, pound the ball into the paint and try to wear out smaller teams at the front of the rim? Or do they want to speed up the game, spread the floor and try to wear out bigger teams along the three-point line? There’s no right answer - only the reality that a system can only be as good as the players running it.

Post-ups or pick-and-rolls? Karl Towns can either be a specter of the past or a vision of the future.