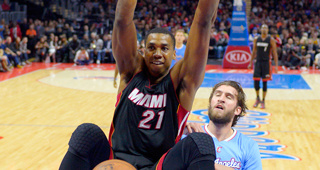 With the NBA regular season now complete, we take a look at the top ten D-League Gatorade Call-Ups from this year.

Every NBA season seems to have at least one major story out of the D-League, and this year it was Whiteside. The former second round pick by the Sacramento Kings in 2010 took a long road to get back to the NBA, including stops in the D-League, Lebanon, and China, but eventually showed why he was worthy of an NBA roster spot. Whiteside played just two games in the D-League this year, averaging 21.0 points, 15.5 rebounds, and 6.0 blocks per contest for the Iowa Energy, before Miami extended a contract offer. Once considered too immature and raw for the NBA after declaring for the draft following his freshman season at Marshall, Whiteside used his time overseas and in the D-League to mature and grow into one of the top rebounders in the NBA. His highlight of the year came on February 4th when Whiteside had 24 points on 12-of-13 shooting to go with 20 rebounds. Whiteside will certainly have a future in Miami’s long-term plans as an athletic 25-year-old center.

The first overall pick in the 2014 NBA D-League draft, Covington never actually played a game for Grand Rapids before he received the Call-Up. Nevertheless, last year’s D-League Rookie of the Year earned the Call-Up due to his impressive season he had with the Rio Grande Valley Vipers last year.  He averaged 23.2 points and 9.2 rebounds per game in Rio Grande and Philadelphia scooped up the talented 6-foot-9 wing before he took the floor with Grand Rapids this season. Covington ended up starting in 49 games for the 76ers and was the team’s third leading scorer at 13.5 points per game. The 24-year-old out of Tennessee State showed he’d certainly have a role in the NBA.

Galloway was a somewhat surprising Call-Up early in the season, as he wasn’t ranked as a Top 30 prospect by the D-League website at the time of his signing, but blossomed into a starting point guard for the Knicks. He was averaging 16.5 points, 5.9 rebounds, and 2.4 assists per game in Westchester before earning a 10-day deal with the big league affiliate. While New York struggled, Galloway was a bright spot, averaging 11.8 points, 4.2 rebounds, and 3.3 assists per contest. The undrafted rookie out of St. Joseph’s started in 41 games this year and head coach Derek Fisher spoke highly of his rookie season, telling Kenny Ducey of WFUV Radio, “I think he’s shown the type of mental toughness, and the type of grit, that as the skills develop and the experience comes, he can be a really solid player in this league for a long time.”

As the D-League’s leading scorer at the time of his Call-Up, it was no surprise that Brown became an instant offensive sparkplug in Los Angeles. He was a late addition, as he only played 19 games in the NBA, but averaged 11.9 points per game while shooting 41.2% from the field and 37.1% from three-point range. Brown ended the year on a high-note, scoring 32 points in the season finale against Sacramento. Head coach Byron Scott told Mark Medina of the Los Angeles Daily News earlier this year that Brown “is one of those guys next year who will belong in this league.” After declaring for the draft as a junior at Missouri and going undrafted, Brown proved that he could play at the NBA level. The 22-year-old will be monitored closely during the Summer League process.

Formerly known as Bill, the Kansas State product made an impact for Miami after being out of the NBA for the past two years. He bounced between the D-League, Venezuela, and Philippines before landing with the Sioux Falls Skyforce. Walker averaged 15.1 points per contest for the Skyforce while shooting 44.8% from deep and scored in double-figures in his first four games that he played in for the Heat. He started in 13 NBA games this season and used the D-League to get back into the league and make significant contributions.

Johnson was one of the biggest surprises from the D-League this season. The Fresno State product went undrafted, but shined in the Summer League with the Miami Heat before he landed with the D-League affiliated Sioux Falls Skyforce. He averaged 12.2 points in the D-League while shooting 54.8% from the field and 46.7% from three before Miami signed him to a 10-day deal. Johnson didn’t see much action on his first 10-day contract, but scored 13 points off the bench in a road win against the Celtics to raise eyebrows during his next 10-day deal. He ended the year with nine double-digit scoring nights and head coach Erik Spoelstra went as far to call Johnson “the model of player development.”  The athletic, 6-foot-3 shooting guard will hope to keep his roster spot with another strong Summer League showing.

While his offensive numbers may not jump off the page, Millsap carved out a role in Utah as an energizing defender off the bench. The 27-year-old saw his first NBA action this season after going undrafted in 2010 and averaged 19.7 minutes in 47 games this season. Head coach Quin Snyder praised Millsap’s energy and defensive ability numerous times this season as he stuck with the organization for more than half the year. Millsap should be on an NBA roster again next year as a defensive-minded 6-foot-6 wing.

After the Knicks found a young asset in Galloway, they went back into the D-League for another Call-Up at the end of the season. Ledo, who was cut by the Dallas Mavericks to create space for Amar’e Stoudemire, played in 12 games for New York and averaged 7.4 points per contest, including a 21-point showing against the Washington Wizards. Dallas Mavericks owner Mark Cuban told Marc Berman of the New York post that Ledo “is incredibly talented.” Cuban said the Mavericks “weren’t in a position to give him minutes to help his development” but obviously thought very highly of the 22-year-old. After spending a year at Providence – but never actually playing a game due to eligibility issues – Ledo has immense upside that he showed with a brief stint in New York. He’ll be an intriguing talent to follow over the offseason.

Johnson spent time with three different NBA teams this season, but showed promise in his final 12 games with the Jazz. The 6-foot-6 small forward scored in double-figures during his final three games and showed his strength as a defensive stopper. Johnson, a 24-year-old from Dayton, has now been on five different NBA teams in the past three years, but will look to stick on another roster next season. He’s the type of hard-working wing that makes a positive contribution anywhere he goes.

Cotton was another late addition that showed promise during the final stretch of the season. The 6-foot-1 point guard had one of the top highlights of the season with a left-handed alley-oop in a career-high 21-point showing against the Dallas Mavericks. Head coach Quin Snyder said of Cotton in an article by Aaron Falk of the Salt Lake Tribune, “I think he just fits what we want to do. [I like] his work ethic. I think he’s a communicative point guard.” The 22-year-old rookie from Providence was one of three Utah players on the list and will be another key youngster to watch in the Summer League process.