Cliff Alexander And NBA Teams Being Saved From Themselves 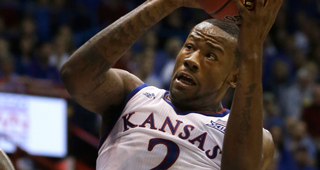 It was all good just a year ago for Cliff Alexander. The No. 3 overall player in the ESPN Top 150, Alexander was the best of the best, a McDonald’s All-American and a five-star recruit who had been pursued for years by every top program in the country. He had eventually chosen Kansas, where he would be the latest in a long line of future NBA big men developed by Bill Self. With Joel Embiid and Andrew Wiggins off to the NBA after only one season in Lawrence, there were plenty of minutes and shots available for Alexander and Kelly Oubre, who were expected to be an inside-outside force that would lead the Jayhawks to their 11th consecutive conference championship.

For all the knocks on the recruiting services, they do a pretty good job of identifying the top talent in each high school class. Of the 14 freshmen who went in this year’s first round, seven were in the Top 10 of the ESPN 150 and 11 were in the Top 15. The other three were ranked No. 18, No. 19 and No. 24. By the time they are 17-18 years old, future NBA players really stand out from the pack, often literally. They are bigger, faster and more skilled than their peers and they are playing a different game at a different speed than almost everyone else at the high school level.

Were it not for the one-and-done rule, the majority of the top ranked players in the class of 2014 would have gone pro directly out of high school. That would probably have worked out fine for the teams that drafted Jahlil Okafor and Karl Towns and Emmanuel Mudiay. The problem would have been for the team that wound up taking Cliff Alexander in the lottery. He went from a guy projected as a possible Top 5 pick before his freshman season at Kansas started to undrafted 12 months later. Guys like Alexander are why the one-and-done rule exists and they are why the NBA is going to fight to extend it to two seasons during the next CBA.

Alexander is the perfect example of how evaluators can miss on high school players and why NBA teams want to watch them at the NCAA level before they commit millions of dollars to them. At 6’9 240 with a 7’3 wingspan, Alexander was an athletic specimen with all the physical tools you would want in an NBA PF. He was a teenager with the body of a grown man and he could dominate his peers based purely on his size, reach and athleticism.

A huge part of his recruiting publicity came from how well he fared against Jahlil Okafor, a fellow Chicago product and the consensus No. 1 overall player in the class of 2014. Alexander was one of the only players in the country with the size and physical strength to prevent Okafor from overwhelming him at the front of the rim. On the other end of the floor, his speed and quickness allowed him to attack Okafor on defense and be a presence on the glass. While there was still plenty of kinks to be worked out in his game, it seemed like he was a pretty safe bet to have a 10-year NBA career.

It wasn’t until Alexander came to Kansas that the holes in his game became a little more obvious. He had the game of a center and the size of a power forward - he wasn’t capable of playing out on the perimeter and he didn’t threaten the defense as a shooter, slasher or a passer. His game was based around dominating smaller guys around the rim and for the first time in his life he was going up against guys who were bigger than him and just as fast as he was.

After focusing on offense for most of his life, Alexander struggled with all the demands Self put on his big men on the other side of the ball. As a result, he was constantly fighting for minutes with older but less-talented big men like Jamari Traylor and Landen Lucas. Kansas already had an All-Big 12 caliber PF in Perry Ellis and they rotated their three other big men at the C position. Alexander didn’t put up big-game statistics and he clashed with Self and his coaching staff, who didn’t need him playing a huge role in order to win games.

The talent was still there - he just needed more than one season of college to develop it. Alexander would have to turn himself into more of a role player in order to be able to play at the next level. Even if he was never going to be a perimeter-oriented player, he would need to become a more consistent jump-shooter, he would need to develop more moves in the post and he would need to become a much better team defensive player. If he was going to succeed at the next level as a small-ball center, he would have to be able to protect the rim and guard in space in the two-man game.

The problem was that Alexander and his family had always expected him to be one-and-done. Concerns about his high school grades and his connections with agents wound up sinking his career at Kansas. The Jayhawks held him out of the last few games of the season as well as the NCAA Tournament and he was forced out of school and forced to go pro before he was ready. Self might have been able to turn him into an NBA big men if he had stayed two or three seasons in college but he was still nowhere close to a finished product after his tumultuous freshman season.

The biggest problem for Alexander when it came to the NBA was that he wasn’t that physically talented enough to make up for all the red flags. He was a guy whose ceiling was probably as a 20-25 minute big man off the bench. He wasn’t big enough, athletic enough or skilled enough for the rules not to apply to him. A 6’5 PG like Emmanuel Mudiay could get away with playing only a few games in China without destroying his draft stock. A run-of-the-mill journeyman PF like Alexander couldn’t.

This year’s draft was positively overflowing with PF’s, most of whom were more developed and more ready to contribute at the next level than Alexander. With the league moving more towards small-ball, Alexander wasn’t just competing against 6’9-6’10 big men who could swing between C and PF, he was also competing against 6’7 wing players who could swing between PF and SF. Sixteen of the 30 guys drafted in the first round were in one of those two pools of players. There were so many other options besides Alexander that teams didn’t really need to deal with him.

None of this is to say that he can’t make it in the NBA. A guy with his physical tools will always get a chance and he wound up signing with the Brooklyn Nets summer league team. The best way for him to make a roster is to be an impact rebounder at the center position over the next few weeks - he doesn’t have the skill or the size of some of the guys he will be competing against but he can outwork them. The Nets could use more youth on their roster but they are already committed to two first-round picks - Rondae Hollis-Jefferson and Chris McCullough - both of whom play in the frontcourt. It will be an uphill battle for Alexander, who may end up spending a lot of time in the D-League.

He’s in a situation fairly similar to Thomas Robinson, another highly-touted PF from Kansas who hasn’t been able to stick at the next level. The difference is that Robinson is a much better athlete and he was much more polished coming out of Kansas than Alexander. Even if Alexander does make an NBA roster as an undrafted rookie, it’s pretty obvious that he was never going to be worth the lottery pick he was originally projected to be 12 months ago.

The one-and-done rule might be un-American but NBA teams are investing too much money in these lottery picks to not want a little more information than what they can glean from AAU basketball tournaments and high school All-Star games. More important than the money is the opportunity cost. A lot has to go wrong for an NBA team to finish in the upper half of the lottery and they need a quality young player they can sell to their fan base. Miss on a guy like Alexander in the Top 5 and you could set your franchise back years.

To be sure, all the extra information from additional years of college doesn’t necessarily mean that NBA teams will not make mistakes. Robinson was a junior at Kansas and he has now played on four NBA teams in four seasons after being taken at No. 5 overall by the Sacramento Kings. However, at least the Kings can console themselves with the fact that he put up massive numbers in college. Taking an unpolished guy like Alexander with a fairly low ceiling would have been devastating and they wouldn’t have even been able to salvage the pick by trading for a guy like Patrick Patterson, who would up being a key piece in the Rudy Gay trade.

All things being equal, NBA teams want more information on NCAA prospects and they want guys who are more capable of playing right away. They don’t want to spend millions of dollars developing a young guy on the bench when NCAA teams will do it for free. The logic of forcing kids to go for a 2nd season of college works just as well as forcing a 1rst as does the logic of why the players union will eventually fold on the issue. While the players union doesn’t appreciate the owners forcing guys to stay in school, folding isn’t taking any money out of their pockets. It’s a pretty easy bargaining chip to give away in CBA negotiations.

In the last few years, Cliff Alexander and Andrew Harrison are the two most prominent examples of elite high school recruits who wound up losing tens of millions of dollars in guaranteed money because they were forced to play in college. It sucks for them but the NBA is a business and fans of rebuilding teams want to root for guys who have a chance to live up to their draft pedigree. And when it comes to the draft, NBA teams need to be saved from themselves as much as possible.