The Future Of Canada's Big Men 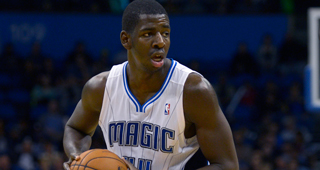 Maybe the most disappointing performance from any national team over the last month came from Canada in FIBA Americas, as they finished 3rd against a depleted field in Mexico City that was set up for them to win. Instead, they were shocked by Venezuela in the semifinals, giving up an 8-point lead in the final minutes and now they will have to play next summer against superior competition from around the world in order to qualify for the 2016 Olympics. The Canadians had by far the most number of NBA players in the field but they were almost all under the age of 25 so the tournament can be chalked up as a learning experience.

Going forward, Canada seems pretty set on the perimeter, with their two mainstays - Cory Joseph and Andrew Wiggins - already fairly well established in the NBA while Nik Stauskas and Brady Heslip provide the type of lights out three-point shooting that every team needs. The real question is what happens upfront, as the Canadian team featured a huge number of fringe NBA big men who are all trying to figure out who they are at the next level and what type of players they will become.

Kelly Olynyk: Olynyk had by far the most impressive performance of any of their young big men in Mexico City and he’s the one guy with a fairly secure place on the national team. His skill-set is really well suited for the international game and in that sense he reminded me a lot of a 7’0 Luis Scola, another guy whose always looked like a superstar in FIBA play. Even at the age of 37, Scola was still tearing up the court at FIBA Americas, including a 35 point, 13 rebound display against Canada which saw Jay Triano throw his entire frontcourt in an effort to slow down the veteran to no success.

Olynyk can do a little bit of everything on the offensive side of the ball. He’s a great shooter with the ability to put the ball on the floor and he has touch around the basket, allowing him to score from any number of angles. He can take slower big men off the dribble and put smaller players on his back and he’s lethal in transition, where he can spot up from the three-point line or take the ball himself to the front of the rim. He just has a real feel for scoring the ball and he was Canada’s best option in the half-court.

The problem is that for as good as he was on offense he was about as bad on defense. Running a pick-and-roll at Olynyk is pretty much an open invitation to create ball movement and an open look at the basket. He’s not very athletic and he doesn’t have the lateral quickness to contain penetration or the length and physicality to protect the basket. Defense is the major thing that Canada has to work on and that starts with their big men.

The big thing with Olynyk when it comes to translating his game to the NBA is that all the defensive issues are still there while the offense takes a major step back. He can abuse fringe 6’10+ NBA defenders 1-on-1, which is why he has always been a dominant summer league player, but his lack of elite athleticism comes into play when it comes to going up against the best defensive big men in the world. He can’t really physically outmatch guys like Serge Ibaka and if he can’t generate good offensive looks off the dribble he becomes a guy who doesn’t play defense and takes a lot of inefficient shots. This is the same problem Scola has faced as he has slowed down over the last few years.

There’s going to be a war for minutes in the Boston frontcourt next season, with Olynyk, Jared Sullinger, Tyler Zeller, David Lee and Amir Johnson all trying to establish a pecking order and that’s before Brad Stevens commits to playing any small ball minutes with guys like Jonas Jerebko upfront. If Olynyk can’t become more of a two-way player, his ceiling at the next level is probably a guy who creates offense off the bench and most coaches in the modern NBA would probably rather let their 2nd-unit guards handle that and bring in big men who can play defense.

Anthony Bennett: People who didn’t watch the Mountain West are going to have a hard time believing this at this point but Bennett was a dominant NCAA player. While few expected him to be taken No. 1 overall, everyone thought he would be a lottery pick. Two years later, he looks like a shell of the mismatch nightmare who could stroke from the perimeter, create off the dribble and finish at the rim. His confidence is gone, he doesn’t have a great foundation for his game and all of the defensive issues he had in college are still there, which is why he lost playing time as FIBA Americas went on.

The key for Bennett is getting him somewhere where he can play every day and regain a feel for the game. The problem is that isn’t likely to happen for him with Minnesota, which has a glut of young frontcourt players ahead of him in the rotation and nothing really invested in him. At this point, his best best of carving out a role for himself in an NBA rotation is as a three-point shooter and that’s not something the Wolves tend to emphasize under Flip Saunders.

There’s still hope for Bennett - he’s very young (he would be a senior at UNLV this season), he’s super athletic and he’s very skilled for a guy his size. It’s just a matter of when the light bulb comes on for him and whether he can overcome the stigma of being the No. 1 pick and everything that has gone wrong for him over the last two seasons. There are a lot of older, injury-prone players in the Minnesota frontcourt so Bennett is going to get run at some point in the season. When that happens, he needs to get out in the open court, simplify the game and just play basketball.

Andrew Nicholson: Nicholson is a guy who would have been assured of a long NBA career a generation ago. At 6’9 250, he is a prototypical PF who can play with his back to the basket, bang around the basket and stroke mid-range jumpers. Nicholson isn’t nearly as athletic as Bennett but he plays much more under control. He’s never really in a hurry when he’s out on the floor and he lets the game come to him rather than trying to force the issue.

The issue for Nicholson is the rise of small ball, the spread pick-and-roll and four-out basketball means the league is going away from players with his skill-set. He would be ideal as a second unit big man who can play out of the high post in a conventional offense. As is, though, a team that uses a player like that has a hard time spreading the floor and defending the two-man game and has a harder time leveraging their size advantage on the other end. Melvin Ejim getting more run as a small-ball 4 as the tournament went on is a good microcosm of this trend.

Nicholson could score over the top of smaller defenders in Mexico City fairly easily but it’s a lot more difficult in the NBA where the level of athlete is so much higher. That’s why the three-point shot that he has been trying to add to his game over the last few seasons is so important. While his playing time has declined in each of his three seasons in Orlando, the presence of an old-school coach like Scott Skiles could revitalize his career. If the Magic end up playing more small ball this season, Nicholson could be one of the big victims.

Dwight Powell: Powell didn’t play a ton of minutes at FIBA Americas and if I hadn’t watched him fairly closely in his rookie season with the Dallas Mavericks I probably wouldn’t be writing much about him. He was mostly used as an energy big man and finisher around the rim in Mexico City but he has a more well-rounded game than that. He can step out and shoot jumpers, put the ball on the floor and move the ball around as a hub on offense.

The biggest plus that Powell has going for him is that he’s the best athlete of all the Canadian big men. While he doesn’t have great core strength and he can get pushed around in the paint, he can really move his feet and get up-and-down. He’s a long way away from being this type of player but that type of athleticism could really help him when it comes to defending the pick-and-roll. He’s not a great rim protector but his skill-set fits with the way the league is going and he could carve out a role for himself ala Brandan Wright with the Mavs.

Robert Sacre: Sacre pretty much is who he is at this point in his career. He’s not a great athlete and he can struggle to finish around the rim but he’s a big body who knows how to play the game and isn’t going to kill you on either end of the floor. Even in a small-ball era, there’s always room on an NBA bench for a 7’0 260 guy who can be plugged in easily and sop up a few minutes here and there. It doesn’t hurt that his bench celebration game is totally on point. There are worse guys to have around the end of your roster.

What all these guys are going to have to figure out is that big men in the modern NBA have to be able to play good defense. A bigger team is supposed to give up something on offense in order to gain on defense. If my big men aren’t holding their own on that side of the ball, I could just play smaller guys in their stead who are more comfortable being offensive threats from the three-point line. After all, Canada could start playing Andrew Wiggins at the 4 and the minutes for most of these guys go right out the window.