Pau Gasol Vs. Rudy Gobert In the Eurobasket Semifinals 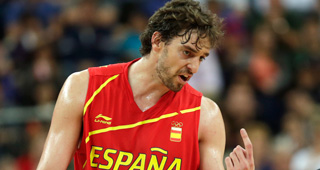 A year after France stunned Spain on their home court in the quarterfinals of the World Cup, the Spanish team returned the favor on Thursday with a dramatic 80-75 OT victory in the Eurobasket semifinals. Of all the storylines headed into the game - the best rivalry in international basketball, NBA players at every position, an Olympic berth on the line - maybe the most intriguing was the match-up between Pau Gasol and Rudy Gobert. It could have been a passing of the torch from one generation to the next. Instead, the 35-year-old showed the 23-year-old just how much more he still has to learn.

With Rudy Fernandez hobbled by a back injury and Marc Gasol, Ricky Rubio, Jose Calderon and Juan Carlos Navarro sitting at home, this version of the Spanish national team was a shell of the group that steamrolled through the first part of the World Cup. In a reverse of what happened in 2014, Spain came into the game against France having lost twice in group play and narrowly escaping the quarterfinals with a 73-71 win over Greece. The French, meanwhile, breezed undefeated through the first few rounds of the tournament with their full complement of players. If Spain was going to have any chance of pulling the upset, it was going to be all on Pau.

Coming into the game, the French seemed to have decided that they would live with Pau going 1-on-1 in the post. Even for as well as he had been playing in Eurobasket, it made sense. More often than not, scoring from the post isn’t what kills you - it’s sending extra defenders into the paint and giving up open 3’s. Doubling a passer as gifted and unselfish as Pau is playing right into his hands. He can see over the top of any defense and find the open man anywhere on the floor. With the other Spanish players struggling to create offense against their longer and more athletic French counterparts, there was no reason to give them easy looks from 3, especially when they could all shoot.

Just as important, France had the best interior defender at Eurobasket, if not the world. The best way to utilize a dominant rim protector is to extend your defense out on the perimeter and dare the opposing team to go into the paint and score over his outstretched arms. At 7’2 240 with a 7’9 wingspan, Gobert literally stretches the limits of human anatomy with the longest recorded wingspan in the history of the draft combine. Over the last 12 months, his presence in the lane turned the Utah Jazz and the French national team into dominant defensive squads.

The first time Pau got the ball against Gobert on the block, the French big man went Stretch Armstrong and poked it away, starting a fast break. After that, though, school was in session. Pau was playing with a purpose, a lifetime removed from the whispers of being a finesse player who didn’t like contact that followed him through the first part of his NBA career. At 7’1 250, he is more solidly built than his younger counterpart and he has a huge edge in old man strength. Instead of giving Gobert the separation to block his shot, he took the ball right to his chest and closed the space between them time after time.

The most impressive sequence came in the fourth quarter, when Spain mounted a furious comeback by throwing the ball into Pau every time down the floor. He showed Gobert every trick in the book - the spin, the step-back, the running hook and the up-and-under. Every move had a counter and every counter had a counter-move. It was the type of complete post game that a younger player like Gobert doesn’t get the chance to face very often. Most big men his age wouldn’t even bother trying to back him down. It’s step-out, face-up and pick-and-roll all the way down.

On the other end of the floor, Pau’s 7’5 wingspan allowed him to match Gobert length for length. In France’s victory over Latvia in the quarterfinals, where he had 13 points on 7 shots, all Gobert had to do was turn around and lay the ball in the rim. Pau could meet him above the cylinder - they were operating on a higher plane than just about everyone else at Eurobasket. Gobert didn’t alter his release point or try to make plays with the ball in the air, making it easy for Pau to block his shot three different times.

Where Gobert took advantage of the older Spaniard was on the offensive glass. Every time Pau didn’t put a body on him, he went right to the front of the rim, where his length and activity level make him a nightmare for the opposing team. Gobert was playing volleyball on the boards, grabbing 7 offensive rebounds and keeping the ball alive numerous other times. Most of his offensive production - 8 points on 7 shots - came from hanging around the basket and causing havoc.

The thing about Gobert is that he doesn’t need to score to impact the game. France was +11 in his 31 minutes on the floor and only one other French player (reserve swingman Mickeal Gelebale) finished the game with a positive margin. Gobert’s 2 blocks in the stat sheet (including a vicious swat of Nikola Mirotic) don’t do justice to his ability to cut off dribble penetration, choke off the pick-and-roll and create a no-fly zone in the paint. Maybe the most important thing Pau did was get him in foul trouble and eventually foul him out in OT.

Whenever he felt Gobert extending out one of his arms, Pau leaned in and created contact. As an older player carrying such a massive offensive load, he needed frequent trips to the line over the course of the game to save his legs. Pau was never going to win a game of running and jumping with Gobert and fellow 23-year old-Joffrey Lauvergne, who is going into his second season with the Denver Nuggets. When you shoot 16-18 from the free-throw line, you don’t have too. Playing in the post is not about how fast you are going as much as it is knowing how to get there.

No matter what happens in the championship game, Pau has already wrapped up Eurobasket MVP. The phrase “carrying a team on his back” gets overused but there’s really no other way to say it. He had as many points (40) as the rest of his team combined except he did it in 21 shots instead of 47. He shot 57.1% in a game where his team shot 38.2%. On top of all that, he was Spain’s leading rebounder (11 boards) and primary rim protector (3 blocks). Pau was locked in from the jump and he was not going to let his team lose. He even pulled out his best Kevin Garnett impression. It was a performance for the ages and it had to be one of the most satisfying wins of his career.

Gobert is 23. He has many Eurobaskets and international tournaments ahead of him. There’s no guarantee Pau will be able to suit up next summer in the Olympics, much less have been able to play in an qualifying tournament beforehand. He came into the game against France looking his basketball mortality dead in the eye. Father Time is undefeated and it’s the next generation of players who are his hands and feet. They do the work of pushing their predecessors off the stage.

Even with Pau turning back the clock, you could still feel the future breathing down his neck. After Nic Batum tied the game with 15 seconds left in regulation, Spain had the ball with the chance to win and everyone in the building knew where it was going. Pau faced up Gobert in the mid-post and went strong to the rim like he had so many times before. The problem was that he had exhausted all his moves - Gobert had seen them all. Pau’s legs were shot and he had run out of tricks. And when there are no surprises left and nothing left to show, there’s only one way it’s going to end. Gobert swatted the ball away and sent the game into OT. The old guy shows the young guy everything he knows and the circle of life continues.