When You're Only As Good As The End Of Your Bench 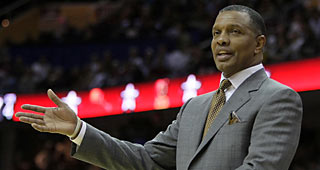 At some point in the last few months, Alvin Gentry had to have wondered what life would be like if he had stayed in Golden State. There isn’t an NBA assistant coach in the world who is turning down the chance to coach Anthony Davis in his prime but there’s no way Gentry could have expected the tire fire he was walking into in New Orleans. The Pelicans have a roster full of injury-prone players and they were once again unable to stay healthy, forcing their suddenly embattled new coach to abandon a lot of his game-plan coming into the season while rolling out skeleton line-ups without the talent to compete on a nightly basis.

Back in Golden State, Steve Kerr went down with unexpected complications from back surgery, forcing him to miss the first few months of the season and to hand over the reigns to interim coach Luke Walton. Walton, meanwhile, has guided the Warriors to one of the best starts in NBA history and looks all but assured of having his pick of jobs in the off-season. For all the concerns about Gentry’s lackluster track record as a head coach, does anyone doubt that he could have done a similar job with the Warriors? It always comes back to the players in the NBA and a coach can only be as successful as his front office allows him to be.

Everyone keeps waiting for injuries to bring Golden State to bring down but they have been able to succeed without Andrew Bogut for the first month of the season and they have even been competitive without Steph Curry, going 2-1 in their last three games without the MVP. The Warriors were down to eight healthy players against the Denver Nuggets on Saturday and they were still able to pull out an OT win thanks in large part to the heroics of Ian Clark, who finished with 15 points on 8 shots in 37 minutes off the bench.

That’s the big difference between the way that Golden State and New Orleans have responded to injuries this season. When Gentry has gone to the end of his bench this season, he has been forced to play NBA retreads like Toney Douglas, Kendrick Perkins, Nate Robinson and Jimmer Fredette. When Walton was forced into a similar situation, he could turn to an exciting young prospect (Clark) who looks like he might be able to stick in the league for awhile. There’s no way Douglas is going to be in the NBA in five years - he probably shouldn’t be in the NBA now.

To be sure, Clark is hardly a world-beater and it’s unlikely he would be as successful if he wasn’t in Golden State. There’s a reason he went undrafted and there’s a reason he was cut by the Denver Nuggets and the Utah Jazz last season. At 6’3 175 with a 6’6 wingspan, Clark is a classic tweener combo guard, with the size of a PG and the game of a SG. He’s not big enough to defend NBA wings and he doesn’t have the offensive game to run point full-time, which means he needs to be in a very specific situation to succeed at the NBA level.

Clark needs to cross-switch with bigger wing players like Shaun Livingston and Andre Iguodala, who can run point on offense and cover for him on defense. With Iguodala and Livingston dominating the ball on the 2nd unit, Clark can spot up off the ball on offense and guard smaller players on defense. He has thrived in that role since being given playing time thanks to the rash of injuries in Golden State, with per-36 minute averages of 18.7 points a game on 50.9% shooting.

The Warriors brought Clark into camp on a non-guaranteed contract and even on the defending NBA champs the battle for the 15 roster spot isn’t going to draw a lot of headlines. No one was expecting much from Clark and in a best-case scenario he would have spent most of the season playing in D-League. However, the brutal grind of the NBA schedule means that you never count on full health for your top players, even ones who have been as durable as Golden State’s core over the last few years.

That goes double (or even triple) for a team like New Orleans, who have struggled with injuries ever since assembling a roster full of young veterans around Davis. Unlike the Warriors, though, the Pelicans weren’t exactly beating under every bush in an order to find talent to fill out their roster. They went with bigger names who had already been recycled through the league several times (Robinson and Fredette) and a guy whom they had already cut the season before after 12 games (Douglas) and whom no other team in the league had shown any interest in.

It’s a revealing comparison because Fredette, Robinson, Douglas and Clark all have similar skill-sets. Like Clark, the three Pelicans retreads aren’t big enough to guard wings and don’t have the all-around offensive game to run point. Fredette and Robinson are offensive specialists while Douglas is a defensive specialist but all three are fairly limited players who would be exposed if given more playing time, which is precisely what happened when New Orleans had to turn to them following the raft of injuries to their frontline players.

Would Clark’s presence have made a huge difference for New Orleans or helped them to stay out of the massive hole their injuries had dug for them over the first few months of the season? Probably not. Nevertheless, he would have done a lot more for them than the grip of sub-replacement level players they were forced to turn too. Maybe his three-point shooting steals one or two games for them like it did for Golden State against Denver and that might end up being the difference when it comes to them making the playoffs at the end of the season.

The point being that when the Warriors needed their 15th man to play 30+ minutes in an NBA game they were able to turn to a hungry young player who was waiting for a chance to show what he can do instead of a washed-up older player who already had. There’s a world full of young basketball players who slipped through the cracks in their first stint through the NBA and there’s no reason for any of the league’s 30 teams to waste a roster spot on a proven commodity whose proven he can’t play anymore.

That’s what really jumps out to me about the situation in New Orleans. Once you get past their top 5-6 players, they have one of the thinnest rosters in the league. Gentry is far from a perfect coach and he has made a lot of head-scratching line-up decisions over the first few months but it’s hard to find the right answer when you are giving huge minutes to guys like Fredette, Douglas, Robinson, Perkins, Ish Smith, Luke Babbitt, Alonzo Gee and Omer Asik.

It would have been easy for Golden State to rest on their laurels this offseason and bring in older players to fill out the end of their bench in the name of veteran leadership. Instead, they targeted a fringe younger player whom they thought had the skill-set to fill a role on their roster and wound up with a keeper. Ian Clark could have been just as valuable in New Orleans playing off ball-dominant wings like Eric Gordon, Tyreke Evans and Jrue Holiday except their front office couldn’t be bothered to think outside the box.

When Walton is looking for a head coaching job this offseason, that quality should be really high on his list - does this front office have the ability to identify young talent and will they be able to find players who give me a chance to succeed? If he takes a job where that isn’t happening, he’s not going to be a head coach for very long.