The Subtle Details Of The Spurs' Stifling Defense 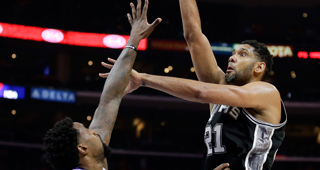 It’s become an annual storyline in the NBA -- as other teams steal the spotlight, the San Antonio Spurs cement their status as a Finals contender. This year is no different. After Golden State ran roughshod over the league to start the season, they earned themselves the distinction as the team to beat. But as we enter 2016, it’s the Spurs that are looking not just like a championship contender, but the clear favorite to hoist the Larry O’Brien trophy this June.

With the arrival of star free agent LaMarcus Aldridge and the MVP-caliber play of Kawhi Leonard, San Antonio’s dominance would seem to be linked to their well-known offensive renaissance. And well that’s partially true -- the Spurs now currently boast the league’s third best offense -- the team’s rise has instead been thanks a suffocating defense. On Monday night in their game against the Milwaukee Bucks, San Antonio showcased both the obvious and subtle elements in what may end up being a historically great unit when it comes to stopping opponents (more on that later).

Finding the key elements for Spurs' defensive success this season won’t take too long. Tim Duncan is still flat-foot denying opponents around the basket en route to securing the top spot in ESPN.com’s Defensive Real Plus/Minus rankings. Leonard is, of course, a nightmare for opposing wing scorers. The Spurs also lead the NBA in defensive rebounding percentage, force their opponents into the most mid-range shot attempts in the league, per NBA.com data and have an obsessive commitment to avoiding shooting fouls (and really fouls in general).

Combine all those ingredients and it’s obvious you have the makings of a group that’s going to be tough to score on. But a handful of clubs have outstanding defenders and/or a commitment to the analytically savvy approach to shot selection for their opponents. What really separates this San Antonio defense is just how effective the team is when it comes to two relatively simple concepts: ignoring non-shooters and using denials to throw off opposing offenses.

Facing a Bucks team loaded with players less than threatening from beyond the arc like Giannis Antetokounmpo and Jabari Parker, Gregg Popovich issued orders to just brazenly abandoned the non-shooters in order to shore up more vulnerable areas of the floor. Like when Boris Diaw positions himself far of Parker to help stop Michael Carter-Williams drive toward to the paint…

….and when Diaw, this time guarding Giannis, sinks deep into the paint to prevent Jon Henson from rolling to the rim for an easy bucket.

If you’re looking for how teams link an overarching philosophy like “make opponents shoot a lot of mid-range 2s” to a scheme, this is it.

In the first clip, Diaw basically contained Carter-Williams dribble penetration so the actual pick-and-roll defender (Aldridge) could tight to the rolling Henson. This had the trickle down effect of letting Leonard, who was guarding the Bucks Khris Middleton -- an actual threat from the 3-point line -- stick close to his man instead of helping on a rolling Henson. Essentially, Diaw abandoning Parker on the perimeter allowed the Spurs trade a “dunk or 3” scenario to a “long 2 or inconsequential pass out” advantage. The same is true for helping on the rolling Henson in the second video.

Now it’s easy to look at this and notice how obvious it should be for teams to ignore non-shooters in order to gum things up. After all, if a guy can’t shoot, why guard him? The dirty little secret about basketball, at any level, is that this is a really easy thing to mess up. And if you’re looking for more reason to heap praise on Popovich, this is it. Because not only is Pop more aggressive in basically abandoning non-shooters to an almost insulting degree, his teams rarely fail to execute his plans. It’s easy to think some form of incomprehensible genius is responsible for the subtle components of an elite defense, but in all reality, doing the obvious thing and doing it well (which is the hard part) is often all it takes.

Now utilizing pressure in an attempt to deny an opponent from their preferred course of action can be a bit trickier. NBA players, no matter what Twitter may say about some, are really, really good at basketball. And every time a defender tries to stop one of the five offensive players from getting the ball, he opens up additional space for another opponent to exploit a teammate. It’s why you don’t see NBA teams that full out deny every passing lane like some college teams.

That said, knowing when and how to execute a denial situation can be a huge weapon for a defense and this Spurs team does it with aplomb, as they showed in the third offensive possession of the game against the Bucks.

After Milwaukee’s Parker did this….

….to open the game, Popovich responded by having Duncan deny the wing pass to Greg Monroe. Monroe still makes the catch after some work, but the delay in timing threw off the play and forced Milwaukee to go away from a something that just netted them four straight points.

San Antonio also will use denials in specific situations that arise during the flow of a possession. In particular, they will sometimes deny a pass out from the corner, something that nets Manu Ginobili a steal in the second quarter against the Bucks.

A similar situation later in the quarter then allows David West to get a theft of his own as well.

Now these denials don’t always lead to turnovers. After all, San Antonio ranks just 18th in opponent turnovers, per NBA.com data and Popovich has never been the type to have his charges gamble for steals. The Spurs instead look to use these denials with a variety of results that range from those takeaways to even just simply forcing a few precious seconds to tick off the shot clock while the opposing offense works to get into their sets.

These more subtle tactics combined with the core elements above have added up to a Spurs defense that has a chance to go down as one of the best ever. Since the 3-point was introduced to the NBA in the 1979-80 season, only three teams have posted a defensive rating below 96.0 for an entire season, per Basketball Reference.

The fact that this current San Antonio team is on pace to wind up on this list is impressive for so many reasons, but perhaps most importantly because they’d be the first team to be this stingy in the NBA’s “D’Antoni era” -- where smaller, more skilled/shooting-focused lineups designed to unlock efficient looks have become commonplace. To assemble a squad this good, in this era of the sport is quite the feat.

And while the headaches opponents have going up against this defense is of course due largely to the presence of Duncan, Popovich and the emerging Leonard, opponents are finding out that the real devil of this defense is in the subtle details of the Spurs stifling scheme.