The World Of Possibilities Of Karl-Anthony Towns 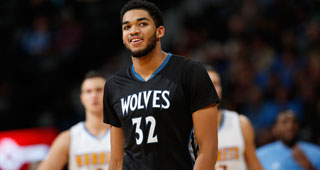 Maybe the craziest part about Karl-Anthony Towns’ rookie season is that he’s posting significantly better individual numbers than he did when he was a freshman at Kentucky. A year after averaging 10.3 points and 6.7 rebounds a game on 56.6% shooting at the NCAA level, Towns is averaging 15.9 points, 9.7 rebounds, 1.3 assists, 0.7 steals and 1.8 blocks a game on 52.3% shooting for the Minnesota Timberwolves. The jump to the NBA is supposed to be the most difficult transition in a young player’s career and Towns is making it look easy.

Everyone knew Towns was a major talent coming out of Kentucky - he was the consensus No. 1 overall pick in what is already looking like one of the strongest draft classes in recent history. However, it was hard to appreciate just how talented he was when he was sharing minutes on one of the deepest teams in recent NCAA history. Towns averaged only 21.1 minutes a game on a team that started the season 38-0 and sent seven players to the NBA and could have as many as ten future pros when it’s all said and done. He was the most important cog in the system but he was still a cog who shared the ball and subordinated his talents for the greater good.

Compare his situation to what Ben Simmons, the likely No. 1 overall pick in the 2016 draft, is dealing with at LSU. Simmons walked on to a team that lost its two best players to the NBA and featured only a handful of returning upperclassmen and a bunch of less-heralded freshmen who were happy to play a subordinate role to a ball-dominant superstar. He holds the ball for the entire game in a system built around maximizing his talent, which allows him to post the type of eye-popping individual statistics that get players talked about on ESPN and make them household names in a media world that has been taken over by daily fantasy.

There’s a lot more to scouting than scouting the box score. Too often the thinking becomes that Player X must be playing well because he’s putting up huge numbers, regardless of whether the holes in his game are affecting the overall play of his team. Towns was never seen in the same light as Simmons for the same reason that people assumed the Atlanta Hawks didn’t have a star despite being built around one of the most complete big men in the NBA in Al Horford. It’s easier to build a team around a player with no glaring weaknesses than one with a few pronounced strengths, even though it’s harder to discern their value at first glance.

The best way to describe Towns game is that he’s a super-sized version of Horford. At 7’0 250 with a 7’3 wingspan, Towns is an elite athlete who can slide between either position in the frontcourt and play at a high level on both sides of the ball. He’s a 20-year-old who came into the NBA with a developed post-up game, a developed face-up game, the ability to pick-and-pop out to the three-point line, attack a close-out and drive to the rim, finish in traffic, make plays through double teams, facilitate the offense out of the post and dominate the game at the front of the rim and on the boards. There are no real holes in his game, which is fairly unprecedented for a player his age.

Towns can do everything there is to do on a basketball court at a fairly high level and he’s bigger and faster than the vast majority of opponents he faces even at the NBA level. The result is a guy who hasn’t needed to adjust much at all to the NBA - the NBA has had to adjust to him. If you go through the last 10 drafts, even the best players in each of those drafts had something they needed to work on to get to the next level, whether it was shooting the ball for LeBron James and Blake Griffin, getting stronger for Kevin Durant and Steph Curry, or improving shot-creating ability for Anthony Davis.

Davis is an instructive comparison because the two wondrously gifted 7’0 who spent one season at John Calipari’s preps-to-pros factory in Lexington have so much in common. Davis is a 22-year-old who has been one of the best players in the league since the day he walked onto the court and he still has a ways to go in terms of being a post scorer, a three-point shooter and a passer. Towns is 19 years old and he’s already better than Davis in all three categories.

Maybe the biggest difference between Towns and Davis is just how big each of them are. The New Orleans Pelicans have mostly played Davis at the power forward position and have done everything in their power to protect him from the banging that goes on at the center position. Playing Davis at the 5 would be the best way to spread the floor and unlock the full potential of their team, but their reluctance to commit fully to those line-ups is understandable when you consider how many minor injuries Davis has already racked up in the NBA. Davis had to bulk up significantly once he got to the NBA - Towns came into the NBA at 250 pounds and the biggest thing he needs to worry about is not bulking up too much and affecting his mobility.

Towns could either be the best center or the best power forward in the league, leaving the Timberwolves with a world of possibilities when it comes to building a team around him. They are still playing him with training wheels at the moment and starting two 35+ year old players - Kevin Garnett and Tayshaun Prince - who are there to teach him the intricacies of NBA life on and off the court. As Towns and Andrew Wiggins become more established, Minnesota can slide them anywhere from the 5 and 4 positions to the 4 and 2 positions, depending on the type of players they acquire to put around their two stars.

If you are looking at building a team and evaluating an individual player’s skill-set within the broader context of the game, there are five basic things that a player can do - create their own shot, shoot the ball, pass the ball to someone else, rebound the ball and defend their position - from five different positions on the floor - C, PF, SF, SG and PG. Towns is the first player since LeBron who could theoretically do all five things from all five positions. His ceiling is Kevin Garnett with the ability to play center full-time and knock down 3’s at a high volume. In other words, he doesn’t have a ceiling to how good he can be.

The big story of the game over the last few seasons has been the rapid spread of the pace-and-space style throughout the NBA. Big men have gone out of vogue as teams with the ability to spread the floor and dominate from the perimeter have run roughshod over teams built around dominating the paint. It doesn’t matter how well a big man can score with his back to the basket or protect the rim if they can’t open up the paint on offense and move their feet on defense. Basketball is a big man’s game that has been taken over by smaller players and the inevitable response was big men who could move and play like guards. The ultimate endpoint of the positional revolution is the 7’0 point center and we may have found that player.