Grading The Deal: Bismack Biyombo Signs With Magic For $72M 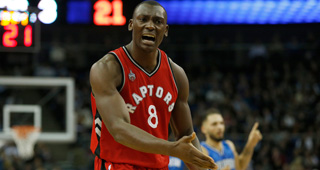 Bismack Biyombo proved his value with the Toronto Raptors on a two-year, $10 million deal that contained a player option and he cashed in with the Orlando Magic on a four-year, $72 million deal on the second day of free agency. The Charlotte Hornets declined to extend a qualifying offer to Biyombo just a year ago and now he returns to the Southeast Division on an annual contract value of $18 million.

Biyombo was a revelation in the playoffs, even receiving MVP chants from a besotted Toronto crowd during the final seconds of their Game 4 win in the Eastern Conference Finals against the Cavaliers. Seemingly out of nowhere, Biyombo became a plenty respectable generic drug version of Dikembe Mutombo.

Biyombo is a great defensive weapon with a perfect blend of size, athleticism and a 7’6 wingspan. Biyombo is still learning optimal positioning as a help defender but he’s excellent switching out on guards after screens, blocking shots at the rim and an excellent rebounder. The Raptors allowed just 100.6 points per 100 possessions with Biyombo compared to 106.1 with Jonas Valanciunas.

Biyombo is clearly a limited offensive player who will only generate points on rim runs, offensive rebounds and in transition, but he’s excellent in those situations. Biyombo scored nearly 1.2 points per possession as the roll man.

The Raptors were clearly better on offense with Valanciunas instead of Biyombo, but he represented their best efficiency in the postseason as they were 4.6 points per 100 possessions better with him.

The real age of Biyombo is a concern but that’s more of an issue for his next contract than this one, even if is several years older than his listed 23.

The issue for the Magic is their suddenly very crowded frontcourt. Nikola Vucevic is on a four-year, $53 million extension signed in 2014 and they traded for Serge Ibaka on draft night with a substantial, long-term raise due for him by next summer. Orlando also has Aaron Gordon and he’ll play the 3, but there’s no minutes leftover for him at the 4. Gordon is athletic enough to play the 3 defensively but they’re relying on a big improvement in his three-point shooting (29.6 percent on 142 attempts) to make it work on offense. Ibaka’s ability to space the floor at the 4/5 is invaluable but that comes between Gordon, Vucevic and Biyombo who you don't have to guard if they don't have the ball. It also locks in Mario Hezonja in a reserve role behind Gordon at the 3 and the re-signed Evan Fournier at the 2, plus they also inexplicably signed Jeff Green on a one-year, $15 million deal.

Vucevic’s contract is exceedingly tradeable and he feels like the obvious odd man out after investing heavily in Biyombo and Ibaka this offseason. A three-man rotation of Gordon, Ibaka and Biyombo with most of the 96 minutes at power forward and center would be the logical plan.

Biyombo is one of the better values in free agency so far and this is a good signing even if Rob Hennigan’s roster building remains as incoherent as it has always been with many talented players in a vacuum that don’t complement each other well. The next moves will be how this signing is ultimately judged.

Grade for Magic: B+

Biyombo turns 24 this August and his past season demonstrates why athletic bigs will keep getting chances to figure it out. There wasn’t a huge difference in Biyombo’s stats from his final season with the Hornets to his lone season with the Raptors but the context was entirely different.

It is somewhat surprising Biyombo didn’t get a richer deal in free agency considering some of the salaries agreed upon for fairly one-dimensional offensive players, but this is life changing money he earned out of his opportunity with Toronto.

Grade for Bismack Biyombo: A-

Unless they would have entertained trading away Jonas Valanciunas, the Raptors had to choose between Biyombo and DeMar DeRozan this offseason. Biyombo’s new deal is a better value than DeRozan but Masai Ujiri knows he has one of the better teams in the Eastern Conference without Biyombo while the possibility of replacing DeRozan is a massive unknown.

Toronto seemed to figure out an even more effective way to play with Biyombo instead of Valanciunas but that felt more matchup dependent and he’s on a more tolerable four-year, $64 million deal signed just last August.