Team USA Providing Glimpse Into The Future Of DeMarcus Cousins 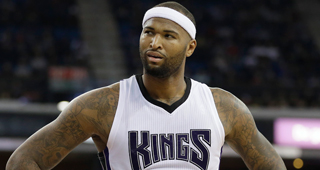 If you like basketball, the Olympics don’t offer much. Or they don’t offer more than, say, the NCAA tournament would if at the competition’s conclusion, Duke had to play the San Antonio Spurs. In Rio, the on-court intrigue will exist among the world’s second-tier basketball nations—France, Spain, Lithuania, Argentina—who are scrapping for silver and bronze medals. This isn’t a particularly strong iteration of Team USA and they should breeze through the tourney comfortably anyway, because while the Dream Team experiment worked in terms of growing global interest in the sport, it hasn’t produced many French or Argentine stars. America’s mid-aughts hiccup had more to do with disinterest and disorganization than any sort of talent deficiency, and now that USA Basketball has had its house back in order for nearly a decade, international competitions have once again acquired an air of perfunctoriness. This is as boring as superbly played basketball gets.

At this point, Team USA is defined mostly by its ancillary uses: namely, team plane karaoke Instagram videos and operating as a safe space for DeMarcus Cousins. At 25, nearly everything has been said about Boogie except that he’s easy to deal with. His boosters have not exactly flatteringly turned him into a Vine star and an object of half-affectionate fun, and his detractors are usually old guard types harrumphing about a lack of effort and leadership, as they do with a lot of players, but in Boogie’s case, they have at least the beginning of a point. The intermittently spectacular but ultimately dissatisfying early career of DeMarcus Cousins has been a two-way street of false starts and screw-ups, but anyone with a heart will feel he deserves to spend a month-plus winning games and playing with teammates who are up to his level, because he sure as hell hasn’t been able to enjoy that in Sacramento.

Let’s briefly run through the mistakes the Kings have made during the Vivek Ranadivé era, because the incompetence is staggering when laid end-to-end. In June of 2013, they signed a just-on-the-verge-of-washed-up Carl Landry to a four-year, $26 million contract. Landry proceeded to play 18 games in 2013-14. Then they drafted Ben McLemore (in an admittedly weak draft), who hasn’t panned out and whom they’ve been actively shopping for the past year. The following summer, they signed and traded Isaiah Thomas to Phoenix for nothing of value, drafted a marginal talent in Nik Stauskas, and couldn’t convince anyone of significance to sign with them in free agency. In December of 2014, Mike Malone was fired for not running an uptempo offense with a roster ill-suited to run, replaced by Ty Corbin, who was interim head coach, then actual head coach, then kicked upstairs into a front office gig in the span of just two months. Corbin’s successor was George Karl, who looked checked out by week three of his tenure and repeatedly publicly undermined Cousins.

A few weeks after Karl’s hiring, Vlade Divac took over as the franchise’s vice president of basketball operations despite seeming not to know basic salary cap and trade rules. That summer, Divac took Willie Cauley-Stein—a fine defensive big man with zero shooting range—about five spots higher than anyone thought Cauley-Stein would go; dumped Landry, Stauskas, Jason Thompson on the Sixers for the steep price of a top ten-protected 2018 first-rounder and pick swaps in two other drafts; and used the cap space to sign Rajon Rondo to a one-year deal. Meanwhile, Karl privately agitated for the Kings to trade Cousins, coached the team through a thoroughly dysfunctional 33-and-49 season, and was fired this past April. Then Divac hired Dave Joerger, which seems on paper like a pretty good move, and drafted Greek seven-footer Georgios Papagiannis, who was projected to go somewhere between the early 20s and the middle of the second round, with a lottery selection.

The Kings have already squandered Boogie’s developmental period. He has never played with another star, never had a coach for much more than a season. He’s in his mid-20s now, either already in his prime or on the cusp of entering it. Team USA serves as an opportunity for him to show his best self. He’s absurdly athletic, especially for someone who has always been a little chunkier than optimal, and he has one of the league’s rare polished back-to-the-basket games. Even LeBron James is uneasy about passing out of the post because of the decreased visibility and long limbs haunting the lane, but Cousins knows how to find cutters and spot-up shooters from the block. When motivated, he’s a versatile defender, if one who occasionally suffers from lapses in concentration.

Over the years, because of his temperament and the Kings’ sour obscurity, Boogie has been likened to an evolutionary Derrick Coleman, but the crucial difference between the two is Coleman’s greatness was always theoretical because he was his own worst enemy. Boogie is already obviously great; he’s just not realizing his full potential. And he could be twice as sulky and difficult as he is and not be more of a hazard to his growth than the Kings are.

This is why he’ll leave Sacramento eventually. He has danced on and off the trade block for three years now and has just two more left on his contract. Who knows how this will end: Vivek and his ever-rotating front office staff are erratic enough that even a doomed bid to resign Boogie is in play. But either way, Cousins will be out the door before he turns 28, when he should be at the peak of his powers. Perhaps he’ll apply himself in Boston with Russell Westbrook and Al Horford, or serve as a centerpiece of a young, resurgent Lakers squad. This is something to imagine and smile about while watching Boogie devour the Adriatic League’s big men en route to a gold medal. If Olympic basketball can’t be compelling, at least it can provide some fuel for pleasant daydreams.