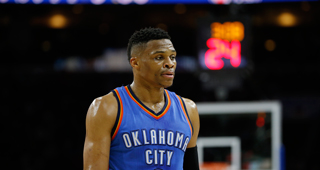 Russell Westbrook doesn’t need to be defended anymore. Charles Barkley makes fun of his outfits sometimes, but when you show up to games dressed like Thomas Pynchon’s idea of a drug dealer—Zontay Smurfblood, purest heroin this side of the Pacific, or at least La Brea—you’re going to catch some ribbing. Any lingering, slightly aggrieved Russ advocacy has the air of passé martyrdom: get up off your knees, friend, we’ve all agreed to get over the fact your god is a whit headstrong. Five years ago, insisting upon the greatness of Russ was a pointed description of your basketball sensibilities. These days, even on nights when he turns the ball over eight times because he’s convinced the perfect crossover might melt Klay Thompson, the consensus is that while Russ should be more careful, his recklessness is what makes him so ruinously effective. If he were to slow down, he wouldn’t be himself and he likely wouldn’t be as helpful to his team.

If there was a criticism of Russ that stuck around after he’d been canonized, it was that he could have stood to let Kevin Durant take over after clanking a couple off-the-dribble threes. With Durant in Oakland, that’s no longer a concern. No one is going to complain, if Russ shoots the Thunder out of a game down the stretch, that he should have deferred to Victor Oladipo. The team is an extension of Russ’s whims now.

This is... ideal? There seems to be a great Birdmanning of hands in anticipation of fully unrestrained Russell Westbrook, but the last instance of an all-time guard with a shoddy jumper and a selfish streak having an offense to himself was those post-Shaq, pre-Pau Lakers teams for which Kobe launched about 25 shots per game. Kobe was shimmeringly virtuosic during this span, but those squads were not particularly well-liked, and the title-contending ones that followed weren’t as difficult to appreciate. Kobe is most purely Kobe when he’s surrounded by Smush Parkers and Kwame Browns, but he’s more straightforwardly enjoyable with good teammates to grudgingly pass to.

Russ passes more than Kobe ever did, but it’s a perverse brand of giving: Russ distributes toward the same glory-seeking end that chuckers shoot, and besides that, he chucks too. There’s a long history of sports-thought that describes this sort of behavior as wrong in some faux empirical sense. Mostly it is just exhausting in certain contexts. We think what we want from a player whose game is defined by excess is to see how far that excess can stretch, but that gets boring after a while. Watching Russ Westbrook take over a half is thrilling. Watching him try to assume dominion over an entire season is going to wear you down, no matter how enthusiastically you root for it.

There will of course be Vines and highlights and statlines that look like someone plopped a couple D-20s into a blender. We’ll get some prime teammate-glowering and some baroquely pissy post-game pressers made even more comic by the presence of a shirt made entirely out of miniature hand-painted paper fans. If there’s a meaningful difference between Kobe and Russ, as Russ enters his Kobe-esque I will prove that a man can be an island phase, it’s that Kobe’s highly cultivated public image was an evolution of age-old athlete-as-gladiator claptrap and Russ’s is a strange bird that’s flown in from some other corner of the culture. They’re both creatures born from branding exercises, and gross and contemptible for that, but at least one is novel and vaguely whimsical. The Russell Westbrook experience isn’t like anything else. Whatever position he plays isn’t exactly point guard. He’s both purposefully aloof and furious when people misread him. You get the sense all the affectations cover up a deep personal boringness. He’s the most self-consciously artist-like basketball player since Iverson while also being, un-Iversonishly, the worst interview in the league.

This is enough to sustain us if we’re peeking in only occasionally on the Thunderverse, but anyone looking to do a close-read on Russ’s season is going to feel pummeled and spent by mid-January. The sport has only produced a handful of geniuses who could turn middling squads into must-watch entities, and Russ isn’t a member of that tribe. He’s more apt to blind Ersan Ilyasova with a disappointed sneer than turn him into a useful bench scorer. Ronnie Price might relinquish a double-digit lead and mysteriously quit the team two days later. Steven Adams, who is a talented lunatic, will probably be fine, but a midseason tiff with Russ that involves one party screaming at the other to do something like a man! is in play.

This season, first and finally, will be about a man and his limits: the limits of Russ’s ability, the limits placed on his id, the limits of taste, the limits of vengeance and mania as a fuel source. This is going to be a brutal 82-game slog into anti-heroicity. As a character study, it’s intriguing. As the premise for a basketball team, it’s worryingly thin. We’re pretty sure we’ve accepted Russell Westbrook’s flaws. He’s going to test that acceptance, continually, for six months, until we break or he does.