The Dad Mystique Of LaVar Ball 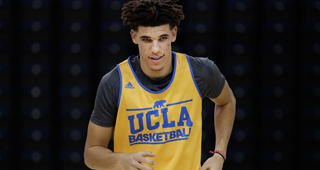 LaVar Ball is the most discussed non-player in all of basketball. Father to standout UCLA freshman Lonzo Ball, as well as rising SoCal high school players LiAngelo and LaMelo Ball, the 49-year-old and former NCAA athlete has swiftly emerged atop a category in the game that he seemingly invented himself: full-time hype man. Like Don King did for Mike Tyson and other boxers, LaVar is preceding his sons’ feats with a reel of hyperbolic myth-making that turns them into more than athletes. Before any of them have taken a shot in the NBA, the Ball family have already become legend.

The latest in a quickly accreting series of verbal challenges to NBA power is Ball’s suggestion that LeBron James’ children could not become superstars. James responded to this comment by saying that Ball should “keep [his] kids’ names out of [his] mouth,” joining a growing chorus of groans about Ball’s new celebrity.

LaVar has said that Lonzo is better than Steph Curry, that the bidding for any endorsement deal involving all of his sons is to begin at $1 billion, and perhaps most infamously that he himself could’ve at one point beaten Michael Jordan at 1-on-1.

Ball’s rhetoric is unusual for a parent of the game. The aforementioned Curry, Klay Thompson, Kobe Bryant, Luke Walton, and a slew of other modern players have had fathers play in the league, but none of them have been all that outspoken about their sons’ talents. Ball, a ho hum college player at best in his hey day, is making far more noise as a dad than he ever has as an athlete, and his recent splashes could very well be the beginning of an NBA fatherhood that has front offices, coaching staffs, teammates, and competing players bracing themselves in unique ways for the storm of defensive debates that will inevitably follow his sons.

Many of his critics have disqualified these boisterous claims on the evidence of his underwhelming play; Ball averaged just two points per game at Washington State. But his ability to make the basketball world lean in is undeniable—and when, anyway, has physical skill ever determined the ability or right to create meaningful bluster? Ball’s chatter has created a telling pole between the sincere and the whimsical throughout the sporting world. How seriously, in other words, should we really take any of this? This is at root of all the new conversations that he’s starting.

When asked on TV if his words are causing undue pressure for Lonzo, Ball shrugged off the possibility. “My foot on your throat, that’s pressure,” he said, evoking a series of images of true poverty and pain, of starvation and loss of life. “There’s no pressure in sports,” he said. “This is entertainment.” This is not him rescinding any of the gravity of his praise for his son, a surefire lottery selection in June’s NBA Draft with a high likelihood of going No. 1 overall. LaVar doubles down on his belief that Lonzo is the superior point guard to Curry, proclaiming with gusto that “we’re coming for everybody.”

What also comes across from Ball, in this and all of his rabble-rousing broadcast appearances, is an extraordinary level of love. The pride in his presentation when he says his sons were “ballers straight out of the womb” is Exhibit A in nurturing parenthood. He explains that Lonzo, LiAngelo, and LaMelo all committed to UCLA to stay close to their fruitful home, a sentiment that LaVar also extends in his loud wishes for Lonzo to end up with the Lakers for his rookie season, a scenario he says he will “speak into existence.”

Like so many of his declarations, this has been met with much disdain and weariness. The rapid celebrity of a man who’s taken sports by storm from the sidelines should lead us to take his gift of gab seriously, though. He’s already spoken his own relevance into existence, and created an aura of excess notoriety and intrigue around Lonzo that—however talented he may be—would not exist without all his dad’s talk.

And to be sure, Lonzo is damn talented. A lengthy, fast point guard who sees the game holistically as he seems to play with Win Shares as the premier statistic in mind, new Lakers’ GM Magic Johnson and the previously mentioned James are the best comparisons for the ambitions he sees the court with. While Lonzo, like everyone, is unlikely to reach the staggering Hall of Fame heights that those men hit, NBA front offices are viewing him as a potential franchise centerpiece for how high his motor, IQ, and motivation are running. As impressive as he’s been throughout the NCAA Tourney, in which he’ll resume play Friday as UCLA takes on Kentucky, it will take quite a bit for his play to surpass the consuming mystique of his father’s polemics.