The Phoenix Suns are winding down a seventh straight season out of the playoffs. This is after going nearly two decades without missing the postseason more than one consecutive season. And for a team that has a confusing mix of veterans and youth, that surprise playoff push in 2014 seems like it was an eternity ago.

The Suns' rebuild has featured that surprising run and not much else in terms in of success. A large part of that is due to duplication across the roster. By repeatedly doubling down on positions, Phoenix has created confusing logjams where veterans were signed to play minutes that probably should have gone to younger players. This has delayed their development, while also creating resentment up and down the roster.

At the draft, the Suns furthered the duplication issue when they drafted both Dragan Bender, with their own pick, and Marquese Chriss, after trading up with the Sacramento Kings. Both Bender and Chriss are seen as power forwards by most across the NBA. Phoenix believed Bender might be able to play some small forward, but that wasn’t very successful over the course of Summer League, pre-season and then early in the regular season. In fact, Bender has actually looked his best at center and that could help to solve the duplication issue at the power forward spot.

Bender suffered a severe ankle injury that cost him valuable time in his rookie year, but he also logged several DNP-CDs, as he struggled to adjust to speed of the NBA game. It could be argued that was in part due to playing out of position, but this summer will be pivotal for Bender to prove he’s ready to play in the NBA.

Chriss, on the other hand, has performed fairly well. He’s averaged 9.0 PPG and grabbed 4.2 RPG. He’s started almost the entire season and has flashed the athleticism that caused so many to be high on him at the draft. He’s also shown a willingness to step out and shoot the three-point shot as the season has gone along. With some improved defense and continued work on his offensive game, the Suns should have a solid rotation player at the worst, and a good starter on the high side.

Phoenix also added Tyler Ulis in the second round of the draft. After sitting for most of the early part of the season, Ulis began getting minutes as a backup in the second half of the year and has started the last month or so when Phoenix benched veterans Eric Bledsoe and Brandon Knight. Ulis has taken the opportunity and run with it, as he’s been solid as a starter. At the very least, he’s shown the ability to be a backup point guard behind a more established starter.

Free agency was fairly quiet for the Suns, but they added two familiar veterans, bringing back Jared Dudley and Leandro Barbosa. Both players went through periods where they played inconsistently, but have provided the sort of professional veteran presence off the bench Phoenix was seeking.

Where things went sideways for the Suns was the mix of veterans who are accustomed to winning, playing beside young players in key spots who need minutes to develop. If the veterans were of the Dudley/Barbosa mix and providing some stabilizing presence in the locker room and as reserves, it probably would have been fine. But when you have players like Eric Bledsoe, Tyson Chandler, P.J. Tucker and Brandon Knight, who are used to starting and playing big minutes competing alongside youngsters like Devin Booker, T.J. Warren and Alex Len, it lends itself to a messy situation.

For most of the year, Earl Watson split the difference. Booker and Warren have been starters for most of the year, as were Bledsoe and Chandler. Tucker, Knight and Len all got time off the bench. The results were fairly predictable with the old hands pushing for wins as best as they could, around the mistakes of the youngsters. Unfortunately for the Suns, none of the vets are so good that they could lift the team past the errors of youth.

On the bright side, Booker built on his breakout rookie year and has been even better as a sophomore. He’s averaged over 22 PPG and scored 70 points in a game at Boston. He’s proven to be every bit of the building block the Suns hoped he would be after last year. Warren has also enjoyed a productive season. He’s fought some injuries once again, but when healthy he’s shown the ability to provide scoring on the wing with his old school mid-range game.

As we head to the offseason, the Suns will have another very high draft pick. With Booker locked in at shooting guard, Chriss holding down power forward, and Warren at least passable at small forward, Phoenix could look to shore up the point guard spot. While Bledsoe had a terrific year and stayed healthy all season before being shut down late, there are questions about his fit long term in Phoenix. If the Suns are in position to draft either Markelle Fultz or Lonzo Ball, they would instantly be the future at point guard and Bledsoe could be shopped on the trade market to bring in more assets to be used down the line.

The question of trading veterans or not is one that will dog Ryan McDonough throughout the summer. In addition to Bledsoe, Phoenix has considered trades for Chandler in the past and has openly shopped Knight. Clearing the large salaries for those three would open up cap space and return assets in the form of young talent and/or draft picks, in addition to opening rotation spots for younger options. McDonough has tried in the past to push the timeline forward by adding veterans, but it hasn’t worked. That has him on shaky ground and it is unclear if he’d be able to sell ownership on moving forward around just the young pieces.

Of their own free agents, Phoenix is expected to try and retain both Len and Alan Williams. Len has started since Chandler was shut down and has shown some ability as a backup/spot starter. If his price tag gets too high as a restricted free agent, the Suns won’t hesitate to move on. The reason for that is the emergence of Williams. Williams is an under the radar free agent this summer because of his ability to rebound at an elite level and defend solidly inside. His offensive game needs polish, but he sticks to what he can do and doesn’t try to do too much. Because he averages a sparkling 15 rebounds per 36 minutes, Williams will have no shortage of suitors this summer. Fortunately for Phoenix, they have match rights, as he’s a restricted free agent. Expect the Suns to put more of an emphasis on retaining Williams vs. Len, should it come to that.

Overall, Phoenix has some nice young building blocks. Their leadership situation is a bit unstable, due to the years of struggle. McDonough and Watson haven’t won yet, and if they move the veterans they have, neither might be around to see the next iteration of the rebuild through. That puts the Suns in a tough place. The best strategy is to stay the course, make a smart draft pick, and then, if the opportunity presents itself, move the vets for players who can help down the line. After missing the playoffs for so long, folks are getting impatient. But one more year of rebuilding could pay off big time in getting the franchise back to the winning ways they were once used to. 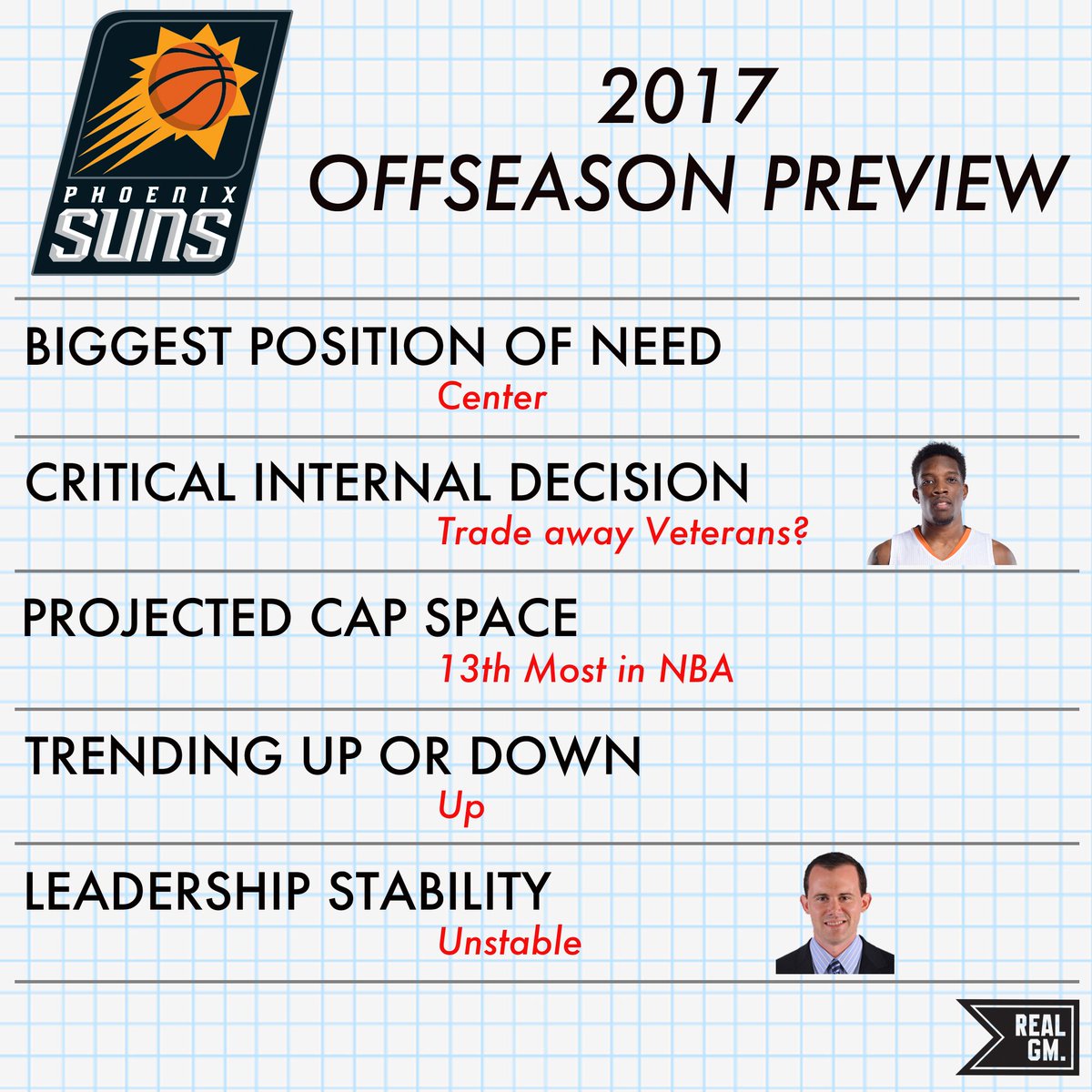