Only five years ago it seemed like the Oklahoma City Thunder would have the run of the NBA for years. They made an earlier than expected NBA Finals run in 2012 around a team full of young talent. Injuries and trades took the team from title contender to mere playoff team, before they rebounded to push the Warriors to the brink in the 2016 Western Conference Finals.

But things change quickly in the NBA and the Thunder weren’t exempt. It wasn’t just Kevin Durant leaving, but Serge Ibaka being traded, like James Harden before him. All of a sudden, Russell Westbrook was all that remained from a team many thought might own the Western Conference for years.

With the team his for the first time, Westbrook had a historic year. He averaged the NBA’s first triple-double for an entire season since Oscar Robertson back in 1962. But the Thunder had their season end in a disappointing five-game series loss to the Houston Rockets in the first round. Westbrook was brilliant, but it ended all too quickly, as have too many Thunder seasons.

Oklahoma City’s rebuilding of the roster around Westbrook started even before Durant announced he would join the Warriors. At the 2016 NBA Draft, the Thunder traded Ibaka to the Orlando Magic for Victor Oladipo, Ersan Ilyasova and the draft rights to Domantas Sabonis. After years of searching for another scorer to complement Durant and Westbrook, Oklahoma City added Oladipo to be that player. Ilyasova was set to be the short term Ibaka replacement, before giving way to Sabonis as the long term power forward. Instead, Sabonis won the starting job right away and remained there for the majority of the season at the 4.

In the summer, Durant signed with the Warriors and the Thunder pivoted quickly in their approach to the offseason. They renounced their other free agents and withdrew a qualifying offer for Dion Waiters, which allowed him to become an unrestricted free agent. Alex Abrines, who Oklahoma City had drafted in 2013, came over from Spain on a three year deal and was the lone addition to the rotation during the free agency period.

After adding Abrines, the Thunder chose to focus their resources internally. With Westbrook’s future in Oklahoma City in question, the team put an end to that by using their cap space to renegotiate and extend his contract. Westbrook received a healthy raise for the 2017 season and signed through 2019, with that final year being a player option. This gave the Thunder peace of mind that Westbrook would be unable to become a free agent until 2018 at the earliest.

Oklahoma City filled out the roster with small additions of players like Semaj Christon and Joffrey Lauvergne. And the last big moves made were to give a four-year, slightly below max contract extension to Steven Adams, and a four-year, $82 million extension to Oladipo. Both extensions kick in for the 17-18 season and run through 20-21 with no options.

In season, Sam Presti continued to tinker with the roster. With Sabonis starting at power forward and OKC looking to add some athleticism and to save some money, Presti dealt Ilyasova to Philadelphia for Jerami Grant. Grant proceeded to provide energy off the Thunder bench. But it was at the trade deadline that Presti made his big move.

Oklahoma City traded Cameron Payne, who had struggled as the backup point guard behind Westbrook, Lauvergne and Anthony Morrow to the Chicago Bulls for Taj Gibson and Doug McDermott. Sabonis had hit the rookie wall and Gibson was added to give the team a veteran presence up front. McDermott was added in the seemingly never ending quest to add shooting around Westbrook. Gibson took the starting role from Sabonis and gave the Thunder solid production at power forward. McDermott went through some ups and downs, but shot well enough that Oklahoma City has a keeper at the forward spot long term.

With Westbrook, Oladipo and Adams signed to extensions, the Thunder have three players who all make at least $21 million for next season. Add back up big man Enes Kanter and his $17 million to the mix and you have a very expensive roster for just four players. McDermott, Abrines and Sabonis are all in the fold and the team holds an inexpensive team option on Grant. That means the bulk of the roster is in place, but there are still decisions to be made this summer.

Gibson is a free agent and is looking at what is likely his final big payday in the NBA as he turns 32 prior to next season. While the Thunder would like to re-sign Gibson, he overlaps somewhat with Adams and Kanter at center, as well as Sabonis and McDermott as options at power forward. Given their already bloated payroll, it is no lock Gibson will be back. If he can find a bigger offer elsewhere, he will likely move on.

Oklahoma City also has to consider saving money for another starter who is a free agent in Andre Roberson. Roberson was extension eligible last year, but was allowed to reach restricted free agency this summer. He has turned into one of the top wing defenders in the NBA. He’s also a plus rebounder for his position, but still struggles on offense. He shot 24.5 percent from behind the arc and a paltry 42.3 percent from the free throw line. His free agency is a fascinating test case, as we are about to find out just how far teams will extend to pay a defensive specialist that isn’t a rim protecting big man.

Their other free agents are Norris Cole and Nick Collison. Cole was added late in the year and couldn’t beat out weak competition for backup minutes behind Westbrook. He could return but it would be on a veteran minimum deal.

Collison is a different story. He just completed his 13th NBA season and is the franchise’s last link to their Seattle days. Collison has never played for any NBA team but the SuperSonics/Thunder. He’s now a locker room veteran voice type, and has no real impact on the court. Similar to Udonis Haslem in Miami, Collison could be back, but it would be on a small deal to provide leadership.

Given the reluctance of ownership to go deep into the luxury tax in the past, it is a bit hard to see the Thunder making any big moves this summer. They need to add a quality backup to Westbrook, but may need to do so at the draft. Most veterans know there is no shot at the job being more than a 15 minute a night backup. That can be a hard sell to free agents, especially when the team is shy of being a true contender.

The Thunder will also try to sign Westbrook to a new extension using the newly created Designated Player Veteran Extension (DVPE). With the advent of the new CBA, players who have reached certain performance thresholds (MVP, DPOY or All-NBA awards are all triggers) and years of service, are eligible for the DPVE. Westbrook, by virtue of being an All-NBA player, is eligible to sign a new deal that could be for a starting salary of as much as just over $35 million. This would be a raise of approximately $7 million for the 17-18 season. Normally, because he just signed an extension last summer, Westbrook would not be eligible for another this summer. The NBA and NBAPA agreed to grandfather in Westbrook and James Harden and will allow them to sign using the new rules, should they and their teams agree. A new extension would add to luxury tax concerns for the the Thunder, but would further the belief that Westbrook will remain with the franchise long-term.

Outside of a new deal for Westbrook and possibly re-signing Gibson and Roberson, Oklahoma City is likely to add veterans on minimum deals and will look similar to how they looked at the end of last season. Presti will continue to search for upgrades and isn’t afraid to pull the trigger on a big deal. Unfortunately, we might have already seen the Thunder at their apex with the 2012 and 2016 playoff runs and might be left to ponder what could have been. 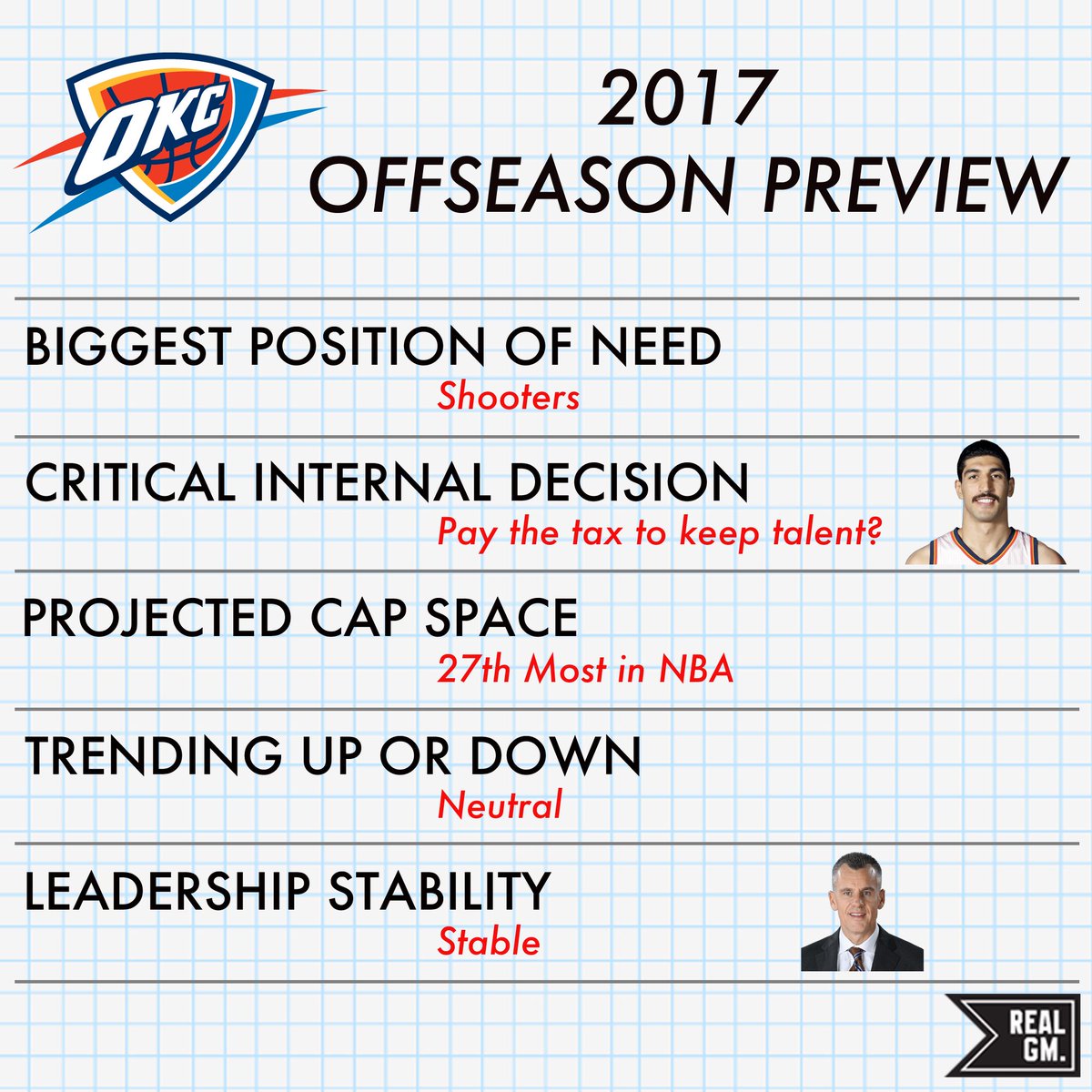