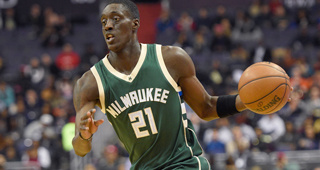 Tony Snell and the Milwaukee Bucks wasted no time when free agency opened by agreeing upon a four-year, $46 million deal. Snell is a perfect example of how a wing with switchability on defense and the ability to hit open three-pointers has never been more valuable and now he’s signed to a deal that’s below average for a starter.

The Bucks’ decision to trade Michael Carter-Williams for Snell was a brilliantly one-sided move by John Hammond, one of his final moves with the franchise. Carter-Williams cost the Bucks the opportunity to acquire the Los Angeles Lakers' 2018 unprotected pick but trading away Brandon Knight when he's about to get expensive and ending up with an affordable 3&D wing isn't a bad outcome at all.

Snell shot 40.6 percent on 7.7 three-point attempts per 100 possessions with the Bucks after hitting 37.1 percent and 36.1 percent his previous two seasons with the Bulls. Snell is a proven three-point shooter and could be even better as hit 39.4 percent from the corner.

Snell’s value hitting open three-pointers and rarely turning the ball over is as much as offense the Bucks need alongside Giannis Antetokounmpo, Jabari Parker and Khris Middleton. Snell also is good enough defensively to typically take the tougher wing cover instead of Middleton. The Bucks’ defense improved by 4.4 points per 100 possessions without Snell on the floor, so his actual value may be best described as expending energy on that side of the floor to free up their scorers.

Similar to how the Bucks approached the restricted free agency of Middleton in 2015, they moved quickly before Snell could truly test the market and this is a value contract for a small market franchise that has tax concerns, particularly if they keep Parker on a raise coming off his rookie contract within the next 12 months.

Grade for Bucks: A

As much as the trade greatly benefitted the Bucks, getting out of Chicago for a perfect fit on a team that was on the cusp of taking the next step beside a top-15 talent was perfect timing for Snell as he approached restricted free agency. Snell never played more than 1,412 minutes during his three seasons with the Bulls, but that jumped to 2,336 as he became a starter with Milwaukee.

As the 20th overall pick who looked like he would max out as a rotation guy, Snell is now an eight-figure a year player.

Grade for Tony Snell: A-