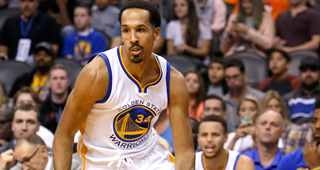 Letting Andre Iguodala leave in free agency would have either been more #LightYears maneuvering, or a decision of frugality that compromises their dynasty and sobers up the rest of the core on the limits of loyalty from ownership. Iguodala squeezed out the most money possible by playing the market with every Western Conference team possible bidding against the Warriors and ended up with a three-year, $48 million deal.

Physical maintenance is the main concern with projecting how many productive seasons Iguodala has remaining. There are only a few nights in May and June each year where they Warriors truly need Iguodala to be his healthy younger self. Iguodala was there in 2015 when they won The Finals and he was MVP, not quite there in 2016 when they lost in seven and LeBron James chased him down, and he was there again in 2017 when the Warriors won.

Iguodala is one of the most cerebral players in the NBA on both ends of the floor and is physically declining from one of the best combinations of athleticism and length on the wing, so he should remain at somewhere close to this level for Year 1 and probably Year 2. By Year 3 of the deal, McCaw will probably be outplaying Iguodala as he eases into a veteran emeritus role for as long as he wants to collect veteran’s minimum deals with the Warriors.

McCaw looks close to being ready to fill the Iguodala role, but they realistically need them both for another couple of years at the very least. The Warriors are encouraged by McCaw and would have felt cautiously optimistic that they could get by without Iguodala, but messing around on the margins and with the run of comparatively good vibes around the team is too significant of a risk to save cash.

The long-term ramifications on Iguodala’s deal will be most felt when Klay Thompson receives a raise in 2019 that jumps from just under $19 million to upwards of $33 million per season. The Warriors could be looking at more than $300 million in salary and luxury tax payments. The Warriors will also be opening their new arena in San Francisco that year, which should make that a tolerable tradeoff, especially if they’re coming off their fourth title in five years.

Grade for Warriors on Iguodala: B+

This deal is dripping with Iguodala’s hustle after he got out on the open market when the Warriors were understandably as concerned about their long-term tax obligations as they were losing him to a rival.

Iguodala is coming off a four-year, $48 million deal that he outperformed, not only in terms of on-court production, but in changing the culture of the Warriors. Golden State transformed defensively under Mark Jackson and Iguodala played a huge role in doing so along with Andrew Bogut. The Warriors took another step forward when Draymond Green became a starter and a Defensive Player of the Year candidate, but it largely began with Iguodala.

This will likely be Iguodala’s final major contract and this is a significant payout. Despite coming to the Warriors during the middle of his career, Iguodala deserves special player status and worked to get it.

Grade for Andre Iguodala: A

Unlike Iguodala’s grind for his contract, Shaun Livingston and the Warriors quickly agreed upon a three-year, $24 million deal soon after free agency officially opened.

Livingston became a little less essential for the Warriors this past season and his play fell off a little bit at times. When he plays with Stephen Curry, he plays more like a wing than he historically did as the point guard of the second unit. This is a bit of an issue since Livingston doesn’t shoot three-pointers, but there’s usually enough other shooters on the floor for the Warriors to not become problematic. Livingston’s passing and ability to shoot over his man in the mid-range isn’t going away.

Defensively, Livingston remains a plus option on defense and highly versatile with his switching and ability to defend most small forwards.

The Warriors have wanted to avoid the middle tier of NBA contracts and while this contract and Iguodala’s begins to approach that level, the production exceeds the value in both instances for the pair of Illinois natives of the 2004 draft class.

Grade for Warriors on Livingston: A

We’ll never know how good Livingston could have become if not for his horrific leg injury early in his career, but I think we can safely surmise it would have been excellent based on how well he’s played these past few seasons with the Warriors. Staying healthy, winning a pair of rings with the possibility of a few more, plus another $24 million is one of the NBA’s best comeback stories.

Grade for Shaun Livingston: A

Durant is taking a little mess money and risks not signing a long-term deal this offseason, but his sacrifice keeps the critical elements of the Warriors’ core together.

Grade for Kevin Durant keeping core together: A