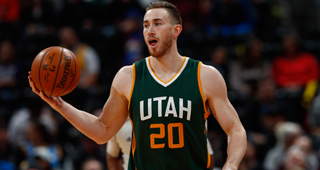 With Stephen Curry and Kevin Durant undramatically re-signing with the Warriors, Chris Paul orchestrating his opt-in and trade to the Rockets, and the Pacers preemptively trading Paul George to the Pacers, the 2017 free agency period will be remembered for Gordon Hayward’s three franchise tour and prolonged 4th of July decision to leave the Utah Jazz for the Boston Celtics.

While a clear notch below the perennial All-Star elite, Hayward has become one of the game’s best all-around wings. Hayward ranked 29th in the NBA in Real Plus Minus, a good ranking but perhaps a little lower than expected due to his low usage for a player of his caliber. At the early end of his prime years, Hayward's easily a top-20 player in the NBA at the most coveted position in the game.

Hayward did post career highs in True Shooting Percentage, usage, rebound rate and points per game. Hayward is consistently a high 30 percent three-point shooter and also gets to the line at a really good rate. Hayward is a highly talented offensive player that can score in a variety of ways and consistently gets buckets in the fourth quarter when the game slows down.

Hayward has also developed into an above average defensive player, both in terms of scheme and in individual matchups. Hayward also has added strength to competently defend certain power forwards to give Utah more optionality to play small.

Utah had two Hayward lineups in the top-8 of the entire NBA in Net Rating and will join another set of excellent role players who can defend, pass and shoot the 3 with the Celtics.

Boston offered Hayward his college coach, a good supporting cast with another excellent individual scorer in Isaiah Thomas, and an infinite number of ways for the roster to get better. Thomas taking the majority of the fourth quarter shots and being a severe liability on defense may have given Hayward reservations, but that was the only obvious negative. This team would have been more dangerous in the short-term and especially the long-term if they would have kept Markelle Fultz and also traded for Paul George while signing Hayward with the expectation of letting Thomas leave in free agency next year.

A small forward depth chart with Hayward, Jaylen Brown, Jayson Tatum and Jae Crowder needs some rebalancing, especially since Al Horford prefers to play power forward, and the only center projected to be on their roster in 17-18 as of right now is Ante Zizic. A trade for Marc Gasol or DeAndre Jordan would make a lot of sense for Boston, who tried to get him in those 2013 Doc Rivers talks. Boston will have an interesting dilemma balancing their desire to compete now while also extending their title window developing high upside younger players and their future draft assets, especially since one of those players could become the true superstar they have lacked, or maybe they could be aggregated out for Anthony Davis next summer.

Grade for Celtics: A-

Utah’s decision not to sign Hayward to an extension in 2013, followed by allowing him to sign a three-plus-one with Charlotte in 2014 as a restricted free agent put him back on the market two seasons earlier than he could have and now he’s gone. The Jazz were only about $1 million apart from Hayward during those talks and they now will lose millions in revenue and a ton of wins letting him go in the peak of his prime.

Now they must reset one of the NBA’s most talented supporting casts with the best defensive center in the league in the Western Conference no less.

Since the short-sighted handling of Hayward’s restricted free agency, the Jazz were a model franchise in terms of building around a player of his ability. Hayward liked Quin Snyder and the culture of the Jazz, who have an excellent track record in terms of player development and identifying players in the draft. They’ve also consistently done an excellent job maximizing their resources surrounding Hayward, whether it’s trading for George Hill and Boris Diaw and signing Joe Johnson last offseason, then trading for Ricky Rubio this year and trading up for a high upside guard in Donovan Mitchell.

The Jazz with Hayward would probably beat the Celtics with Hayward in a mythical Finals, but it’s infinitely easier for that Boston team to reach the actual Finals in the Eastern Conference, even when factoring in the immovable LeBron James.

Grade for Jazz: B

Even before the apparently wavering on the final day, or at least long enough to complete his final Players Tribune rewrite, this felt like a legitimately difficult decision for Hayward with three attractive options you can make highly compelling arguments for and against, especially with how the Eastern Conference has become an even weaker conference this offseason.

The five-year contract versus four-year security was less important for Hayward given his age at 27. There is a reasonable expectation that Hayward will continue to command a five-year or four-year max when he becomes a free agent again, and can now do so again in 2020 with his three-plus-one deal when he can also sign a full 35 percent max.

Hayward could have even gambled on the short-term situation of the Jazz and his ability to qualify for the supermax by making an All-NBA team in 17-18 by signing a one-plus-one contract to re-sign in 2018.

Hayward's decision had to come down to playing in the Eastern Conference and the seemingly unlimited ways Boston can improve their roster.

Grade for Gordon Hayward: B+