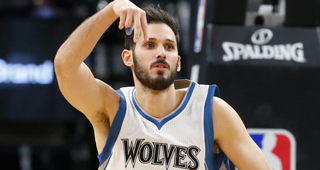 The Golden State Warriors’ position of strength is perhaps best felt in the offseason when they seemingly have their pick of rotation player free agents. When you have four of the best 15 players in the league and they each complement each other, even imperfect players fit in expertly. The Warriors wisely prioritized shooting and defensive versatility in agreeing to terms with Nick Young and Omri Casspi. The way they approach free agency has become formulaic, yet constantly unpredictable on who they actually sign.

Over the past few months, Golden State has expressed interest in Jamal Crawford and even signing Jose Calderon for a few hours, but neither player fits in and can do as many things as Casspi and Young, while Matt Barnes is past the point of making a meaningful impact.

When we initially considered Kevin Durant joining the Warriors, we thought of how much they’d be better in simply swapping out Harrison Barnes in their Death Lineup. But Durant also allows the Warriors to swap out Draymond Green as the center of the Death Lineup with both Young and Casspi able to function in the Harrison Barnes role with their versatility on defense while they’re both far more reliable three-point shooters. The same goes for Patrick McCaw in the Andre Iguodala role.

Young was nearly out of the NBA this time last year when the Lakers were considering waiving him just to move on with their rebuild without the extraneous distraction and elite chucking, but he had a productive season in which he applied himself on defense and continued to be more judicious with his shot attempts. Young’s usage rate dropped from his peak Swaggy P seasons at 26.0+ to sub-20.0, taking more three-pointers and fewer long two-pointers. Young shot 40.4 percent on 13.2 three-point attempts per 100 possessions last season. The utility of what Young does is perfect for the Warriors' second unit.

On the surface, Young becomes this year's version of JaVale McGee but McGee wasn't even guaranteed a roster spot and was on the minimum while earning his roster spot in camp, while the financial commitment to Young is significant. Young isn't in need of proving himself all over again, however, as Luke Walton already put in that work for the Warriors this past season.

The Warriors have become progressively better in every season since 14-15 instead of merely trying to sustain and getting the margins of their roster chipped away at.

Grade for Warriors on Nick Young: A

Young opted out of his contract with the Lakers and found a contract for almost as much money with the team most likely to win the title. Young will be featured in a way that perfectly showcases his game and he can likely move on to another team in 2018 on a final multi-year deal.

Grade for Nick Young: A

Casspi has enigmatically bounced around a lot during his career despite being a career 36.7 percent three-point shooter who can defend most forwards at either position.

The Pelicans unwisely released Casspi following his thumb injury during his first game following his trade in order to create a roster spot. Casspi would have fit perfectly with New Orleans and they could have paid him more than the veteran’s minimum since they had his Bird rights.

Grade for Warriors on Omri Casspi: A

Casspi has never appeared in a playoff game and he has a career record of 180-319. Casspi will have the chance to showcase his game in a winning situation and become a free agent again at the age of 30 in 2018.

Grade for Omri Casspi: B+