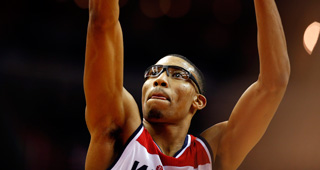 After his lackluster first season and a half in the NBA, Otto Porter appeared to be just another member of a disappointing 2013 draft class as he struggled with injuries and overall ineffectiveness. But Porter emerged towards the end of his second season after improving his shot mechanics and being mentored by Paul Pierce. Now he'll be on a four-year, $106 million max contract following the Wizards' decision to match Porter's offer sheet with the Nets.

Porter is a low usage, system scorer, but he’s remarkably efficient in the role. Porter can create his own offense at times, but is better served as a third option as he struggles to beat even average defenders off the dribble. Porter shot 43.4 percent on three-pointers last season, which was fourth in the NBA, a jump from 36.7 percent in 15-16. Porter hit 42.3 percent of his corner three-point attempts. Porter’s shot lacks aesthetic beauty but there’s enough of a sample size to believe in it as being sustainable at least in the high thirties.

Porter’s True Shooting Percentage improved from .564 in his third season to .628 this past season. He’s probably closer to a high .500s player with this being a career season in which defenses are still catching up on his scouting report to get out on him now that he’s shooting and hitting so many three-pointers. John Wall specializes in getting open shots for spot-up shooters and

Porter’s efficiency even manifested itself in terms of rarely turning the ball over as he led the NBA in turnover percentage.nbsp;

Porter has positional versatility with his length to slide up to a smallball power forward. Porter also rebounds well and forces turnovers at a high rate for his position. Porter is more versatile defensively than he is actually a difference maker who can truly stop better scorers due to his lack of strength and athleticism.

Porter ranked sixth in Real Plus Minus last season amongst small forwards, but that probably overstates his impact. Porter’s value comes from an uncomplex combination of playing the NBA’s thinnest position, off the ball efficiency, defensive versatility, and the lack of options for the Wizards to replace him and remain a top-4 team in the Eastern Conference.

Porter’s best case scenario is as a third or fourth option yet he’ll be the Wizards’ highest paid player in 17-18 unless John Wall signs a supermax. If Wall doesn’t sign that supermax, the Wizards will quickly learn whether this contract passes Danny Leroux’s Nene test on whether a contract is easily tradeable as they likely rebuild from scratch. Porter's contract becomes far more acceptable from Washington's perspective if they keep their core of Wall, Bradley Beal and Porter together while looking to improve around the margins.

Grade for Wizards: B

Non-automatic max players who are restricted free agents sometimes struggle to quickly find a resolution. David Falk is too good at his job and the Wizards lacked any alternatives, short of using Porter in a sign-and-trade for Paul George, not to come up with a resolution.

Instead of embarking on an exhausting and prolonged process waiting for the Wizards to offer a five-year, full max, Porter and Falk engaged the Kings on a four-year max before signing one with the Nets.

With how quickly cap space is evaporating, Porter wasn’t in position to risk taking the qualifying offer to only get a four-year offer a year from now when he’s nowhere near an All-Star level talent.

Grade for Otto Porter: A

The Nets again attempted to improve their roster via the restricted free agency market and this was a more logical use of resources attempting to sign a definite starter quality small forward than rotation players like Allen Crabbe and Tyler Johnson.

Brooklyn found their starting small forward for 17-18 while picking up two 2018 draft assets taking on the salary of DeMarre Carroll from the Toronto Raptors. Since they can’t forcibly sign a restricted free agent short of a Tim Hardaway Jr. offer sheet, the Nets’ continued strategy of picking up assets for teams looking to clear burdensome salary works in this final stage of limbo before they can start using their own picks again in 2019.

Grade for Nets: B+