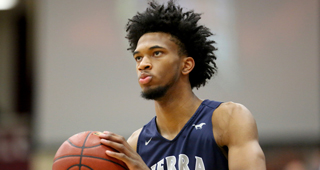 Marvin Bagley III announced on Monday that he's reclassifying to the 2017 high school class and joining the Duke Blue Devils for next season. The 6'11 big man might have to wait a little bit before the NCAA rules him eligible, given he made his decision to move on to college really late in the process, but ESPN's Jonathan Givony tweeted his father is said to have been keeping his documentation diligently in order and everything should work out in the end.

The expectation is for the 18-year-old [1] Bagley to be one-and-done and join what's already viewed as a highly touted 2018 NBA Draft class, at least at the very top. Givony released his first mock draft on Tuesday and the lefty is ranked second.

At Sierra Canyon, Bagley had plenty of opportunities to create a shot from the post and the team spaced the floor fairly well around him. But though he flashed his ball skills and coordination on a few face-up drives and in transition, he was not given any chance to create from the perimeter against a set defense in the games against Oak Hill Academy and Nathan Hale - which this evaluation is based on.

Bagley was also not put in the pick-and-roll a whole lot in this game, which was disappointing.

Defensively, his energy and intensity were nice to see. He contested a lot of shots near the basket and worked hard on the glass. Bagley also even flashed some intelligence switching on the fly, which Sierra Canyon did a little bit of - a matchup zone of sorts. There's still room for him to improve as a positional defender, though, rotating preemptively to keep opponents from getting to the basket to begin with.

Bagley's biggest appeal at this point of his development is his agility and coordination, which are above average for someone his size.

Those translate on offense in:

Defensively, Bagley was very proactive stepping up to protect the front of the basket going up vertically off two feet and coming off the weak-side to block shots off one foot in help-defense. According to d1circuit.com, he blocked 60 shots in 20 appearances for Nike Phamily in the Nike EYBL circuit last month.

Bagley also proved himself attentive to his boxout responsibilities and showed excellent instincts and quickness chasing the ball off the rim -- collecting almost nine defensive rebounds per game in the AAU event.

In high school, Sierra Canyon had him hedging-and-recovering against the pick-and-roll and Bagley proved himself quick enough to prevent the ball-handler from turning the corner right away and then getting back to his man in a timely manner.

When he dropped back against dribble drivers who got downhill, Bagley showed he's able to keep pace with smaller players on straight line drives thanks to his long strides and intimidate or effectively contest shots at the basket.

He wasn't asked to switch often but has proven when matched up against stretch big men on face-up drives that he can bend his knees to get down in a stance and shuffle his feet laterally to stay in front, so there's potential for that.

But Bagley doesn't have elite reach for someone his height. The Draft Express' archive lists him with only an 6'9 standing reach measured three years ago but given there is no record of him getting taller, it's fair to assume he hasn't gotten longer either. And that figures to be a concern as he moves up through the ranks.

His measurements are out of his control, though. An area that needs improvement and he can work on as his body matures is his strength. Bagley has a lean 225-pound frame in the context of his 6'11 height. As a result, he gets pushed out of deep position in the post and needs to front the post on the other end.

Without any power moves to speak of as of now, Bagley relies on his skill operating from the low block.

He's flashed a face-up jumper off a jab-step and a lefty hook off a jump-stop but for the most part likes to face his defender and attempt driving around him. Bagley has a loose handle and is prone to getting the ball stripped from him in traffic but can go around his man due to his quick first step, maintain his balance through contact and shows some nice touch on non-dunk finishes.

There's plenty of room for refinement, though. Bagley didn't show much diversity to his post game, in terms or shot fakes or a turnaround fadeaway jumper, and he is extremely left-hand dominant. In an instance where Billy Preston forced him to his right in the game against Oak Hill, Bagley still try a left-handed hook, despite the fact his momentum was against his strong hand and Preston wouldn't be able to contest him if he had shot with his right hand.

But Bagley is viewed as a potential star prospect because of the glimpses of perimeter skills he's flashed, which at his combination of size and agility could be difference makers.

He's proven himself able to grab a defensive rebound, take a few dribble and pass ahead to speed up the pace of the game or go end-to-end and drive at his man one-on-one. He even flashed some passing ability, from the post hitting a cutter off a double team in the game against Oak Hill and on a drop-off against Nathan Hale.

Bagley didn't run any pick-and-rolls against a set defense or show the ability to shake his defender side-to-side with dribble moves in these two games, though.

The same dynamic is true of his outside jumper. Bagley spaced out to the three-point line when Cody Riley set a ball-screen or posted up, which suggests he has shown such range in practice, and he hit a smooth looking stop-and-pop corner three-pointer off the bounce as his defender eased up his stance against Oak Hill. He elevates off the floor with decent balance, has decent quickness in his release for someone his size and pretty good touch in his shot.

But other than taking a catch-and-shoot corner three relocating off ball movement against Nathan Hale, Bagley wasn't given the chance to show if he has any versatility to his shot, as he was not put in the pick-and-pop or run off pin down screens, and there is no tangible evidence he is on pace to develop into a real long-range threat in the immediate future, as Bagley hit just 20.9% of his 67 three-point shots and 62.3% of his 199 free throw shots in the EYBL circuit last month.