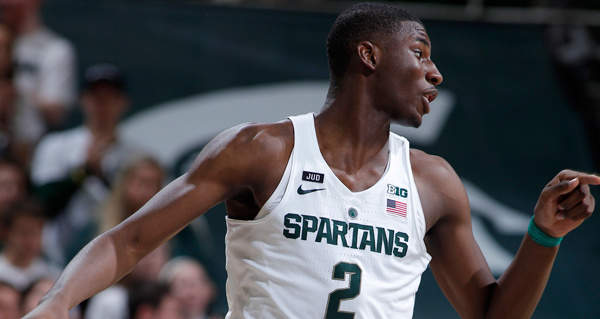 The culture of youth basketball in the United States has changed the dynamics of the NBA’s incoming draft classes. The growth of AAU basketball has brought the top tier of talent together often as they mature. There is a familiarity amongst rookies nowadays that didn’t exist in the pre-LeBron James Era.

We will see three players drafted in the first round from the same Greater Philadelphia AAU program on Thursday night in Mikal Bridges, Lonnie Walker IV and Donte DiVincenzo. A fourth prospect, Penn State guard Tony Carr, was also part of that Team Final program.

“That’s big time. It’s a pretty big deal for the area,” Walker said. “It shows the level of competition that we have on the East Coast.”

Shai Gilgeous-Alexander chose not to test or play any 5-on-5 at the combine in Chicago and that looks to have been a smart decision. His stock has increased over the last month after he rose to prominence with the Kentucky Wildcats.

There are a number of teams looking for a point guard near the top of the draft order and the Canadian could slot right in.

“To be who I am, on and off the court, “ Gilgeous-Alexander said of what teams wanted from him throughout the interview process. “My playmaking, being a guard that’s tall for his size, defending and being a guy that can lead as well. Teams value that and want that.”

The 19-year-old is also aware that he’ll soon be representing a billion-dollar entity.

“Coach [John Calipari] talked about it with us,” he said. “It’s more than just basketball at this level, it’s an image. Organizations have an image as well and you have to represent them in a good way.”

Knox Is Ready To Expand His Game

One of Gilgeous-Alexander’s teammates at Kentucky, Kevin Knox, is ready to spread his wings at the professional level. Famously compared to Jayson Tatum by Calipari, the 6-foot-9, 215-pound wing believes he can exceed his relatively modest freshman numbers -- 15.6 points and 5.4 rebounds on 44.7% shooting.

“In college I was playing off the ball a lot, that was my role and I accepted my role,” Knox said. “This summer I really worked on a lot – ball-handling, pick-and-roll situations. A lot of teams didn’t know I could handle the ball as well as I can. I can make plays and pass the ball, that’s what I’ve been showing in workouts.”

When asked about his meeting with the Knicks, Knox touted his ability to play in a positionless system, which is music to the ears of draftniks far and wide.

“[David Fizdale] said I’m a mismatch problem playing the three because I can take little guys in the post and big guys on the perimeter,” Knox revealed. “He mentioned having me at pretty much every position.”

Ironically enough, Tatum said the same thing last year while referencing the time he spent pre-draft with Brad Stevens and the Celtics. Could Knox be headed to the Knicks?

“It means a lot to me, but I know it means even more to the school and it’s awesome that they can experience something like that that they haven’t,” he said. “The success of the athletic program altogether in the past couple of years, just to add onto that legacy is pretty special.”

The NBA invited 20 prospects to participate in Wednesday’s media availability and sit in the Green Room at the Barclays Center and Hutchinson is the only four-year player.

“It takes an extreme amount of commitment and that’s the decision that I made, committing myself completely to wanting to become an NBA player,” Hutchinson reflected. “After I made that decision, it was really doing whatever it took. That meant putting time in and continuing to get better and obviously the resources that I had being at Boise State and working with some of the best coaches and trainers got me to this point.”

Jaren Jackson Thankful His Father Has Been The Anti-LaVar

Jaren Jackson, Sr. has valuable lessons to impart on his son as a former NBA player, but has never put pressure on Jaren, Jr. to embrace basketball. What a unique concept, LaVar Ball.

“My Dad lets me create my own path. He knows we are traveling different paths even though we are similar,” the younger Jackson said. “Even where I went to school, we had completely different paths. Even how we grew up. He’s told me to enjoy it.”

His father played in more than 400 NBA games as a journeyman guard and started 13 times for the Spurs during their run to the 1999 NBA championship, but Jaren, Jr. is grateful that his Dad never injected himself into the spotlight.

“He never forced me into it. I got the love of the game on my own,” he said. “I did so many activities you wouldn’t believe – singing, all this stuff – but being able to find that love for basketball on my own was definitely good for me.”

It’s increasingly likely that the NBA will change draft eligibility rules within the next few years. Not surprisingly, every prospect I spoke with was in favor of allowing players to jump from high school to the NBA.

“If they so choose. I think once you turn 18 you’re a grown man,” Lonnie Walker said. “There are a lot of kids who don’t go to college or play sports at all and they go straight to working. If high school students feel they should play in the league, then let them get the opportunity to do it. It’s all about self-belief.”

Walker was a McDonald’s All-American and ranked 12th by ESPN in his class, but says that his year at Miami was invaluable and he wouldn’t have passed on a year of college even if the draft rules had been different for him.

“I don’t think it would have changed at all. I’m very decisive on what I want to do and I needed that year regardless,” he said. “I got injured and regardless of that situation, playing at Miami was probably one of the best decisions I’ve made to this day.”

Learning how to navigate the dangers of social media is as much a part of the draft process as choosing the right suit or answering random questions that have nothing to do with basketball.

The NBA does what it can to educate prospects, many of which have been under a microscope for several years, but you can only do so much. Each prospect received a color-coded sheet from the league this week with guidelines, advice and suggestions on how to deal with the press, social media and hangers-on.

“I’ve experienced it, obviously not to this degree,” Marvin Bagley III said. “Growing up you hear a lot of different things, but to me I always say if I’m focused on one thing, and that’s getting better, it’s hard to focus on something else.”

Oddly enough, Bagley has ventured onto the Twitter battlefield. After an ESPN analyst labeled him as selfish following a game against Virginia Tech in February, he fired back by calling the analyst ignorant.

“It’s a lot. You can get caught slipping at any time,” Bagley admitted. “You can be doing something normal and I’ll see pictures on Twitter all the time. Somebody might take a picture and turn it into a joke, just stuff like that. You’ve got to be on guard and be ready for stuff like that.”

Playing In The NBA Is A Lot Like Driving A Car…

When potential draftees are constantly poked and prodded, you have to come up with unique ways to evaluate a player’s talent and mental acumen.

Zhaire Smith says the weirdest question he was asked during the pre-draft process had to do with driving.

“One team asked what I would do at a yellow light,” he said.

So how did he respond?

“I said it depends how fast I’m going,” he recalled. “I might just pass it but if I’m going slow I’d stop.”

That’s a roundabout way of determining whether or not Smith is willing to take risks on the basketball court. I’m not sure if the answer he gave indicates how he’d react if faced with a 2-on-1 fast break on a Tuesday night in Charlotte.