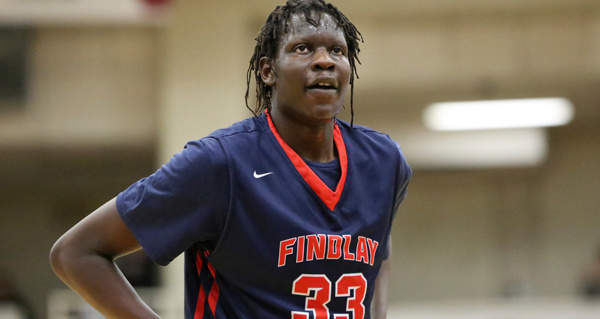 The seven-foot-two center is viewed as a potential unicorn – able to protect the rim on one end and space the floor out to the three-point line on the other.

He’s certainly proven himself as a very impactful shot blocker when well positioned, as Findlay Prep had him hang back close to the basket at all times, but his energy level and physicality leave a lot to be desired at this point of his development. As a result, Bol is not the dominant defensive rebounder his general size suggests he should be, though his positioning consistently secured him healthy numbers.

The 18-year-old [3] is also yet to show he is mobile enough to extend pick-and-roll defense above the foul line, which is rapidly becoming a must for big men at the NBA level, given the growing importance of the pull-up three-pointer.

On the other end, most of his touches came in the post, where he struggled to generate good-looking looks more often than not due to his lack of strength, or in the extended elbow area, where the Oregon commit showed his fondness for face-up isolating against his man. He can look intriguing operating off the dribble every now and again but appears to be a long way away from earning a living doing that.

In the near future, Bol projects as someone who can make an impact as a finisher, second chance creator and eventual pick-and-pop shooter but pretty much all of those look theoretical at this time.

Findlay pretty much never had him rolling down the lane off a ball-screen, his energy in the offensive glass left a lot to be desired as well and he rarely gets his three-pointers up – more often than not putting the ball on the floor to try creating something needlessly more complicated, in part due to the fact his unorthodox release requires him to be wide-open for him to get the ball out.

Within his role of being asked to cover only the immediate area near the basket, Bol proved he can be a tremendous interior defender when well positioned. He is proactive stepping up to the front of the rim and going up off two feet in a split-second is not a chore for him, which combined with his nine-foot-six standing reach [4] makes it really tough for opponents to finish over or around him – recording six blocks in 28 minutes at the 2018 Nike Hoop Summit last April.

Bol has also flashed enough quickness and reaction instincts in instances where he steps up, forces a drop-off pass and then manages to recover back to his man to block or at least effectively challenge a shot by leveraging his impressive second jump and his length.

His other work as a help defender included shadowing isolations and keeping pace with smaller players from the foul line down in drop pick-and-roll defense. He showed decent movement in short areas to be quite effective in these instances at the high school level.

The Khartourn, South Sudan native of American citizenship flashed some intriguing position defense preventing a ball-handler from turning the corner in the “mythical” national championship semifinal game against Montverde Academy but other than that hasn’t yet developed into the sort of big man who knows how to anticipate and cut off dribble penetration regularly.

From a physical standpoint, Bol is hit-and-miss with his boxouts and is quite soft with them when he does put a body someone close by. His general size helps him collect a bunch of uncontested rebounds but his lack of force when engaging with more energetic big men and the fact that he often bites on shot fakes or sells out for blocks keeps him from being considered a reliable presence protecting the glass.

That lack of toughness and stoutness also reflect in iffy defense on the post, where Bol struggled to hold his ground in the couple of times the rugged Charles Bassey lowered his shoulder against him and knocked him back in the Nike Hoop Summit.

He wasn’t asked to venture far into the perimeter at Findlay a whole lot, other than the few minutes when he shared the floor with Connor Vanover (another seven-foot-three behemoth) and had to defend the eventual stretch big men.

Bol puts in the effort to bend his knees to get somewhat down in a stance against these types and impressed with his ability to block jumpers when he was within a step of his man but struggled in pick-and-pop defense – lacking the sort of quickness needed to contain the ball-handler and hustle to closeout to the three-point arc in time to make an impact.

And he flew by on closeouts when he did manage to run a shooter off his shot on spot-ups, exposing the defense behind him as that player put the ball on the floor.

Often flat footed defending off the ball, Bol was also not attentive enough to his responsibilities switching on the fly, as Findlay at times went to a zone when it had both him and Vanover on together.

Findlay mostly looked to get him the ball in the post, where Bol rarely looked good operating with his back to the basket. He doesn’t have a lot of strength in his unevenly-distributed 222-pound frame in the context of his height and doesn’t play with any force trying to set deep position, often getting pushed out towards the mid-post and extended elbow area.

Bol hasn’t developed power moves yet, struggles to knock back his man in order to create space for hooks, doesn’t go to his left hand under any circumstance and doesn’t have great feel for handling double teams.

The most interesting resource he’s shown so far is a turnaround baby jumper leaning into his man to try getting to the foul line.

But what Bol really likes to do is facing up in isolation against his man and this seems to be the most advanced area of his game at this point of his development.

He has a very effective head fake and decent coordination putting the ball on the floor – even flashing a spin move, a scoop finish off a high step on a straight line drive and a running floater.

Bol is prone to having the ball stripped in traffic and can’t maintain his balance or his momentum forward through contact but has shown glimpses of a pull-up jumper, perhaps intriguing the most with how he’s managed to create them – going between the legs into a left-to-right crossover into his pull-up and head-faking into a two-dribble stop-and-pop pull-up.

Bol is not any sort of an efficient shot maker yet, though. His mechanics are quite unorthodox, not just rising up off the dribble but getting shots up off the catch as well and even on free throws. He has a low release, launching the ball from in front of his face, pushing the ball out.

Bol can nail a wide-open three-pointer as the trailer in transition or on spot-ups but struggles the get the ball out quick enough when put in the pick-and-pop. In large part because of mechanics, he has shown to be a very hesitant shooter.

As is, Bol projects to make most of his impact as an energetic presence near the basket but he’s shown limitations as such as well.

He is a poor screener who rarely influences on-ball defenders, has so-so hands catching the ball on the move and can’t finish through contact. That said, Bol should still be an asset as a lob finisher. It’s unclear he is explosive enough to dive hard down the lane and go up in traffic but his decent leaping ability and massive standing reach should guarantee him as an option to at least finish some alley-oops sneaking behind the defense.

On the glass, Bol is not very physical but does try to set inside position from time-to-time, has a seven-foot-six wingspan to rebound outside of his area and a quick second jump to fight for tip-ins or 50-50 balls. His motor has plenty of room to improve, though.

Bol is one of those prospects who is a lot more interesting in theory than in reality at this point of his development.

His physical profile certainly makes him a prospect of interest but he doesn’t seem to play very hard very often and his skill level is so-so at best. Someone his size being able to put the ball on the floor from time-to-time and even crossing over his man sure seems intriguing but is unlikely to be a projectable skill at the pro level and it looks like the odds are against his outside shot.

Players his size without superior athleticism are getting phased out of the NBA, unless they offer some ability to hang in the perimeter in either end and Bol currently doesn’t project to be able to do that. His rim protection will be valued but to which extent will be in the eye of the beholder.

I don’t think it’s out of the question that Bol follows a similar path to guys like Brandon McCoy, Stephen Zimmerman and Kaleb Tarczewski – seven-footers who enter college highly touted but get exposed as not-first round or draftable talent.

On the other hand, if Bol starts bringing in the energy more often, gains some strength and learns how to leverage his frame to act like a deterrent more regularly, he really should end up a lottery pick because the NBA continues to be enamored by seven-footers and every team feels like it needs to have multiple, if not three or four them on the roster, despite the fact going smaller and more versatile has been proven to be far more beneficial.

[4] According to the Stepien, citing measurements at the 2018 Nike Hoop Summit