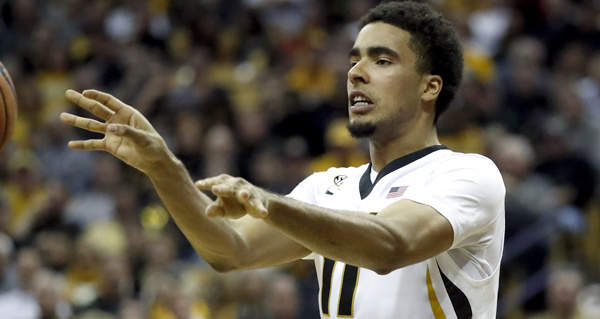 Michael Porter dealt with back problems that limited him to just 53 minutes all season, but Jontay surprised everyone who isn’t very familiar with high school ball. He was not only an impact player right away in college, but a lot of people felt he was good enough to be a one-and-done and get picked in the middle of the first round.

Porter attended the 2018 NBA Combine and rumors surfaced that he was about to sign with an agent and forgo the remainder of his amateur eligibility [2], but Porter opted at the deadline to return to Missouri for his sophomore year – disappointing many draftniks in the process.

The six-foot-11 stretch big really impressed with his skill and intelligence at such a young age. Though he spent a good chunk of his time on the floor with another big man out there, he projects as a pure center in the pros – profiling as a fit for what the league is looking for in its big men on offense these days.

Besides spacing out to the three-point line away from the ball, Porter offers gravity while screening at the point of attack thanks to his ability to take quick catch-and-shoot jumpers out of the pick-and-pop.

Though not in a physically imposing fashion, he can also post up switches and proved to be exceptional at scanning the floor with his back to the basket – firing up crosscourt passes against double teams to create three-pointers for others.

The concerns regard the other end, where the Columbia native figures to struggle defending out in space – at least as he is currently built. Porter weighed in at 236 pounds at the Combine, with 13.6% body fat [8]. Many speculate teams’ doubts over his conditioning are what encouraged him to return to college for a second year.

That is not to say, however, that he can’t defend. Despite showing a lack of lift, Porter was an effective rim protector when well positioned and did very well in the glass – creating events regularly enough to lead the team and rank second in the conference in defensive rating.

Porter spaced out to three-point line regularly as a weak-side spot-up threat – taking 46.2% of his live-ball attempts from beyond the arc. He is also capable of relocating around the perimeter out of ball movement, jog to a spot for three-pointers out of roll-and-replace and, more importantly, set his feet quickly to take long bombs out of the pick-and-pop.

The Nathan Hale alum has a fairly quick trigger for someone his size – with only a quick dip for rhythm and fluid mechanics. He gets more elevation than you often see out of big men and fully extends himself for a high release – getting his shot off comfortably over closeouts.

The lefty nailed 36.4% of his 110 three-point shots, at a pace of 5.4 such attempts per 40 minutes. He looks hesitant to just let it go at times but it’s hard to argue that he is not getting enough high value shots ups. His 75% foul shooting over 104 free throws offers the expectation that he’ll be about as good a shooter in the pros too.

Porter doesn’t leverage his frame to get a deep seal against similarly sized players. More concerning, perhaps, has been his lack of toughness trying to impose his will against smaller guys on switches.

But when he does get the ball entered to him in the mid-post area, Porter has been exceptional at creating shots for others while operating with his back to the basket.

He doesn’t have power moves to back his way into close range layups or any explosiveness going up off two feet for powerful dunks out of a standstill. He’s also struggled to create separation for quick turnaround hooks and his touch on turnaround layup attempts has been so-so at best – as he shot just 60% on 40 shots at the rim last season [9].

But he’s shown to be just about enough of a scoring threat using shot fakes or head fakes to get his man out of position from time-to-time, mixing in a reasonably fluid pivot move, getting turnaround fadeaway jump-shots off and taking no-dribble jumpers off a jab-step on face-ups – hitting 45.5% on his 88 long-twos, with just nine of his 40 such makes assisted.

Thanks to his effectiveness, even if he doesn’t look all that dominant as a post scorer often, Porter has commanded double teams and carved them up – assisting on 19.5% of Missouri’s scores when he was on the floor.

Besides dexterity using an escape dribble against hard doubles, he has excellent court vision firing up crosscourt passes to the opposite wing against a scrambling defense and can ignite passing sequences that end up in high value shots.

He is an asset to initiate ball movement out of the low post but also keep it moving out of the perimeter. Porter is a quick touch passer and consistently makes the extra pass around the horn.

He can also act as a hub to facilitate offense from the high post. Missouri often placed him at the foul line against zones to have him dismantle it from within and sometimes placed him in the elbow extended area, opening up the baseline for backdoor cutters.

More promising for his pro aspirations were the glimpses of being able to pass off the bounce, though. Porter has shown to be coordinated enough to put the ball on the floor off a shot fake against closeouts and kick the ball out off the dribble against a collapsing defense as he got into the lane.

Porter is not an option to play above rim as a target for lobs and rarely rolls hard to the basket off a ball-screen – more often than not looking to roll into a post-up.

He can’t get all the way to the rim off the bounce regularly – lacking an explosive first step, speed with the ball or side-to-side shiftiness. Just 16.8% of his live-ball attempts happened at the basket, though his large frame invites contact and helped him average 5.1 foul shots per 40 minutes.

Due to his role as a floor-spacer and a shot creator out of the post, Porter was rarely in position to crash the glass – collecting just 7.7% of Missouri’s misses when he was in the game.

But on top of his positioning on the court, Porter also lacks the explosive leaping ability to out-jump opponents chasing the ball off the rim and has only a seven-foot wingspan, which doesn’t help him rebound out of his area consistently.

And when he did manage to create the eventual second chance opportunity, Porter showed not to have a quick second jump or explosiveness to go back up strong in a crowd.

He did very well defending close to the basket.

Porter was attentive to his responsibilities stepping up to the front of the rim acting as the last line of defense and impressed with his IQ shadowing isolations.

Porter played stout post defense and used his reach well making plays on the ball for strips – averaging 1.4 steals per 40 minutes, which is a good mark for a center.

He was also attentive to his boxout responsibilities and though he wasn’t all that impressive chasing the ball off the rim, his big rebounding area guaranteed him very good production protecting the glass, as he collected 23.1% of opponents’ misses when he was on the floor.

Porter can be surprisingly nimble in tight spaces – doubling a mismatch in the post and recovering back to his man in quick enough fashion to relieve his helper to close back to the perimeter.

But he struggled when asked to make long rotations coming off the weak-side in help-defense, often getting there a split-second late and putting himself at risk of fouling, especially as he was prone of biting on shot fakes as well – averaging 4.8 personal fouls per 40 minutes, which is part of why he was limited to just 24.5 minutes per game.

In pick-and-roll defense, Porter can stop the ball when asked to drop back, keep pace from the foul line down as ball-handlers get downhill and puts in the effort to contest elbow pull-ups.

He doesn’t seem suited to venture above the foul line, though.

Porter wasn’t very quick blitzing at the three-point line and recovering back to the roll man in a way that doesn’t expose the scheme behind him. He is also not an asset to pick smaller players on switches.

Porter bends his knees to get down in a stance and has a couple of fluid lateral slides in him out in space but struggles with shiftier types who can break him down side-to-side.

As he spent some of his time on the court with another center out there, Porter stuck closer to the perimeter against opposing stretch big men from time-to-time. He contested outside shots well and even flashed some ability to block three-pointers in impressive fashion, which was also seen as he hustled in pick-and-pop defense, but was blown by on closeouts more than a few times.

[2] According to Sports’ Illustrated Jeremy Woo

[5] According to our stats’ database

[7] According to Ken Pomeroy