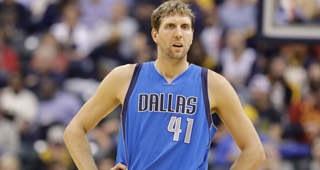 To understand what has made Dirk Nowitzki one of the best players in the history of basketball is to acknowledge his best attributes in a matter of cascading degrees. There’s a transitive quality to why he’s the second best power forward of all time.

It starts with the two most essential and obvious traits: He is seven feet tall and can shoot three-pointers. These two qualities explain his influence on the game, but taken alone, they don’t do justice to his effectiveness. I say that because Kristaps Porzingis is seven feet tall and can shoot three-pointers, as can quite a few other players at this height in 2018. And Porzingis is a more athletic player than Nowitzki, so to focus on those simple facts would be to assume that the game has evolved and created a more effective version of him.

But the next degree to acknowledge is that Nowitzki’s shooting ability has no business being compared to the shot of other power forwards. He shares a tier with Steph Curry, Klay Thompson and Ray Allen. More than a seven footer that can shoot, he’s one of the best shooters of all-time, full stop. And he’s seven feet tall.

Competency in something usually not offered by players at his position is extremely valuable. Excellency in that thing changes the dynamics of every game that player is in. Nowitzki’s complete proficiency at shooting is like if Ben Simmons became the best rim protector in the NBA. It’s something constantly present in the game even when it is not literally happening. The defensive team effort it would take just to make Nowitzki’s shot anything less than a sure two points required abandoning the kind of attention required to normally defend five NBA players.

When you factor in his eventual mastering of how to operate perfectly in the pick-and-roll /pop and you’ve run into a degree of gravity and spacing that opens up the game for his teammates, even the ones whose talent levels didn’t approach his. We’ve seen J.J. Barea, Monta Ellis, Tyson Chandler, Jason Terry, late-career Jason Kidd, Samuel Dalembert, Josh Howard, Adrian Griffin, Devin Harris, and Rodrigue Beaubois taken to the playoffs alongside Nowitzki. A few of them were hand-gifted production by him when they barely belonged in the league, but all of them were the beneficiaries of sharing the court with a threat that was the focus of the defense’s attention every second of the shot clock.

That’s all a wordy way of saying Nowitzki has made scoring easier for his teammates for a long time. But from ages 36-40, that approach has been relatively inconsequential. We’ve still seen examples of it every game, but he’s naturally more than a few steps slower, and being a complete non-threat as an off-the-dribble player caps his effectiveness as an offensive focal point. His game had always been about degrees, and for the past half-decade a few of those degrees have been shaved off. Combine that with how comically bad his defense has become in that time, and he clearly hasn’t been able to drag teams to the playoffs.

So yes, Nowitzki’s threat as a shooter has been the staple of the Mavericks’ offensive identity for two decades. It is not, however, the only way to create spacing on a basketball court. It just happens to be the uniquely effective one the Dallas franchise was gifted when Nowitzki hit his prime.

In lieu of a player like Nowitzki, teams have made due with their own unique rosters of talent. The guard-focused pick-and-roll perfected by James Harden has become the run-pass option of the NBA. It’s something that European rookie Luka Doncic’s attributes look to be extremely compatible with. In Europe, Doncic used picks, reacted to defensive decisions, got to the rim and displayed uncanny passing skills.

The rim running lob threat is another space creator. When you have someone with the right combination of size, strength and explosiveness, then the only way to prevent such easy baskets is to allow for space elsewhere. DeAndre Jordan has proven to have that combination. Vertical spacing has to be accounted for.

Likewise, just as there are other effective focal points to an offense than what Nowitzki has long provided, there are also other roles for Nowitzki to play besides offensive focal point. He can be a complementary player. His potential in this role is so theoretically high that it’s a shame he wasn’t able to transition into it four years ago.

That’s ultimately what will make the development of Doncic and Dennis Smith, and the fit of Jordan, so interesting this season. It’s a lot to ask of those players and Harrison Barnes to immediately create offensive cohesion. It might be beyond their potential. But the possibility is there, and what would result is a world where Nowitzki is not creating space. It would be a world where space is created for him to be the beneficiary of. It’s hard to imagine a player more capable of cashing in on a defense that doesn’t treat him like a number one priority. He could score 17 points in 14 minutes. He could shoot 60 percent from the field.

It all depends on the players around him. If only this roster were coming together when Nowitzki was in his 15th or 16th year. Either way, Nowitzki is set to have by far the best 21st season anyone has ever had in the NBA.