Even The NBA's Strong Are Fragile 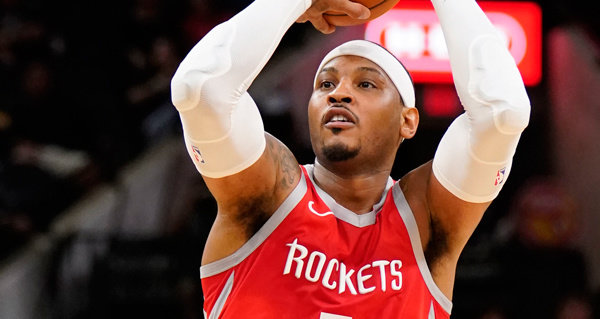 The Houston Rockets were glowing with optimism during each and every interview conducted during their NBA Media Day obligations. And why wouldn’t they be? A team so close to the Promised Land with a core returning for more had every right to be. Even the idea of bringing in Carmelo Anthony was not only welcomed, but celebrated in the organization, despite the outside presence of raised eyebrows in the wake of the departures of players like Trevor Ariza and others.

Who knew it would take less than one month of the NBA regular season for said eyebrows to be correct — as it stands now, at least.

At 6-7, the Rockets, the top overall seed last season, sit 12th in the Western Conference. What’s even worse is the fact they’re currently sitting 22nd and 24th in the league in offensive rating and true-shooting percentage, respectively. That kind of backward leap, even without any sort of drama, tends to set the media tornado in motion.

Whatever is happening in Houston regarding the longtime veteran and surefire Hall-of-Famer, it’s not good. The Rockets came out publicly and made their case last Sunday before their 115-103 win over the Indiana Pacers that Anthony was doing anything and everything they’d asked of him. Teammates backed him and his commitment. But all of it — in the hallway interviews and in the locker room — felt palpably forced, and there are plenty of credible and knowledgeable journalists who can lend further information on that front.

So, therein lies the meat of all this: There is basically no evidence Anthony has made Houston better — to this point, at least. The on/off numbers are fairly staggering.

There is literally no category on this chart that shows the Rockets are better when ‘Melo is on the floor. This all seems fairly harsh, considering he’s only been a member of the team for 10 games (the team has played 13 games total), but here we are. When the smoke flares up, the fire tends to follow.

To add to the drama, the Rockets have just completed their best two-game stretch of the season with wins over the Pacers and Denver Nuggets. And yes, it’s only two games, but they’ve scored nearly 119 points per 100 possessions and outscored opponents by 12.2 points per 100 possessions in the same sample. Any responsible human being would look at these numbers and be very careful about how they translate, but considering the circumstances surrounding the team, the aforementioned eyebrows are surely being raised once again.

Oh, and by the way, here come the Warriors. Golden State will be in Houston on Thursday night, rife with their own apparent internal struggles. It’s weird we’re here: the general consensus to start the season was the Rockets and Warriors were the two best teams in the league (there may have been some quibbles about Houston, to be fair), and here they are dealing with what seem to be fairly serious internal issues. (The disease of me, indeed, Pat Riley.)

And yet, nobody would blink or feign surprise or outrage over this being called a Western Conference Finals preview. Oh, how wonderfully volatile this league is. Whatever is happening in Houston, I doubt many people view it as crippling or more than a bump in the road; whatever is happening in Golden State, LOL, see you (whoever it might be) in June.

But for now — and it’s one of the greatest and most profitable elements of this league, that we can be enthralled with the “for now” in November when we almost assuredly know what the outcome of the season will be — we invest in this matchup and wait for what transpires next.

What happens with Melo and will he ever be able to find a decent fit on a contending team before his career ends? Where does the power struggle begin and end in Golden State? We’ll have to wait and wonder, but for now we have this game. The timing is pretty perfect: “Give us two of the league’s best teams that just so happen to both be mired in controversy.” Done.

Golden State and Houston will be players in the end. They’re far too talented. But what this game spotlights specifically is the fragility of an organization and what can befall it when even one different player, coach or front-office member is introduced to the fold. It’s what makes the longevity of certain organizations around sports so astounding.

Stephen Curry won't be playing in Houston on Thursday, but Draymond Green and Kevin Durant’s beef will be; Anthony almost assuredly won’t be anywhere near the floor, but we’ll still get the show.

Love the NBA “for now,” because it gives you this. And without fail, it will only get better from here.