Steph, Kyrie And Their Contributions To The Crumbling Of Reality 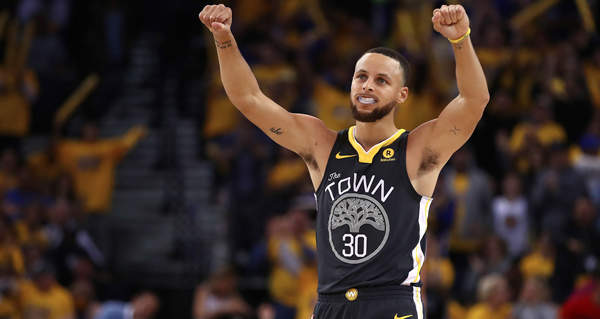 “Steph Curry says he doesn’t believe in the moon, it’s on CNN and they say we’re just jocks, we’re just athletes but it’s on your channel. We’re [thinkers] but you don’t want us to be that, so whomever you is, I don’t know what that mold is.” — Kyrie Irving, on Steph’s moon landing trutherism

“The poverty in the city is so hellish, just look across the street [from Chicago Stadium]. Then you have us playing in here—how much money did we make here last night? How many lives will it change?” — Craig Hodges, the day after Game 1 of the 1992 NBA Finals

Sincerity is already impossible. You make eight figures, you live inside our screens. People collect decent salaries of their own to follow you around and record what you say, speculate on what you think. The team kisses your ass because they want you to stick around and fill the arena. The shoe company does the same because you’re a highly valuable pitchman. You terrify and delight crowds of 18,000 every other night. You’re one of the very best basketball players alive, the product of your own work and talent. You’re an object, malformed by nonstop social attention, trying to live like a person. Your feet don’t ever stop moving. The world talks about you in your sleep.

You’re alienated, through no fault of your own. What does it mean to be successful? Big house, big profile. Maybe it means you become unmoored from reality—a little or a lot.

We’re not far removed from an era in which athletes were treated almost exclusively like dum-dums, malcontents, and spoiled adolescents. When Alex Rodriguez signed an extraordinary-for-the-time $252 million contract with the Texas Rangers in 2000, opposing fans showed up to the ballpark with signs that attacked his alleged greed and entitlement. Columnists and water-carrying journos posited that his mega-deal might, all by itself, create a work stoppage in Major League Baseball. Nobody scrutinized Tom Hicks, the now-former Rangers owner, who made his fortune as a high-functioning parasite in the leveraged buyout business, or argued that all A-Rod did was play the market, same as Hicks had, except more honestly.

When NBA players in the early-to-mid aughts outfitted themselves in gaudy chains and XXL throwbacks, as was the style at the time, the league drafted a rule that forced them to dress more like accountants than ballplayers, so as not to offend the sensibilities of their corporate partners and some dubiously extant strata of NBA fans who thought Jay-Z was a crime lord. In response to player complaints, David Stern went high-paternal: “if they are really going to have a problem, they will have to make a decision about how they want to spend their adult life in terms of playing in the NBA or not.” The fine Columbia grad taught those hellions upon whom the entire league’s wealth is built a thing or two about decorum.

When Serena Williams, bothered by persistent leg injuries and lacking the requisite focus to rack up grand slam titles like she knew she could, took an eight-month sabbatical that stretched into March of 2004, the tennis world all but locked the gate behind her. Serena spent some time acting and modeling, attending the NBA All-Star Game and the VMAs. She mentioned she might want to design clothes at some point in the future. Upon her return to the court, a vocal contingent of tennis’s (notably lily-white) establishment openly rooted for her to fail, as a kind of comeuppance for having the gall to take a breather from a game with a notoriously high burnout rate. Fellow competitor Jelena Dokic, as Serena was beginning her comeback: "That story is over. I don't even hear comments about Serena anymore." Of course, it turns out Serena knew how to look after herself just fine, thanks. She won the 2005 Australian Open and has spent the past 13 years on the most dominant run the sport has ever seen.

It’s not a perfectly tolerant world. The sporting discourse still contains nauseating levels of bad faith, coded racism and sexism, and anti-labor sentiment. But we take athletes more seriously these days, afford them more room to be themselves. If the NFL doesn’t grasp (or just willfully misunderstands) what Colin Kaepernick and Malcolm Jenkins are fighting for, at least a sizable portion of media and fans do. DeMar DeRozan and Kevin Love talk about their struggles with depression and are properly commended for their candor. Russell Westbrook talks fashion and it gets printed in the New Yorker. The Players’ Tribune is functionally a public relations tool, but it does make news, occasionally generating waves as tall as any Sports Illustrated story or ESPN report.

This is, broadly speaking, a positive thing. To be high-minded about it, greater sympathy with athletes enriches their humanity and ours. It’s always good to try to understand another person. Less importantly, it’s thrilling to share in J.R. Smith’s elation as he parties with his shirt off for two days straight.

I have very little time for Kyrie Irving, or any other athlete trying to be Joe Rogan with a jump shot. It’s exhausting, all the brain genius nonsense he spouts. You can be an awesome basketball player and an intellectual. (Kareem Abdul-Jabbar has proven that many times over.) But you can’t star in a feature-length Pepsi commercial and be a subversive. If Kyrie really wants to be the mind-liberating force he thinks he is, or at least live authentically batty, he’s going to have to tear up a lot of contracts first.

Obviously, he won’t do that. Because his conspiratorial, vaguely hippie-ish outlook is a branding exercise. I don’t know how much of it he comes by honestly. His Flat Earth theorizing felt, as daze slow-dripped through the public and all of Kyrie’s subsequent comments about it were interrupted by giggles, like a cry for attention more than anything else.

But whatever, litigating this stuff is pointless. The reason it matters—and the reason Steph Curry’s moon landing comments are worth talking about at all—is that reality is crumbling. It turns out what unmoors society and makes it even more difficult than it already was to communicate with each other and basically agree on what kind of world we’re living in is not postmodernity but just a bunch of people lying all the time. The 24-hour news cycle and our insatiable hunger for information—well-researched or half-overheard, maybe just flat out wrong—means we suck down a lot of stuff that’s not true, or it’s true but needs more context than we make time to process, and so we’re walking around knowing one-eighth of 20 different stories.

Donald Trump has preyed on this weakness, perhaps totally by accident, with the expertise of a cynic many times more intelligent than he actually is. Though American presidency has always exuded a robust mendaciousness, Trump is by several degrees the most flagrant and prolific liar to ever occupy the office, and it’s driving us crazy. But the Big Wet Prez isn’t the only problem. We’re being gaslit in every direction. Propaganda machines get treated like news organizations. Hoaxes spread with alarming speed. Eliza flippin’ Dushku is out here telling horror stories about her working like and her colleagues sell her out like: I dunno, that guy you say is a nightmare was always really nice to me.

It’s crucial, or a least sanity-preserving, in times like these, to agree that certain things have happened. So when Steph Curry says he doesn’t think we landed on the moon, and Kyrie backs him up, it is, on its own, just two famous people saying stupid stuff, but it also contributes to this larger societal problem where our minds are all turning to soup. It’s not cute; it’s not interesting or forward-thinking. At best, it’s intensely annoying, and in 2018, you have a moral responsibility, if you’re not an idiot, to not act like one. Idiocy is dangerous precisely because people don’t take it seriously, right up until, say the most powerful country on this spheroid Earth is being run by idiots—deeply malignant ones, who spend their every waking hour settling scores and dishing out pain.

Craig Hodges might very well have been blackballed by the NBA. (He certainly thinks that’s the case.) The 1992 Finals constitute the last games he ever played in the league. He argued that black people don’t get a fair shake, that poor people are treated like lepers in America. He showed up to the Bulls’ White House appearance in a dashiki and handed George H.W. Bush a handwritten letter that said as much. He criticized Michael Jordan for not doing enough to advocate for and aid the historically disenfranchised. He was right to do all of this. But he also annoyed management and some of his teammates with it. At his career’s end, he was a 32-year-old guard who didn’t play defense. You make your own decision as to whether the NBA collusively gave him the cold shoulder or he simply aged out of the league.

Craig Hodges took a risk in speaking his mind. He was expendable in a way Steph Curry and Kyrie Irving are not. Those guys would have to commit a felony or argue for a genocide in order for any NBA team to think twice about employing them. They’re insulated; they’re safe. And because we pay more credence to what athletes say these days than ever before, what they have to say matters.

This is, broadly speaking, a positive thing, but sometimes it isn’t. Sometimes we wish to hell they’d shut up, these blinkered rich dudes with no skin in the game, who don’t know what they’re talking about, muddying the waters, tediously furthering conversations that don’t need furthering, doubling down, testing our patience, making everything a little bit dumber.

A common refrain from athletes who get shouted down, which you can hear echoes of in Kyrie’s comments, is that we want them to say what they believe—be good copy, in other words—until we don’t anymore. That’s true, to an extent. But more than anything we want them to have a point worth considering, whether it’s about systemic racism, a movie they watched last week, or the team’s fourth quarter defense.

What I get from two NBA stars engaging with the most tired coke party claptrap in the book is that society is bleak and fractious and confused, and they think that’s kind of rad. They deserve all the ridicule they get for acting that way. That’s not condescension or silencing them or treating them like dumb jocks. It’s actually a form of respect.