The Ballad Of Boogie Cousins 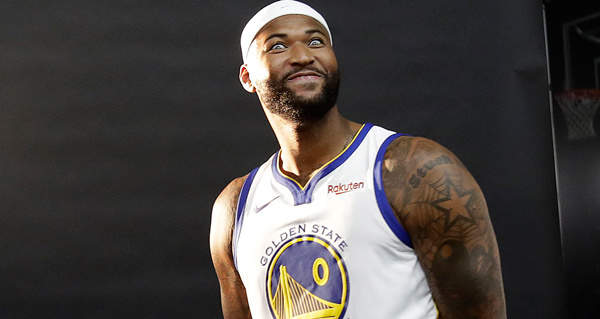 When DeMarcus Cousins went down with an Achilles injury on January 26, 2018 against the Houston Rockets, he was playing perhaps the best basketball of his career. If not that, it was at least his most domineering and awe-inspiring. In 48 games, Cousins accumulated averages of over 25 points, 12 rebounds, and 5 assists per game, along with a handful of steals and blocks, all while shooting better than ever before. Prior to last year, only two players in NBA history had averaged 25, 12, and 5 for a full season, and both of them won MVP.

At the time of his injury, Cousins was blending power and grace in a way that few players have ever been able to, bowling over opponents in the post and maneuvering around them on the perimeter with equal ability. There was something strangely beautiful about seeing a man of his massive size moving like he’d taken ballet lessons over the offseason. He was taking over the game in every way imaginable — seemingly everywhere on the court, able to do anything at all, playing with a passion and a determined fury that, along with his all encompassing abilities, set him apart from his peers. But then, when he fell after fighting for a rebound with Trevor Ariza, talk of his skill dissipated as questions of whether he could ever approach such heights again filled the air instead.

Despite his apparent abilities and accolades, Cousins’ reputation suffered early in his career from an unfortunate habit by NBA fans and commentators to rely on the theory of the Great Man. This outdated idea claims that history can be largely explained by the actions of outstanding and influential men who shape their times, which makes a certain amount of sense as long as you don’t think about it for more than ten consecutive seconds. Once you reach that eleventh second, though, you’re bound to remember the importance of historical context and the societal environments that influence these purportedly great men, men who are shaped by their culture long before they are able to shape it themselves.

Yet we still see NBA championships and team success as being the result of one great player’s efforts. There’s an implicit belief here that if you placed any great player in any bad situation, they could transform it through sheer force of will and ability — a belief that decades of NBA history calls into question. In the last decade, few players have been hurt by this idea more than Cousins. He was drafted by the Sacramento Kings in 2010, a notoriously hapless franchise whose recent success even now seems more accidental than planned. During his tenure there, he was constantly surrounded by marginal players trying to stay in the league and young prospects who almost uniformly failed to pan out. In the four years after drafting Cousins, the Kings acquired Jimmer Fredette, Thomas Robinson, Ben McLemore, and Nik Stauskas on consecutive draft nights, which is not an ideal sequence of events. Even when they drafted Isaiah Thomas with the last pick of the 2011 Draft, they managed to inexplicably trade him after just three years. Yet with Cousins being the undisputed best player on the Kings roster, the responsibility for the team’s failings was assigned to him, even as none of his teammates made an All-Star team and constant turnover in the front office led to him playing for six coaches in less than seven seasons.

While in Sacramento, Cousins was not just seen as a failure for not being able to take the Kings to the playoffs — he was also seen as a malcontent, a surly man whose emotions were always one bad call away from boiling over. He was spoken of as if there was an inherent flaw within him, some personal defect that would keep him from ever being on a team that would experience success. Of course, much of this was vaguely racist nonsense, dog whistle stuff about how black men should handle themselves, drivel that was undercut by just how kind and generous Cousins showed himself to be off the court time and time again. Over the past few years, he has donated tons of money to various charities, helped build a basketball facility in his hometown of Mobile, Alabama, worked to provide free eye exams for people in Sacramento, and paid for the funeral of a young man shot by police. In 2017, he was deservedly awarded the NBA Cares Community Assist Award, and as these acts of generosity have become more well known, the perception of him has shifted a bit. Boogie quit being seen as tempestuous, but passionate, not a failure, but a man who was placed in an untenable situation. The great man theory persists, but an exception had been made.

Now, Cousins is finally on a title contender, due to a weird confluence of bad timing and bad luck. This summer, when he entered free agency, there was less of a market for him than initially expected as teams were reluctant to offer him any sort of long term contract considering that he was recovering from an injury that has derailed the careers of many before him. None of the few teams with available cap space decided to take such a risk, allowing the Warriors — a team that can afford to take a risk like few in recent history — to swoop in.

Though they have looked only intermittently impressive so far this year, the Golden State Warriors remain the presumptive favorites to win the NBA Championship this summer. They still have two of the best players in the NBA alongside Klay Thompson and Draymond Green, to say nothing of Cousins’ now imminent return. However, it remains unclear both what Cousins will be capable of as he returns from injury and what exactly his role will be as a member of the Warriors. For the first time in his career, Cousins will be expected to be a supporting player as he was the lone star in Sacramento and shared star billing with Anthony Davis in New Orleans. While he has greatly expanded his skill set since entering the league, his bruising style, on the surface, appears contrary to the style the Warriors have developed since Steve Kerr’s arrival as coach.

However, the question of fit seems a bit overblown. Last year, the Pelicans had the fastest pace in the NBA, showing that Cousins can succeed at high speed, and while he still likes to work in the paint, he has expanded his range so much that calling him the third Splash Brother is at least a tiny bit more than a silly joke. The big question is less one of stylistic fit than the logistical one of how the Warriors will adjust to adding a fifth star to the starting line-up, and if a team that prides itself on professional equanimity can handle two personalities as explosive as Cousins and Green. In the NBA, though, talent tends to win out and this Warriors team has five All-NBA players in their starting lineup and that’s something no other team can claim.

In recent years, especially as he has recovered from his injury, Cousins has shed the image placed upon him when he entered the league, becoming beloved by many. Without him on the court, there has been time to reflect on his abilities and his person apart from the nightly box scores, allowing him to be seen as a player who wasted away on bad teams and was then unfortunately unhealthy on a good one. And Cousins, in the last few years, has seemed to let his proverbial hair down, showing himself to be a genuinely likable and goofy guy who cares about the community and having fun even as he dominates opponents on the court. He’s a man as comfortable backing someone down in the low post as he is exchanging playful butt slaps mid-game with Joel Embiid or rolling around Barcelona on a scooter. Having said all that, it’s not him who has changed as much as our perceptions of him, as many realized the conventional narratives placed upon him didn’t really apply. He now single-handedly provides a reason for fans otherwise tired of Golden State’s dominance to cheer for the Warriors, adding a patina of fun and joy to their seemingly inevitable Finals triumph. If the Warriors are going to win another championship, well, at least it means Boogie will experience sustained playoff success for the first time, while starting on a title-winning team. It’s not a redemption tour as Cousins has done nothing he needs to atone for, but it is a comeback story worth celebrating, one that is likely to give one of the league’s most distinct players a triumph worthy of his talents.