From Warehouse To NBA Arenas, Kevin Huerter Keeps Up With His Shooting 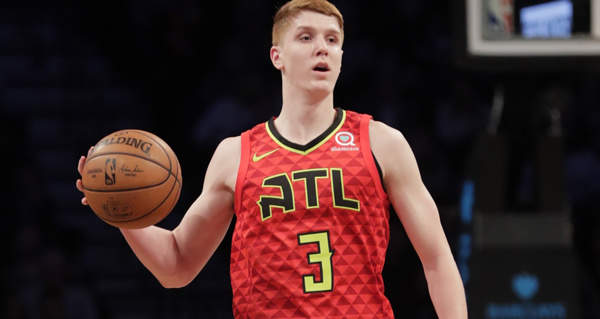 A couple of months ago, after an Atlanta Hawks practice, Kevin Huerter whipped out his phone. He swiped the screen, looking for his bank account, checking to see how much he had. When the app opened, his eyes widened.

The 20-year-old rookie guard out of Maryland had been enjoying life in the NBA to the point he forgot he was going to be paid. Huerter appreciated this moment like he has appreciated every other in the league he grew up watching.

Huerter has played in 54 games entering the All-Star break, proving himself alongside fellow young prospects Trae Young and John Collins as the Hawks attempt to rebuild the franchise.

He’s also been one of the best shooters in the entire league.

At 6-foot-7, Huerter — nicknamed “Red Mamba” after his hair color and silky stroke — has shot the basketball with the best of them this season. It hasn’t always come easy, though.

“There’s been a lot of changes in just figuring out this whole new lifestyle,” Huerter told RealGM. “One of the most annoying parts honestly is (when) we’re on a road trip — packing up and going from hotel to hotel; all the bags you have to pack and bring.”

Sometimes on road trips, Huerter catches up on sleep. Other times, he enjoys times with teammates like NBA veteran and legend Vince Carter. A couple of weeks ago, teammate Justin Anderson and Huerter were sitting in the locker room, speaking to Carter about his famed dunk contest performance.

“Did you practice for that?” Anderson asked. “What was going through your head?”

“A lot of it was adrenaline,” Carter responded.

Anderson then asked about the arm-in-the-rim dunk.

“You can look on the film, but I’m rubbing my elbow,” Carter said, “knowing that was about to hurt really bad. I woke up the next day, and my entire arm was really bruised.”

It’s cliche, Huerter knows, but he often finds himself simply smiling in moments like those, smiling as he thinks about the past. Huerter learned the game from his father, Tom, who owns Huersch Marketing Group in Upstate New York. Huersch had a warehouse, and as Kevin grew older and his jumpshot began to graze the net, Tom decided to install a halfcourt with a Goalrilla basketball hoop at the warehouse.

Huerter hoisted shots at the warehouse late at night, refining the stroke that earned him a spot on the Shenendehowa High School team. There, he scored 1,454 points, tallied 504 rebounds and 512 assists in four years. He earned 2016 New York Mr. Basketball. He earned a spot USA Basketball men’s under-19 World Cup team.

He earned a scholarship offer from the University of Maryland, where he started all 33 games and averaged 9.3 points per game.

Huerter’s upside led to a decision to enter the 2019 NBA Draft. The Atlanta Hawks selected him with the No. 19 pick, pairing him with Young and Collins and first-year coach Lloyd Pierce. Thus far, it’s been nearly a perfect fit, Huerter said.

“There’s been so many times where you stop and you look around,” Huerter said, “and you realize you’re on an NBA court in an NBA arena playing in the NBA.”

One of those times occurred January 11th in Philadelphia against the 76ers. Huerter entered the game having scored double digits in five straight games. He was motivated on this night, too, especially because his parents were in town.

He felt it early, draining from each wing. In the third quarter, with Atlanta down 61-58, Huerter caught the ball at the top of the key. He dribbled left and stopped. Teammate Dewayne Dedmon slid over to sit a screen to his right. Huerter rejected it. He crossed the ball over back to his left and hoisted a deep 3-pointer.

Pierce directed the Hawks to find Huerter in the fourth, and they did. He continued to knock down the shots he’s knocked down all season, scoring a career-high 29 points, and the Hawks won the game on a Collins stepback.

The morning after, Huerter was not annoyed as he packed his bags. He was overjoyed.

In his phone conversation with RealGM, Huerter said he knows he has to get stronger to compete defensively in the NBA. He knows improve his ability to put the basketball on the floor and attack the basket in the second half of the year and beyond to continue to be able to whip out his phone and swipe his bank account app to see more and more paychecks.

“That’s always something I keep up with,” Huerter said, chuckling.

Alec Lewis is a contributor at RealGM.