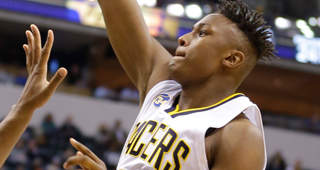 It’s early December and the Indiana Pacers are hosting the Washington Wizards. It’s the sort of ho-hum game on the calendar that makes the NBA’s 82-game schedule a slog. The Pacers are in the midst of five games in eight days, bookended by road contests. It’s a game the Pacers should win, and they will, but in the final minutes the outcome remains in question.

Kelly Oubre (traded a week later) beats Bojan Bogdanovic off the dribble and finds himself alone on a drive into the paint. He goes up for a floater and is met by the right arm of Myles Turner. The block turns into a three-pointer by Darren Collison, which pushes Indiana’s lead to four. A few possessions later, Turner flashes inside before retreating to the right elbow. He’s fed by Collison and drains a jumper that puts the game away. The fourth-year center finishes with 26 points, 12 rebounds and five blocks.

It was the kind of performance the Pacers envisioned when they drafted Turner with the 11th overall back in 2015, and how he saw himself playing when he logged countless hours in the gym. A high-ceiling prospect who played just one season at Texas, Turner has fully evolved into one of the NBA's archetypal modern big man.

After attempting just 14 threes as a rookie, he’s on pace for more than 175 attempts this season. He averaged 1.5 attempts in October and November, but is up to 3.4 per game this month. As he’s stretched out on the offensive end, he continues to anchor the paint as one of the best interior defenders in the league. Turner leads the NBA in blocks per game (2.7) and block percentage (8.7). He’s had six games with five or more rejections. His offseason workouts, however, have helped make him a much more complete defender.

“I feel lighter on my feet and able to defend the perimeter a lot better than I was in the past,” Turner said. “I feel stronger in my base and like my stamina has increased.”

The Pacers have a strong history of elite defensive big men – Jermaine O’Neal, Roy Hibbert – that have worked under the tutelage of an assistant coach that has been with the franchise for two decades. Turner is the just latest to draw from both Indiana’s staff and his basketball past to craft a tough-minded mentality.

“Coach Dan Burke has been huge in my defensive development over the years,” Turner said. “When I first got in the league I barely knew how to properly maneuver within a shell drill and he’s helped me with my perimeter defense a lot. Outside the organization, I had a high school teammate named Joshua Brown or J.B. for short. He was a 5’5” guard with the heart of lion wanted to guard every team’s best player. He would pick you up full court and never took days off. His relentlessness rubbed off on me and I get my intensity from him.”

All of that translates to true contention for Defensive Player of the Year honors and a spot on the All-Defensive Team; something Turner says has been a personal goal since he entered the league. Only the Milwaukee Bucks (103.4) have a better defensive team rating than the Pacers (104.1) and Turner ranks third among all players in individual defensive rating, defensive win shares and defensive plus/minus.

“It feels great to have the recognition for something that’s so underappreciated in our modern game,” Turner told RealGM. “The recognition isn’t what drives me though. Helping my team stack up in the win column is all that matters to me.”

Turner has done that plenty this year. The Pacers have the fifth-best record in the league and are 8-1 in the month of February. Indiana is 10-1 when Turner scores 18 or more points and has lost just once when he makes at least three threes. His play has allowed the team to endure the loss of All-Star guard Victor Oladipo, who has appeared in just 36 games. After struggling mightily in games Oladipo missed in 2017-18, the Pacers are 14-9 without him and won twice when he logged 10 or fewer minutes.

“My role hasn’t changed much at all from what it was at the beginning of the season. I’m still our team’s best defender, especially in the interior, and offensively I’m still a go-to option,” Turner said. “I am being more aggressive with my perimeter shooting.”

What he has continually provided the Pacers is a hard-nosed approach, often quite literally. Turner put up 20 points, eight rebounds and four blocks despite breaking his nose in a collision with John Collins during a New Year’s Eve win over the Atlanta Hawks. He wore a protective mask for seven weeks before being cleared to play without it over the All-Star break. It didn’t seem to bother him much as he shot 44.6 percent on threes with the accessory.

“Masked Myles” may be a thing of the past, but Turner is here to stay as a franchise cornerstone for the Pacers and one of NBA’s best modern big men.