Nikola Vucevic And What Makes A Good Player A Star 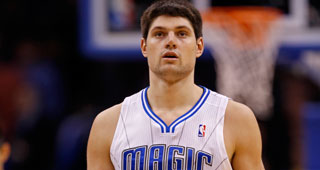 Nearly seven years later, we can see that no one really won the massive four-team Dwight Howard trade. All of the general managers have either been fired (Mitch Kupchak, Rob Hennigan, Tony DiLeo) or have long moved on (Masai Ujiri).

The Lakers failed to win a playoff game that year with Howard, and have yet to return to the postseason.

Andrew Bynum never suited up for the 76ers.

Andre Iguodala left the Nuggets for the Warriors after one season where the team lost in the first round to the aforementioned Warriors.

The Magic have not made the playoffs in the post-Dwight era. Despite their lack of team success, though, the Magic have on their roster the man who is now easily the best player from that trade: Nikola Vucevic, who has developed into an All-Star, though one who despite his on-court success is as anonymous of a star as one can be in today’s NBA.

Despite being an All-Star this season, Vucevic is far from a household name. Some of this has to do with the fact that, ever since joining the Magic after his rookie season, he has been the best player on a team going nowhere. They could potentially make the playoffs this year, but even that seems unlikely, and any playoff berth would likely only result in a quick first-round exit. There’s an often stated belief that true stars prove their mettle in the crucible of high stakes match-ups, of playoff battles where only the strongest survive, so how can a player such as Vucevic show himself to be a star when basically every game he has played, due to his team situation, just has not mattered that much?

The Magic are undoubtedly better with Vucevic than they would be without him. He’s the team’s first All-Star since Dwight Howard in 2012, and easily their most reliable and efficient scorer. The problem for him, and for other great players on struggling teams such as Karl-Anthony Towns and Anthony Davis, is an absence of capable supporting pieces who work well collectively coupled with the presence of a front office seemingly unable to put together a team that makes any kind of sense. Also, it does not seem like a coincidence though that Towns, Davis and Vucevic are all big men who have to rely on others to deliver them the ball. All can score well, and create their own shot opportunities, but none are bringing the ball up or initiating the offense on a regular basis. And honestly perhaps this, after decades of big men being the foundational starting point of any championship team, reveals the way the league is trending as much as anything else.

Despite the lack of collective success for the Magic, Vucevic should still really be getting more attention than he has. Not only because he’s very good, but also because he ostensibly checks all the boxes for what teams are looking for in a modern center. He can score efficiently, from everywhere on the court, knocking down three-pointers at a good percentage. He can pass well for a man at his position, and has shown himself to be a capable, if unspectacular, rim protector. This year, he’s a definite contender for Most Improved Player, though he has not markedly improved in any particular area apart from three-point shooting, but has instead just made incremental improvements in every aspect of his game, posting career highs in points, rebounds, assists, and blocks per game while also shooting better than ever. It hasn’t been dramatic, just steady, like his game in general.

At the end of this season, Vucevic’s contract will expire and it will be interesting to see how he is valued by teams around the league. It’s easy to see the Magic doing all they can to retain him seeing as he’s their best player, though it’s just as easy to see them deciding to move on considering their lack of success with him along with the fact that they have Mo Bamba waiting in the wings. Any team in the league would be lucky to have Vucevic on their team though it appears unlikely, considering his past seven seasons with the Magic, that he is a player who can instantly transform a team into a contender, or even a playoff team, but after all, there’s only a handful of players like that in the NBA at any given time. However, if he were to sign with a team better than the Magic, he would undeniably be a stabilizing, reliable force in the paint for them and then, perhaps perception of him would be transformed. No longer an anonymous player toiling in Orlando, but a steady hand consistently putting up 20 points per night, helping his team win. Sometimes it’s not players who change, or need to change, but the situations, which then causes our perception to right along with it.

A star is not a star merely for his own court accomplishments, but also because of his style of play. We do not revere Stephen Curry, Russell Westbrook and LeBron James merely because they’re great at basketball. They do not grab our attention because of their efficiency, but because of their dynamism, their ability to make us gasp with shock and delight as they pull off something transcendently unexpected. Vucevic, meanwhile, though able to stuff the stat sheet on a nightly basis, merely seems to accumulate points and rebounds through rote repetition of the fundamentals, scoring primarily through pick and rolls, pick and pops, and post-ups. He’s good in the post, but lacks the flashy footwork of Joel Embiid. He’s a savvy passer, but rarely makes you ask “how did he see that?” the same way Nikola Jokic does. He does everything well, just a shade less well, and a few shades less engagingly than his peers. A Unicorn is not merely a creature who is elusive and magical -- it’s also one that entrances, mystifying the one laying eyes upon it. Similarly, it’s not a lack of numbers or skills that keeps Vucevic from being labelled a Unicorn alongside Embiid, Jokic, and Kristaps Porzingis, but the inability to enchant.