The Business Of Being Kyle Lowry 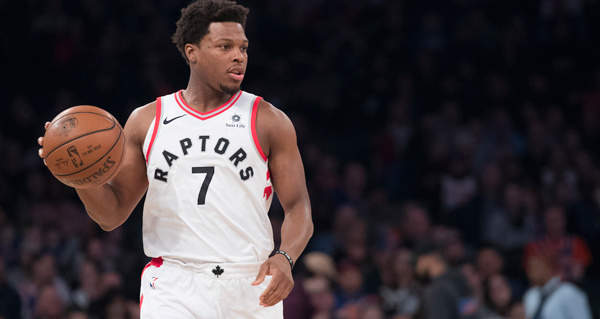 Kyle Lowry is playing an elevated game. The way he carries himself, the quiet confidence he radiates with in passing, his acumen of the game; all traits he has honed with every year in the league and all, in this case, that have very little to do with the part of his job he spends playing basketball. It is evident Lowry has grown on-court as a leader for the Raptors—working against his habits as an ISO player to support Kawhi Leonard, stepping up as the team’s anchor veteran in what had always been a supporting role to DeMar DeRozan—but his growth off the court as a franchise ambassador, and a player maturing to consider the business of his own career has been quieter.

At the start of this season there was a reasonable amount of pressure and attention on Lowry as to how he would cope without DeRozan. The two had been synonymous with the franchise, and with one another, for so long that for many fans, there was no memory prior to either pairing, and it wasn’t so much of an untangling as an outright severance. But Lowry, who was largely silent for the remainder of the summer following the trade, stepped into his first “solo” season fully formed. Aside from one early, intimate and heartbreaking moment where Lowry pantomimed his part of he and DeRozan’s pre-game handshake, it was as if Lowry had spent the time after DeRozan’s trade to comprehend fully what his new role would be and commit to it, completely.

A part of this consideration must have been mapping the immediate trajectory of his own career, and what it would mean to be the franchise anchor highlighted anew alongside someone with the star power of Kawhi Leonard. In the past, Lowry has been a player known to be notoriously cagey when it comes to communicating his motives, on or off court, but in his forthright comments to ESPN following this season's trade deadline, Lowry was measured.

Around the ambiguity the deadline can stir up for a player’s future within a franchise, Lowry acknowledged the necessity of the organization putting itself first. There is a high level of nuance in his response that, as a five-time All-Star, Lowry might have been entitled to more details from his franchise. Were that courtesy extended, he signalled that he could handle an honest discussion, while simultaneously acknowledging that that kind of communication isn’t always possible between a front office and its players.

A degree of self-protection from Lowry is warranted, considering where he is on the arc of return for the Raptors front office. The keeper of so much storied experience and knowledge of team ideology and mechanics, but no longer a player the franchise would consider a rebuild around, to Toronto, Lowry may seem the last link in a chain from present to future that could stand to be cut.

On the business end, Lowry has shown the necessary separation between passion and personality, learning from moguls like LeBron James while also setting a new precedent for players who understand it is not often talent alone that translates to lucrative trade options while securing a sustainable career. Where he was once considered a coaching liability in the combination of these elements, Lowry has become the kind of leader who sees the value in developing young talent not only in support of himself, but to carry on the culture of a team should the larger pieces be parcelled off and abruptly traded, as is always a possibility. It is this growth, and his ability to keep one foot in franchise history and an eye to its future, that makes him such a rare, and valuable player, and what other teams will take him up on if the Raptors don’t.

What makes Lowry attractive as a veteran asset is that while his game may not be as singular as Kevin Durant’s, or explosive as James Harden’s, his capacity for nuance, for being the difference maker in the more mercurial, subtle, even superstitious elements of the game remains unmatched. Lowry is a glue-guy. Has shown this year that when the Raptors still had DeRozan, it was likely Lowry all along who alchemized the team. He is guarded, admittedly keeps a small circle, but also has the capacity to hold his teammates exactly as close as they’ll let him.

Witness his weird, completely improvisational home game player introduction routines, where in the time it takes for his name to be announced he has every member of the team get into a new character, usually along the lines of a loose workout routine, so he can individually check in with each. The show takes seconds, rekindles the sense of team every time, and is more aligned with performance art than the rigidity of athletic routine. With all the meltdowns and fractures we have seen befall supposed untouchable teams this year, Lowry as a foundational support piece to guard against internal splits is a very attractive gain for a franchise in disarray or even those looking to preemptively protect what they are trying to build.

For teams who need talent, Lowry would also act as a magnet. In any road game or occasion where players come together, they tend to gravitate toward him if only for the pleasure of checking in. Guys are happy to see him and he, in turn, seems to have close words for all of them. He is the player’s player; relatable in his bouts of jawing back at a ref, respected for the physicality he backs up that kind of talk with, lighthearted enough to disrupt a tense moment and smart enough to know where it stops when he steps off the court. He’s done this under the radar in Toronto for years and other teams, in need of that kind of draw, no doubt have taken notice.

He is a new kind of example for younger players to follow, for guys who aren’t going be franchise drivers to understand where they can best fit and create their own notoriety in the process. In his athleticism, how he hit his supposed ceiling a few years ago and instead of settling, completely reshaped his own body to give his game a new physicality. On the floor Lowry is an engine, alternating between driving the team with one hand and using the other to play basketball. His quiet, strong numbers throughout a season where he segued the spotlight and stepped back into the role of distributor reflect it. He works, constantly, and if he can’t outmaneuver a guy outright he will throw his whole body at him as a last resort. And despite a few setbacks due to fluke, Lowry has remained largely healthy, spry and unscathed for how often, and how hard, he hits the floor.

Considering the heightened pressure on Toronto come the postseason, now with all the right pieces they had been lacking in previous playoff runs, Lowry’s timing could not be better. Whatever the outcome he’s shown his significance. If the Raptors can push past familiar postseason snags to sit farther than they have before, then it’s Lowry that largely got them there. Should they flame out, then he’s created the right kind of distance for it not to sit heavy, and solely, at his feet. In taking this season to step back into the role of team anchor and support, Lowry has put the best aspects of himself forward. Framed this way—as playmaker, glue-guy, savvy ambassador and thoughtful manager—Lowry has shown that it is possible to elevate all the right aspects in the business of putting a player’s career first without sacrificing loyalty and contribution to the team. When it comes to smart players, Kyle Lowry is the whole package.