For Joel Embiid, It May Be Now Or Never 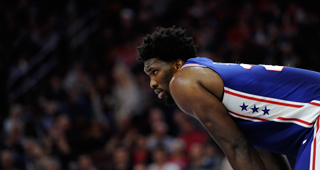 At halftime of Game 2 of the first round matchup between the Philadelphia 76ers and the underdog Brooklyn Nets, the Sixers were holding on tight to a one point lead and it looked very likely that they would quickly fritter it away, falling behind 2-0 in the series.

Making things worse, Joel Embiid, the Sixers’ best player was not looking like himself. A normally great defender, he was failing to stay in front of Brooklyn’s perimeter players on switches and did not showcase the maneuverability that fans have come to expect from him on that end of the floor. It was an open question, at least for the duration of that intermission, whether or not he even belonged on the floor considering his injury history and how out of sync he looked due to issues he has been having with his left knee. However, Embiid and the 76ers came out firing in the second half, and he immediately silenced those wondering about his condition, scoring the first seven of what would be the team’s record 51 points in a playoff quarter. The Sixers played as if they were aware of the expectations hanging over them, knowing that it may very well be now or never for them, going on to even a series they could not afford to lose.

Joel Embiid famously missed the first two seasons of his career in their entirety due to a variety of foot injuries, but since he made his debut in 2016, he has proven to be worth the wait. In the two seasons that he has played more than 60 games, he has been voted an All-Star starter. Last season, Embiid was named to both the All-NBA and All-Defensive Teams and is likely to be a member of both yet again this year. Now, just in their second year together Embiid and Ben Simmons are indisputably the best young duo in the league, and theoretically look poised to contend for years upon years regardless of what happens this offseason with Jimmy Butler and Tobias Harris.

But that’s been the case with several other young duos who never reached the promised land that had, at one time, seemed so assured.Penny Hardaway got injured and Shaquille O’Neal left for Los Angeles; Stephon Marbury demanded a trade due in part to jealousy of Kevin Garnett’s massive contract; Russell Westbrook and Kevin Durant never won a title due to season after season of freak injuries and bad luck. Championship windows tend to open due to years of planning and foresight, but they close much more quickly, often without warning. The Sixers know this and are acting accordingly, yet it also seems likely that they’re trying to maximize the current moment due to the uncertainty of whether or not Embiid’s body is capable of a long career.

Being a professional athlete is not like most other jobs in innumerable ways, but perhaps the most hard to accept for the athletes themselves is the built in finitude of it. After spending years honing their craft, trying to reach the peak of their profession, spending their adult lives doing nothing else, their bodies begin to betray them and are no able to perform the same feats that were once second nature. There is a built in expiration date for their career, one that is forced upon them as often as it is chosen. Those who can play past their early thirties without showing a steep decline in athleticism and ability are the exception rather than the norm. For some players, though, it does not take years for their bodies to break down. There are some players who, in spite of their immense talent, possess bodies that seem inherently unable to sustain the grind of an 82 game season year in and year out. Bill Walton is perhaps the most notable example — a player who could win the MVP and lead a team to a championship when healthy, but also a player whose feet seemed made to do literally anything besides play professional sports — and now there are worries that Joel Embiid is the next great player to follow in that lineage.

I wonder how much Embiid reflects upon the risk of injury, whether while in the midst of a game or while just resting at home on an off day. I cannot imagine how frustrating it must be to know that you are one of the best in the world at what you do while simultaneously wondering if your body will allow you to showcase that ability for any length of time. When he told Cassidy Hubbarth after a March defeat of the Celtics that he is “the most unstoppable player in the league” it was no idle boast. Embiid is good enough to push back against the growing marginalization of the traditional big man, good enough at scoring down low that the fact that three is greater than two hardly matters in light of how great he is at reliably scoring two points whenever the ball is fed to him in the low post. Sure, teams can foul him, but unlike many other big men, he can knock down his free throws at an eighty percent clip, making any Hack-A-Joel strategy a losing one. All opposing defenders can do is hope he misses or falls in love with taking 3’s. Failing that, well, you’re in for a long night.

Joel Embiid is both a throwback and a renunciation of present trends in basketball strategy. It’s been an open question if a player like him could be a legitimate star, and some have asked if superstars of the past like Hakeem Olajuwon and Shaquille O’Neal would be run off the floor in a league that no longer values post play as it once did. Embiid singlehandedly shows the silliness of such questions and that this style still works — you just have to be transcendently talented in order to pull it off. Thankfully for the Sixers, he is as transcendent and talented as any big in recent memory, blending size, agility, and a vast array of sly moves down low in a way that has not been seen in several years.

Yet the question remains how long it can last. In some ways, it all feels like some ancient tragedy, this being gifted with unbelievable talent that one may never be able to fully actualize due to inherent limitations beyond their control. Maybe his inability to get on the floor and then stay on the floor over his first three seasons was an unfortunate aberration and the Embiid who has been able to play 63 and 64 games the last two seasons is a more accurate reflection of who he will be moving forward, but there is just no way to know. Considering how well he’s played when on the floor, perhaps such concerns are unnecessary yet the specter of a career ending, or at least career inhibiting injury hangs over him every time he takes the floor. I’m still not at the point where I can watch him fall after a hard play near the basket without instinctively worrying about whether or not it will affect his career trajectory. For Embiid, this season may not necessarily be now or never, but in light of his previous struggles to stay on the court, it very well could be.