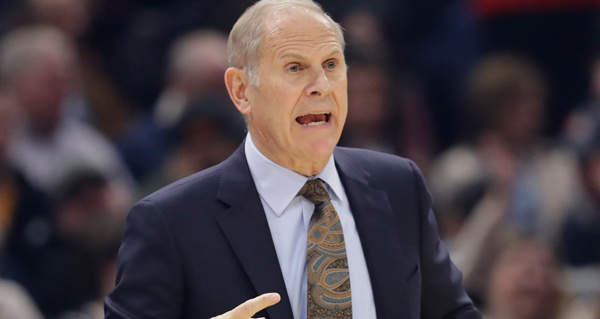 “Put a little mustard [on those passes]!” — P.J. Carlesimo, very shortly before getting choked by Latrell Sprewell

By some edict apparently issued by John Wooden around the time the interstate highway system was being built, every college basketball coach is considered an educator. It doesn’t matter if all they teach are pick and roll coverages, or that they’re more like the kings of prestigious satellite empires than part of the fabric of their university. They see themselves, particularly when they’re backed into a corner by news of recruiting violations or looking to justify cussing out their 19-year-old point guard on national television, as basically the same thing as a biology professor. Their primary function isn’t winning games so much as explaining concepts and handing down hard-won knowledge. They are in the personal growth business, Socratic mentors and surrogate fathers to athletically gifted young men. This is obviously what the job is, and we can all agree that these brusque and frequently reddened fellows are well-suited for it, because who knows more about the world and how to live in it than somebody who routinely locks himself in an office until three a.m. trying to figure out how to keep West Tallahassee A&M off the offensive glass?

John Beilein, who resigned from the Cavaliers’ top job on Tuesday, is by any measure a fine coach. Old Van Gundian heads who clawed their way up every increment of the ladder fetishize positions at small colleges in upstate New York as if that’s where the soul of the craft lives—I grew up 45 minutes north of Le Moyne, where Beilein was in charge for nine years; nothing truly lives in Dewitt—but there is something to be said for D-II and mid-major ball, where the clipboarder-in-chief is always trying to stymie a flood with a few pool cues, a bandana, and some scotch tape. It’s coaching as problem-solving as opposed to coaching as recruiting or ego management. John Beilein’s been really good at that sort of thing, from Le Moyne all the up to Michigan’s relatively lofty perch. He’s never had, say, John Calipari’s caliber of player at his disposal, and he’s still won plenty of games. In fact, the only place the wins didn’t comes steadily was in Cleveland. That’s 40-plus years of success and one sizable misstep. Still a career to be immensely proud of.

And of course Beilein is a teacher, in a literal sense. He’s just not—teacher is a title that’s loaded with sacred meaning. Jesus was a teacher; Martin Luther King was a teacher. Teachers are the best among us. They provide intellectual nourishment and spiritual inspiration and ask for little or nothing in return. Basketball coaches who pull down multi-million dollar salaries on the backs of unpaid athletes, or draw it from the ample cash reserves of a mortgage baron, are not the best among us. You can be Jesus or you can take Nike’s money. The latter doesn’t make you a bad person, but it reveals that you are in some sense out for yourself. Many college basketball coaches—see our friend Bobby up there—use teacher to describe what they do for a living as a profound act of generosity. As if everything, down to deafening the referee after a blown block-charge call, is in service of a calling higher than their own competitiveness. It’s not wrong to feel a sense of accomplishment when you’ve worked with your center on his help defense for months and he swats a shot out of bounds late in a big game, but it is what it is. You’re building a winning basketball team, not saving souls.

You can already hear the grumbling from Beilein’s brothers in the college ranks. Well, you can’t teach NBA players. Except that’s so obviously not true. Pro players are adding to their games all the time; surely somebody is helping them do it. The Bucks don’t have the best defensive rating in the league because everybody in their rotation independently decided to defend harder. They’re bound watertight by principles Mike Budenholzer and his staff have taught them. It’s tougher to teach in the NBA than in college because the coach doesn’t hold every player’s fate in his hands. So they put up with less yelling, less nitpicking. It’s been reported that Beilein alienated the Cavs with the exact kind of stuff NBA players hated successful college guy and disastrous pro coach P.J. Carlesimo for: the dude treated them like idiots and critiqued every dribble. 20-year-olds on scholarship will grudgingly accept this, 20-year-olds with guaranteed contracts will be annoyed by it, and 30-year-olds, who know exactly what it sounds like when an adult is condescending to a child, will actively revolt.

J.B. Bickerstaff is now the head coach in Cleveland not because he’s some obsequious babysitter who won’t occasionally bench Collin Sexton for shooting on five straight offensive possessions, but because he’s been around the pro game for a long time and has a better understanding than Beilein of when to admonish a player and when to let a mistake pass without comment. And he doesn’t fashion himself a paterfamilias or a prophet. He’s a manager, and his authority will depend upon his ability to communicate his ideas and relate to his players. It’s a difficult task, and we celebrate people who do it as effectively as Gregg Popovich or Rick Carlisle, but the way the job is characterized and what it actually entails are more closely aligned in the NBA than they are at the college level. It’s probable that after four decades on the junior circuit, John Beilein thought he signed up for a different gig. It’s not for everybody. It requires a teacher of significant humility. Beilein apparently lacked the adequate amount.