The Clippers Are Embodying Their Enigmatic Second Star 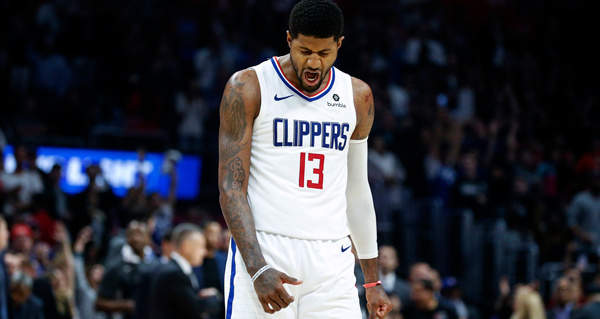 This is weird: Paul George is listed under ingredients, but you can’t taste him. Paul George keeps bringing up the possibility of buying a bigger TV he never actually purchases. His interests include music and hanging out and his politics are having responsible conversations about important issues. Paul George has responded to your dinner invite in a way that makes it unclear whether or not he is coming, or indeed if he has ever eaten at a restaurant. Everybody respects Paul George but nobody trusts him. Not for any insidious reason; it’s just that the guy has a personality like a shifting fog.

He’s had a career of surges and false starts. Nobody knew what he would become when he was drafted 10th overall out of Fresno State. DraftExpress in 2010: “his physical profile is spectacular for a wing… teams are going to have to do their homework on his intangibles to see if he’s capable of developing into the type of player his athleticism could permit him to be in the long run.” George was built like Tracy McGrady but his game was about as polished at age 20 as T-Mac’s was at 18. It unsurprisingly took George a couple years to adapt to the NBA. He needed to put on some muscle, work on his handle. But by his third season, he was an emerging talent, and in his fourth season, he played like an MVP candidate through the first half and though he dwindled a bit in the second, he established himself as one of the best young players in the league.

The following summer, he snapped his leg in two during a glorified Team USA scrimmage, which cost him nearly all of the 14-15 season. He came back slightly rusty the year next year, then with a vengeance in 16-17. After informing management that he wanted to stay in Indiana long-term, George pulled an about-face during the 2017 offseason, telling Kevin Pritchard—who apparently knew him about as well as the rest of us—that he wouldn’t be signing an extension and would walk the following offseason if he wasn’t traded. So Pritchard shipped his star to the Thunder.

It’s not like Paul George is the only fickle and difficult to grasp player in the NBA, but his brief OKC tenure was absurdly twisty. In his first season, his natural passivity combined with Russell Westbrook’s insatiable oxygen thirst made for an uncontentious yet thoroughly suboptimal fit. The consensus around the league was that, though Sam Presti was smart to gamble on George in a contract year, PG would almost definitely join one of the two Los Angeles teams, considering he grew up just outside LA and the Thunder thing didn’t seem to be working out. Instead, he re-signed on a four-year deal, citing unfinished business—after crashing out of the opening round of the playoffs, no less—and seeming very much in Westbrook’s thrall.

He was awesome for most of the 18-19 season. As in Diet Durant through 60 games: 28.6 PPG on 44.8 percent shooting, 8.1 RPG, 4.3 APG, and lockdown wing defense when Billy Donovan required it. And then he screwed up his shoulder and his play dropped off. He was far from poor in the Thunder’s first round, five-game loss against the Blazers, but the way he had been dominating over the winter, you might have expected him to be the best player in the series. He wasn’t: that was Dame Lillard, who ended OKC’s season over George’s outstretched arm.

And that was the abrupt end of PG in a Thunder uniform. He had a long-term contract, but whatever: Kawhi wanted to team up with him on the Clippers, so everyone involved worked to make that happen last summer. It’s difficult to assess the progress of that arrangement because George missed the first three weeks of the season recovering from shoulder surgery and has been bothered recently by a bum hamstring. He’s neither thriving nor struggling alongside Kawhi, who’s in and out of the lineup himself due to his idiosyncratic rest schedule. The Clippers are definitely a title contender on talent alone, and George is big part of that, but where the Lakers, Bucks, and even the Raptors, Celtics, and Nuggets are assembling quite impressive regular seasons, the Clips’ ability to win games in May and June is still an on-paper proposition.

In that respect, they embody their secondary star. We can count on Kawhi to arrive when the moment swells, but Paul George, even at age 29, nearly a decade into his career, remains somewhat enigmatic. He’s never been exactly the same player for more than a season at a time, and though when he’s at the peak of his powers, he’s an overqualified sidekick, there is also something immutably sidekick-ish about him. There’s an ethereality about George, and it’s a quality that he shares with, say, Jeff Green, which is ridiculous on its face and perhaps even at its core. This might just be a trick of perception, George’s surface-level placidity undermining his performance. Maybe we should trust the numbers and ignore his tendency to play between the game’s rhythms rather than atop them. Tim Duncan, after all, was the king of the quiet 25-and-14 and nobody ever questioned his utility. Yet the impression that George is a little unsteady, a little unreliable, will persist until he can assemble a rock solid playoff run.

His body might not allow that to happen this year. It’s always something with Paul George. This whole Clippers experiment, it’s worth nothing, is yet another temporary arrangement. He and Kawhi are signed up for one more season after this one, and then either one of them can opt out of their deals. That’s a significant worry for Clippers fans, but it should also concern George. He’s right in the thick of his prime, which won’t go on forever, and on a potentially great team that could dissolve in the startlingly near future. Legacies shrink and bloom in brief windows like this one. Perhaps that’s especially true for a player everybody respects but nobody totally trusts. At some point, you have to grab people by the lapels and make them believe in you.