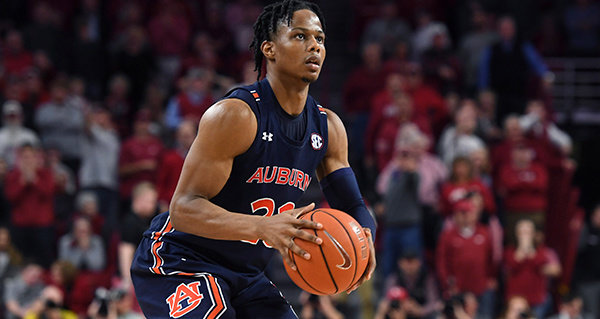 The current draft class is considered weak in top tier talent by most draftniks. That has opened the door for prospects who were less well known entering the college season to take huge jumps in recognition, with some of those starting to be speculated as potential top 10 picks.

One of those players is Isaac Okoro.

The surprising part about his rise to prominence is that Okoro is not tasked with shot creation responsibility at Auburn, ranking only fourth on the team in usage rate among rotation players. 69 players ranked on ESPN’s top 100 currently have a higher sum of field goal attempts and free throw attempts per 40 minutes than he does, and 59 players have a higher average of assists per 40 minutes.

Therefore, the hype supporting his viability as a top 10 pick is mostly based on his defense, which is unusual because NBA teams tend to reach for shot creators and shot makers or seven-footers at the top of the draft – guys they can more easily perceive as franchise linchpins.

Okoro is a very good on-ball defender, though, and also a positive as a help defender.

This class doesn’t have all that many, if any, wings most people can envision becoming the sort of jumbo shot creator that is the archetype most commonly associated with what a star looks like in the NBA right now. Pure big men continue to become increasingly more devalued by the minute. And all of the smaller/physically weaker guards in the mix to get drafted in the lottery have some major drawbacks. So, in a year where no one is unquestionable, perhaps taking an ace defender who can maybe start making shots soon enough really could be the most compelling route.

The Powder Springs, Georgia native has shown everything needed to be viewed as an isolation stopper.

He bends his knees to get down in a stance comfortably, has as many lateral slides as needed in him to stay in front one-on-one and shows somewhat impressive lateral quicks to stay attached if shook side-to-side.

Against power-based similarly sized players, Okoro has proven himself physical enough to leverage his 225-pound frame into chesting up and containing dribble penetration through contact.

That was also the case when he’s faced these big wings in the post or picked up the occasional bigger player on a switch, as Okoro has generally held his ground and showed the presence of mind to guard with his arms up near the rim to force the opponent to shoot/finish over his eight-foot-four standing reach.

Given his general size, very few players at the collegiate level have managed to score around or over him with him in the shooter’s/finisher’s personal space.

He has shown glimpses of being able to crossmatch onto smaller players as well and generally with the same level of effectiveness. Okoro works to go over a screen at the point of attack and though he struggles to navigate a pick cleanly at times, given his frame, he most often manages to recover quickly back in front if aided by a big man who can stop the ball.

He stays on a stance away from the ball and has not only shown to be trustworthy executing the scheme but also capable of creating events and making an impact in the hidden areas of the game.

Okoro is active and attentive to his responsibilities coming across the lane in help defense and stepping up to the front of the rim as the last line of defense. He is not only a willing charge drawer but also a quick leaper off two feet to challenge shots via verticality or block a shot more regularly than just on occasion, as he’s averaged 1.2 blocks per 40 minutes so far this season.

Okoro does play with a good deal with energy jumping passing lanes but his below average six-foot-eight wingspan for someone with his height has prevented him from being a truly elite playmaker in that area, as he’s averaged a somewhat disappointing 1.3 steals per 40 minutes.

Perhaps more impressive of all regarding his defensive chops, though, are the plays he makes that don’t get tracked in the boxscore.

Okoro has shown very good awareness switching on the fly, either to make up for a breakdown or to scram teammates out of bad matchups in the post.

Besides blocking some shots and challenging them via verticality at the rim, Okoro has also made a few preventive rotations that discouraged opposing drivers from taking it all the way to the basket from time-to-time. That sort of awareness suggests he can maybe develop into a big wing who can steal minutes at center in the future, which can be of great value for a league that has increasingly toyed around with the idea of giving up on the concept of a center over the last few years.

Okoro can also run shooters off the line and stay attached off the bounce, showing remarkable body control with his hard closeouts.

And though he’s collected just 8.9% of opponents’ misses when he’s been on the floor, Okoro contributes to the rebounding process by mixing it up on scrums and boxing out whoever is nearby.

The easiest way to project him on offense is as a spot-up shooter but his shooting is probably the most underdeveloped aspect of his skillset at this point.

His release does not seem particularly broken or anything but probably needs all sorts of adjustments to become more consistent and repeatable on an every attempt-basis, especially if contested, as the structure of his approach tends to disintegrate completely when he is sped up by a closeout.

Okoro has missed 44 of his 60 three-point attempts and 19 of his 22 two-point jumpers so far this season. The touch looks good enough for him to be expected to improve with some better guidance and more directed focus into what will probably be his swing skill in the pros, but he has hit just two thirds of his 110 foul shots, which raises some skepticism over whether that’s really true.

At this point of his development, Okoro is the most threatening as a scorer on straight-line drives. He hasn’t shown a particularly explosive first step, a whole lot of side-to-side shake or any sort of resourcefulness operating in isolation, so most of those drives tend to take place against a scrambling defense.

And while taking off out of a ball reversal, attacking a closeout or off a live dribble, Okoro has proven himself capable of getting all the way to the basket in volume, relying on his strength to maintain his balance and his momentum forward through contact or by mixing in the occasional spin move to maneuver his way through traffic – taking 62.9% of his live-ball attempts at the rim, while averaging 5.7 foul shots per 40 minutes.

He is an explosive leaper off one foot with time and space to go up off momentum but can also gallop into two-foot leaps to adjust his way around a rim protector stepping up between him and the basket or elevating into that rim protector’s chest to neutralize a potential shot blocking threat. Okoro has also unleashed a well-coordinated euro-step in some of these instances as well.

Though he hasn’t shown a particularly versatile arsenal as a finisher, Okoro has impressed with his touch around the basket, especially with his left hand – converting his shots at the rim at a 67.6% clip, with 70.2% of his 94 makes unassisted.

There are a few possessions where he’s had the opportunity to run a side pick-and-roll to keep the offense moving and his passing has been eye catching in some of these instances (13.3% assist rate), but those plays are few and far between within his overall profile right now and not enough to presume confidently what he could look in a real shot creation role.

[1] Without shoes, measured at the 2019 Nike Hoop Summit, according to The Stepien

[4] According to data available at hoop-math.com