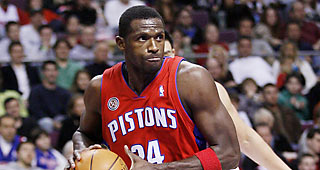 It wore him down after a while, because playing with Chris Paul does that to you, but previously unseen possibilities bloomed for Blake Griffin when Paul was traded to the Clippers in December of 2011. Blake was coming off a Rookie of the Year campaign in which he established himself as an heir to the thunder-dunking legacies of Shawn Kemp and Larry Johnson, but he was also, lamentably, a Clipper, which going by three decades of Donald Sterling-helmed putrescence, meant basketball death: putting up 21 and nine on 30-win teams until you forced your way out of town. If Paul had ended up, as was initially planned, on the Lakers instead of the Clippers, we likely would have spent the bulk of Blake’s prime enjoying his highlights and skipping his games, wondering exactly how good he would be on a competitive team. And that would have been a shame because time was short for Blake. At age 31, his body is almost completely broken down. His career has been two acts long, and it doesn’t look like there’s going to be a third that isn’t painful to watch. Thankfully he got to participate in a handful of playoff runs and a bunch of midweek primetime matchups before injuries obliterated the back end of his prime.

Otherwise he might have ended up like Antonio McDyess. Coincidentally, McDyess was set to become a Clipper himself when he was drafted second overall in the 1995 lottery—an at-the-time totally reasonable selection ahead of Kevin Garnett and Rasheed Wallace—but the Clips traded him to Denver in a deal for Rodney Rodgers and a future first-rounder. Beyond Sterling’s singular squickishness, there wasn’t much of a difference between the two franchises at the time. They were both broadly incompetent basement-dwellers with a dearth of talent and very few national TV appearances. In obscurity, McDyess made the All-Rookie team in his first season and posted 18, seven, and nearly two blocks per game in his second.

Numbers don’t really describe young Antonio McDyess, who had a 42-inch vertical and the constitution of a concrete highway divider. He played fast and mean, with the kind of abandon unique to physical freaks in their early 20s, where they’re careering from impulse to impulse, not putting it together so much as putting it all on display. McDyess in those first two seasons tried to swat everything at the rim, busted out tomahawk slams in traffic, put double moves on his elders just to watch them lunge at ghosts along the baseline. There was actually quite a bit of nascent subtlety to his game—he tipped blocks to himself; he had a soft touch from 15 feet—but his defining trait was the power and suddenness with which he lanced through the lane. With that nigh peerless athletic ability as his foundation, he could have become a star.

That only kind of happened, and it didn’t last long. The Nuggets traded McDyess to Phoenix in the summer of 1997, which was his Chris Paul Comes To The Clips moment. He was a perfect fit as a screen-and-slash center and part-time post-up option with Jason Kidd feeding him easy dunks and frontcourt-mate Cliff Robinson’s shooting giving him plenty space to operate. McDyess’s efficiency numbers took a leap, but more than that, for a short time, he realized the utility of his immense gifts. There’s a theoretical quality to players who excel on bad teams. Trae Young is suffering from this syndrome at the moment. He’s undeniably talented, but questions abound about what will happen when he can’t just do whatever he wants, when he’s got teammates who need the ball too and when the games haven’t already been decided by the end of the third quarter. McDyess proved that his act travelled, that the whole rim-rattling golem thing meaningfully contributed to winning basketball. He was a two-way force on one of the most exciting teams in the league.

And then he returned to Denver. It makes about as much sense now as it did in 1999. McDyess had finished his three-year rookie contract and could have signed with any franchise that would have him. With the Suns interested in bringing him back and the lockout pushing the upcoming season into January, he got it in his head that he wanted to rejoin the Nuggets and contacted GM Dan Issel, who promptly flew McDyess in for a meeting. Shortly after landing, McDyess began to have second thoughts. The way he tells it: “I called Jason Kidd and told him ‘I don’t know if I want to sign here man.’” Kidd immediately grabbed Rex Chapman and George McCloud and hightailed it to Denver.

A blizzard vaulted over the Rockies that night. McDyess and Issel were in the owner’s suite at McNichols Sports Arena watching the Avalanche play the Flames—Patrick Roy had visited before the game and given McDyess a signed goalie stick—as Issel pressed the ambivalent big man to sign a six-year, $67 million deal. Kidd had told McDyess hang tight and don’t make up your mind about anything until I get there. Problem was, Issel knew Kidd was coming and had instructed arena staff to prevent he and his teammates from entering the building. While the Suns’ envoy stood out in the snow arguing with security, McDyess relented and accepted the Nuggets’ offer.

Over the next three seasons, he was excellent—20 and 10 on 49.3 percent shooting—for teams that ranged from mediocre to outright terrible. He posted 25 or more points in 51 games. The Nuggets’ record on those nights: 19-and-32. McDyess played alongside some pretty good players like Nick Van Exel and young versions of Raef LaFrentz and Chauncey Billups, but the rosters had no depth and after firing Mike D’Antoni during the 1999 offseason, Dan Issel tried the old self-appointed head coach maneuver that has worked out for Gregg Popovich and nobody else.

In March of 2001, toward the end of his first and last All-Star season, McDyess dislocated his kneecap, and tried to play through it before finally shut things down for good over the Nuggets’ final seven games. Attempting to tough out the injury proved disastrous. He ended up missing nearly an entire calendar year of basketball before returning in noticeably diminished form for the tail end of the 2001-02 season. Then the Nuggets shipped him to New York, where he came down funny on a putback dunk in the preseason, broke his kneecap, and sat out 2002-03. After three surgeries over a 19-month span, the spectacular Antonio McDyess who failed to carry a series of lousy Denver teams and thrived in his lone year with the Suns was extinct. He had to reinvent himself as a midrange jump-shooter and capable positional defender. He no longer terrorized penetrating point guards. When he caught a pass under the basket, he pump-faked and then laid the ball in.

This dilapidated version of McDyess assembled a few admirably productive seasons as a dependable, coach-approved vet with the post-championship Pistons. It speaks to the intelligence that had always underpinned his exhilarating style that he was able to play well while possessing the functional mobility of a man with one foot stuck in a bear trap. He had one moment in particular with Detroit—Game 4 of the 2008 Eastern Conference Finals, a double-digit Pistons win over the Celtics, in which he grabbed 16 rebounds and scored a game-high 21 points, almost all of them coming on long twos. You can see in the highlights that after the second jumper goes in, Dice is fired up. And then the shots keep falling.

While this is not exactly the same as, say, dropping 39 points on Karl Malone, it’s something McDyess had barely been able to access throughout his career: the sense that what you are doing truly matters. This probably feels great whether you can jump out of the gym or not at all, but the aesthetics are certainly different. Vintage, high-flying Antonio McDyess in a Conference Final would have been a sight. But time gets away from us, decisions create consequences more permanent than we’d initially imagined. McDyess had few relevant moments before his body gave up on him. It came down to one bad choice and a crushing amount of bad luck. He retired as a persevering figure and a well-liked teammate—and a dream about what could have been.