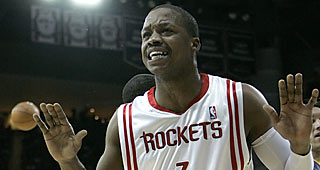 Over the course of his nine-year career, Steve Francis played in five playoff games. All of them came in 2004, at the tail end of his time in Houston, the spring before the Rockets swapped him out for Tracy McGrady and never looked back. Nobody truly expected Francis and company—Yao Ming in his second season, Cuttino Mobley, a pretty much past it Jimmy Jackson—to beat the defending champ Lakers in the opening round, but Kobe and Shaq were headed for a divorce and the smog-eaten edifices of Karl Malone and Gary Payton were providing more starpower than production. Emblematic of the fast-concluding Stevie Franchise era, the Rockets had an outside shot to pull off the spectacular and didn’t come close. They lost to the Lakers in five.

This was not, strictly speaking, Francis’s fault. When Kelvin Cato’s getting nearly 30 minutes per night, somebody’s screwing up, and it’s not the starting point guard. But Francis was shipped out two months later because he had run his course in Houston, both embodying and failing to compensate for the Rockets’ early aughts shortcomings, starring—occasionally really impressing—for a series of teams that struggled wanly in the bottom half of the Western Conference as fans and media still able to recall the previous decade’s back-to-back championships grew frustrated with a star who put up numbers but couldn’t secure enough victories. “Think of it like the caged gerbil running on an exercise wheel. There it goes, frantically going 100 mph, chugging and churning, making great time. But, in the end, it has gone nowhere and still is in a cage,” John P. Lopez wrote in the Houston Chronicle after the Rockets’ Game 2 loss to the Lakers. “That’s Francis.”

That’s snippy, reductive newspaperman snark—the same paper lost its damn mind earlier in the season when Francis missed a team flight because he was attending the Super Bowl—but Francis did shine early and then stagnate in Houston. He arrived in 1999 as an athletic marvel out of Maryland—brashly refusing to play for the Vancouver franchise that drafted him—and he was effective right away, posting an 18-and-6 in his rookie year. He was needlessly and exhilaratingly flashy, and powerful for his size. Unfortunately, like many of his point guard contemporaries, he was less of a floor general than a too-short two-guard, and he understood his early, uneven success as a blueprint for the rest of his career. If I’m this good at 21, I’ll be Jordanesque by 25. This wasn’t an uncommon delusion. Francis’s peers had all grown up watching Jordan drill shots nobody else should take. Kobe and Iverson were ascendant. Iso-ball was in full bloom.

That brutal, stubborn style was particularly legible to Francis, who relied on a superhuman inner strength to persevere through a difficult, poverty-stricken childhood. He sold drugs at a young age, had a father in federal prison, and moved into an apartment with 18 other people after his mother died while he was in high school. He dropped out during senior year and nearly dropped off the national basketball map altogether before salvaging his prospects playing community college ball and a single season in College Park. It was a miracle that he made it to the NBA, and that miracle was primarily self-delivered. So, sure, Francis talked ceaseless smack and tried to embarrass his man one-on-one. He took a lot of tough shots. He wanted to win the game on his own terms, because his experience told him that was the best way to handle any challenge. He simply didn’t have the ability or craft to make that approach work on a better-than-sporadic basis.

You could have said similar things about Baron Davis or Stephon Marbury, but Francis was the least effective of his era’s prominent point guard gunners. Lacking Davis’s handle, he turned the ball over too much, and Marbury, as apt as he was to take 15 dribbles and heave, was a far superior playmaker. And Francis didn’t refine his game as he aged. He remained a streaky shooter and his defense was reliably atrocious. He couldn’t hit Yao Ming with a solid entry pass; he kept chucking from midrange long after it became clear that his greatest strength was attacking the rim and drawing fouls.

Who knows whether any coach could have gotten through to Francis, but he certainly wasn’t well-served by playing when he did. Iverson’s charismatic buccaneering was filling every smallish guard’s head with bad ideas and the game was organized as if to intentionally antagonize players like Francis. Offenses were much slower than they are now—Francis was rapid and forceful in the open floor, but Rudy Tomjanovich and Jeff Van Gundy employed systems that were plodding even for the time—and with three-out sets as the norm, there was denser underbrush to slash through on the way to the basket. In retrospect, Francis was fighting against a lot more than his id. A few more high screens and some additional room to drive might’ve helped.

The end of his career was ugly. Persistent knee injuries, another death in the family, a drinking problem. Isiah Thomas. But those last five playoff games in Houston were it—the league wrote off Steve Francis after that. He was, of course, the last one to know it. His sense of himself was never as keen as it needed to be. But to give him credit, he got as far as he possibly could while being convinced too strongly of his own gifts and methods. Considering where he started from, the myriad ways he was set up to fail, it’s impossible to argue Francis wasn’t more right than wrong.