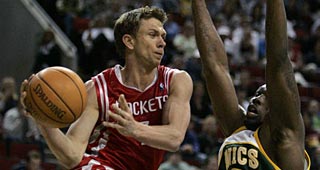 The once and future Czar of the Telestrator was at home in Cleveland. Mike Fratello had studied under Hubie Brown as an assistant with the Hawks and Knicks, and like Hubie, he required complete subservience from his players. Some coaches seem happiest when their teams are less than great, because it allows them to say things like we are not talented enough to make mistakes and install rigid systems of behavior that, if followed to the letter, ensure that no mistakes will ever be made. This is apparently more professionally satisfying than just letting Penny Hardaway cook. It makes you feel needed.

When Fratello told the Cavaliers they were not talented enough to make mistakes, he was basically correct, and so they dutifully executed his rugged defenses and deliberate offenses, with modest success. It is something, certainly, to lead the league in opponent points per game as the Cavs did several times under Fratello’s instruction, but it loses the bulk of its meaning when your possessions have Tarkovskian running times and you keep losing in the first round. The approach worked and it didn’t, and primarily it was hell to watch. Fans and media blamed Pat Riley for ruining basketball in the 90s because they were forced to suffer the Knicks, who made deep playoff runs every season, but Fratello’s Cavs were doing equally dismal work in .500-ish obscurity.

Bob Sura started living under Mike Fratello in 1995, when Cleveland selected him 17th overall. It was one of those picks that made you question whether the front office and the coaching staff were on speaking terms. Sura wasn’t a poor choice on his own merits, but his style was an affront to Fratello, who wanted very specific things out his guards, none of which were Sura’s forte. He wasn’t a floor general who could get the team into their sets and feed the post. He wasn’t a knockdown shooter. He didn’t defend well. His strength was improvisation; he was a slick-handling combo guard before that concept had fully arrived, a kind of lower-middle class Jamal Crawford who built his game around his first step. Drive and attack the rim, drive and kick, drive and pull up. He could score, he could gift the bigs some easy lay-ins. He would also occasionally clock the baseline camera guy with a bad pass. Bob Sura was fun, which Fratello didn’t have any use for. He consistently gave away Sura’s gametime to guys like Bobby Phills, Dan Majerle, and Brevin Knight—players who weren’t necessarily better, but were more cleanly archetypal. Fratello knew what to do with them. He was always yelling at Sura to do something else.

So for four years, Bob Sura strained against Fratello’s short leash. A contemporary AP report: “it seemed [Sura] couldn’t do anything right. Any forced shot or turnover meant an immediate benching from coach Mike Fratello.” Midway through the 1998-99 season, as Sura’s minutes dipped below 20 per night, both Jackie MacMullan and Peter Vescey reported that Fratello wanted Sura gone, possibly in a move to Golden State for Donyell Marshall. Cavs GM Wayne Embry threw his body in front of that deal but by year’s end both he and Fratello were fired and Sura was given a second chance under new coach Randy Wittman.

If that move didn’t work out perfectly—the Cavs went 32-and-50 in 1999-2000—it did at least free Sura up to be himself. Wittman installed an uptempo offense that finally allowed the athletic guard to get out and run. The famously, uh, strategy-agnostic coach cared considerably less about Sura’s lapses and empowered him to push the pace and make plays on the fly. Sura never said a bad word about Fratello, but Wittman’s more forgiving approach clearly helped him. “Being yanked in and out of the game when you make a mistake kind of messes with your confidence,” Sura said in December of ‘99. “Randy was a player. He understands what it’s about and what players go through.”

Sura put up a career-high 13.8 points per game that year and had an assist-to-turnover ratio of nearly two. He played as well as he could, and the following summer he was traded to Golden State, where he put in some entertaining shifts for a few truly terrible Warriors squads that were redeemed solely by the fact that they played fast. Bob Sura was meant to play fast; he played fast like he preferred the sensation of speed to winning, which is good, because those Warriors hardly ever won. His prime, such as it was, didn’t last long and didn’t move the needle for a bad franchise, but it did exist. His potential was briefly realized.

None of this is to argue that Bob Sura’s genius was spoiled at a young age or that he was covertly at the vanguard of anything, or that Fratello was a villain for running his team in a way that didn’t utilize Sura’s skills, but four years is quite a long time to be exist as a kind of negative self, recognized in your work more for what you’re not than what you are, wondering if what you are maybe flatly sucks or isn’t something that anyone needs. And then the situation changes and you can show what you’re capable of, flash that smooth yet frantic energy: cross over, slip past the defender, make your mind up a little too soon that you’re going to stuff it, and finish over the big man anyway.

Most of us are, by definition, no more than average, but that doesn’t mean we’re average all the time, or average the same way everybody else is. The best we can hope for is that we’re able to seize the handful of moments we’re given to be, today if not tomorrow or for the rest of the week, spectacularly self-expressive. Bob Sura got to enjoy that much, for a while. Perhaps the most useful thing Fratello taught him, however unintentionally, was to appreciate the opportunity.