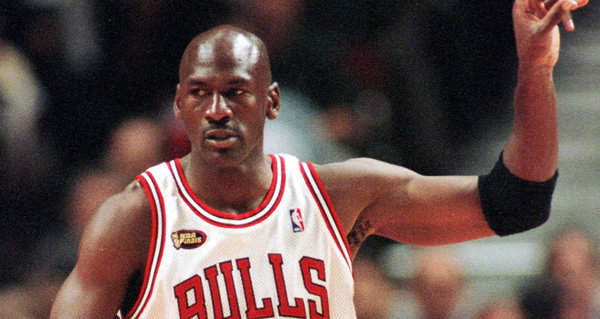 Time machines do not exist. And as any fan of the “Back to the Future” trilogy can tell you, even pretending that they do unlooses a literally endless barrage of questions related to theoretical physics and the very fabric of the space-time continuum. Analyzing what the shifting of even one, mundane wrinkle of history could do on a macro-scale is so ignorant of these concerns that time-machine hypotheticals applied to the ultimately pretty insignificant topic of sports is, perhaps, the very lowest form of pop-cultural discourse. Nevertheless, sports fans and, more prominently, media professionals, persist ahead with thoughtless comparisons between basketball players from the 1990s and the current day, and other, even more extreme adventures of impossible analysis. With the nation on lockdown during a pandemic, turning somewhere nostalgic with “The Last Dance” for their sports fix, this plague of cognitive dissonance is thriving more than it ever has.

“So let me get this straight,” a recent popular tweet about Michael Jordan said. “[the greatest player of all time] didn’t like his GM personally, never demanded a trade, went to work everyday [and] did his job until they won six championships. But kids today will leave high school, AAU and college teams because the coach isn’t into being your buddy or finessing your feelings.” The tweet, reposted around ten-thousand times at time of writing, distills a widely held set of principles projected onto Jordan, but also opposes a different set of principles, projected onto following generations of players, often rendered as superior to Jordan in various ways. Both matrices of basketball thought, along with being very stupid, exist in ahistorical vacuums built to affirm collective biases.

Take, for example, the fact that we actually do have data on how Michael Jordan would behave in an era of the NBA different from the one he won championships in. For two years in the early 2000’s, during a time that—in large part because of his own efforts—players had way more power to curate how franchises worked around their own desires, Jordan played for the Washington Wizards. Though widely ignored (probably because it is, for the most part, sort of depressing), this period of Jordan’s career is very instructive in showing us how power conditions in the league are always changing. On the Wizards, Jordan had the agency necessary to choose his own coach, and he chose a former coach, Doug Collins. Largely perceived as a Jordan yes-man, Collins was dismissed from the Chicago Bulls in the late 80’s for Phil Jackson who, in tandem with lauded assistant Tex Winter, took the ball out of Jordan’s hands more often, in order to build a more comprehensive offensive attack.

This bit of airbrushed early 00’s history has Jordan quite demonstrably rejecting the old-fashioned ethos often projected onto him, given different conditions. Imagining how a cocky young Jordan would navigate the current AAU system is a whole other matter; imagining how he would play in an era during which superstars regularly exceed his previously historical late-80’s usage rate, and also take more than several three-pointers per game, is yet another. We can speculate with a certain amount of certainty that he would, in some way, adjust positively to these realities, but in doing so we’re again in the forest of hypotheticals and butterfly effects and dorm-room philosophy about the nature of time and consequence, somehow entered into by sub-amateurs on these matters, by way of basketball debate.

What’s inarguable, in reflecting on Jordan’s pretty forgotten time in Washington, is his own role in creating the circumstances he exploited. From his culture-changing deal with Nike to his newscycle-stopping premature retirement in 1993, among many other massive moments, Jordan put his hands on how the league worked in a way that no one ever had. And 17 years after Jordan held our attention by deciding whether to play anymore or not, LeBron James held it by producing a TV special in which he decided which franchise would get to enjoy melding their corporation with his. This flex of power was, apparently, more interesting to the average person than anything that had happened since Jordan’s final championship, as it marks the beginning of a quite quantifiable renaissance in the NBA’s cultural relevance.

After LeBron, someone else will show their power in a way that he or Jordan, or Wilt Chamberlain or Bill Russell before them, previously hasn’t. Inevitably, debates that assume non-existent mastery of quantum physics will proceed, centered around how this person would fare against Jordan, or James, or anyone else from the past, on the court. The most interesting part, which won’t be up for debate, is that we will be in the throes of someone so good at their job that they are able to change the way that everyone else goes about doing it. The gravity of witnessing such a person inspires deep, and deeply inarticulable emotion—perhaps this is why our efforts to express what they do to us so often manifest in such useless, gibberistic ways. When this next happens, though, let’s instead engage in a constant, ultimately Sisyphean, but also ultimately beautiful, attempt to understand history—current and past, as it unfolds and has unfolded, instead of play-acting at total comprehension and control.